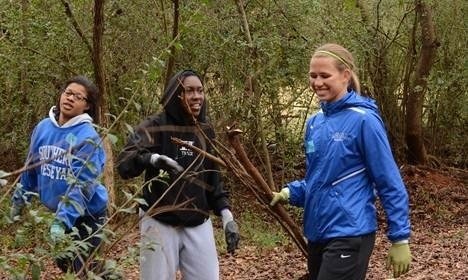 SWU students, faculty, and staff participate in Day of Service

SWU replaces day of classes with community service in Central and the surrounding area.

For the second year in a row, Southern Wesleyan University students took a day off from classes to pursue an important assignment.

Some students handled the logistics of organizing a food pantry, while others cleared mountain trails of limbs and brush left over from winter storms. Others mopped, scrubbed, or did a bit of carpentry work. A group of cast members from “Narnia,” this year’s student production, performed for youngsters at The Growing Place and Central Elementary School in Central, S.C.

Organized by SWU’s Student Life office, Day of Service involved 174 students and 24 faculty and staff members in projects where they could make a difference in the surrounding community.

“The purpose of the Day of Service is to not only give back to the community, but to open our students to a wide variety of service choices and to allow them to choose projects of interest to them,” said Justin Carter, associate vice president for student life at Southern Wesleyan.

Esther Corn, administrator at Gleaning House Ministries in Pickens, was pleased to see the group of students led by Southern Wesleyan Psychology Professor Mildred Williams as they handed out food items to needy citizens trying to put food on their table.

“It means that we’re able to do a few other things that can’t possibly get done just by ourselves. We’re able to pack extra boxes. We’ll be able to get some stuff put up that normally can’t get put up,” Corn said.

“I’m helping people who are maybe less fortunate than I am. It’s just a blessing to be able to help and just to see people smile,” said Zakiyyah Galloway, a junior social sciences major from Anderson who helped out at Gleaning House.

Several other student projects have been taking place throughout the spring semester.