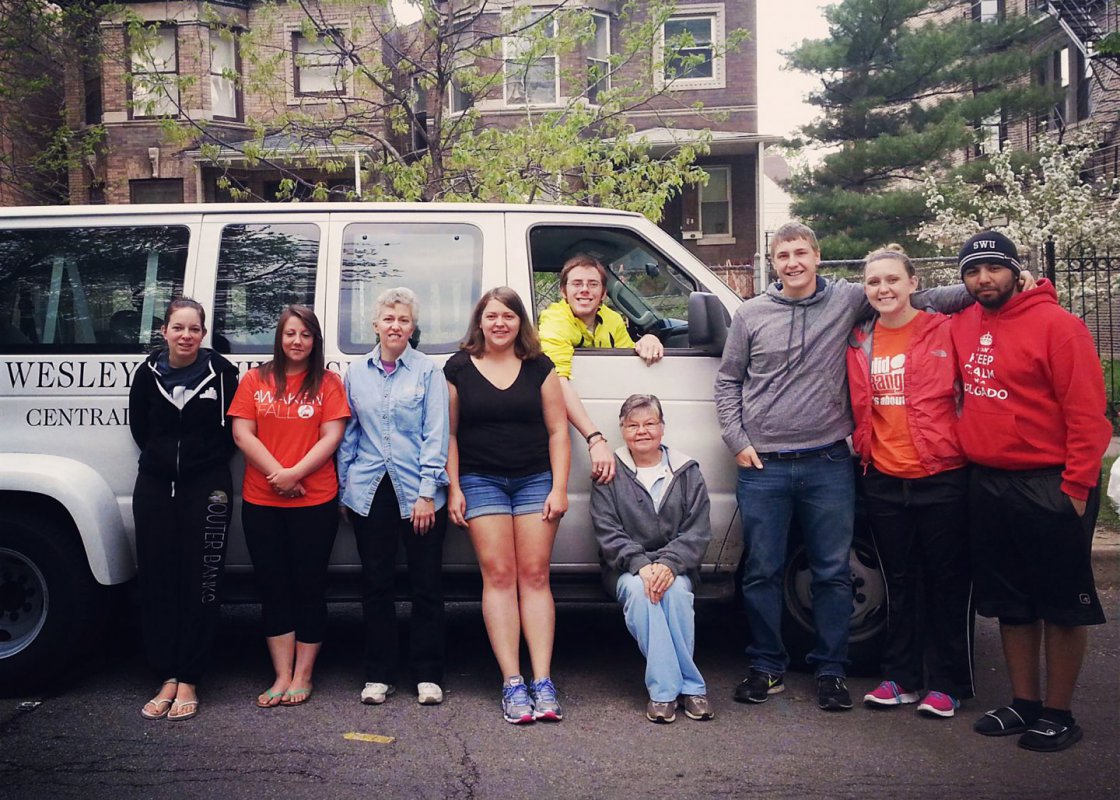 A group of SWU students spent time alongside residents living in the poorest areas of Milwaukee and Chicago as part of the university's "Urban Ministry Plunge."

A group of seven Southern Wesleyan University (SWU) religion students headed for two Midwestern urban centers for a taste of life and ministry different in many ways from ministry taking place in the “Bible Belt” environment of the Central campus.

As this group of students “walked alongside” residents living in the poorest areas of Milwaukee and Chicago, any preconceived notions they had were challenged as they got to know people and became more aware of their situations.

The SWU students were taking part in Urban Ministry Plunge, a course offered for the first time by the university’s division of religion.

The Urban Ministry Plunge considered the question “What would Jesus do in the context of the city?” The ministries visited are living out an incarnational theology, attempting to live as Jesus would by moving into the community and becoming neighbors to bring the transforming love of Christ “with skin on.”

“We had sessions in Milwaukee on incarnational theology, systemic problems in urban areas, on urban youth ministry and urban children’s ministry,” said Mari Gonlag, professor of religion and chair of SWU’s division of religion. “One afternoon we did a prayer walk around the neighborhood.”

As Madalyn Mills of Kernersville, N.C., went with others on the prayer walk, she noticed stark differences–on one street many homes were dilapidated and about to fall down, while on a street a block over, the houses appeared to be well-cared-for.

“It’s not only the houses that show abandonment. Like the houses, the people who live in the ghetto show, feel, and reflect abandonment,” Mills said.

Gonlag added that the students were introduced to Inhabit, a ministry whose aim is to restore neighborhoods, which includes doing rehab on boarded-up houses. Christians are recruited to live in these homes, where they seek to touch lives in the surrounding neighborhood through mentoring, Bible studies, and other activities. While in Milwaukee, they stayed in some of the rehabbed homes.

The students also traveled to Chicago and JUSTembrace, a ministry organized by SWU graduate Sherilyn “Sher” Sheets. As Chicago continues to make news headlines for its violent crime rate, Sheets has been living as a missionary in the city’s north side neighborhood of Uptown for the past four years. Known for its ethnic and economic diversity, Uptown is home to thousands of Chicago’s most vulnerable people. During the last three years, Sheets has lived in and run a hospitality house called JUSTembrace, where she throws dozens of parties each year for the marginalized in her neighborhood.

Some students, including Mills, entered a soup kitchen dressed in a manner similar to someone who is homeless.

“No one knew who I was, where I came from, if I had money or not, if I was educated. I wanted so badly to talk to the woman in front of me because she looked as if she wanted to talk to me, but I couldn’t say anything,” said Mills, adding that she prayed for the woman.

Sheets’ neighborhood is filled with single-room occupancy (SRO) buildings where the urban poor have a room. A lot of people staying in this type of housing have no families and are living alone.

Just as someone might make the corner Starbucks their local hangout, Sheets has done the same at neighborhood soup kitchens and street corners to establish herself as a friend and good neighbor.

Sheets’ brand of hospitality made an impact on Champ Squires of Alcolu.

“After spending three days with Sher and Jordan (a ministry intern) I think I personally saw the best expression of what it means to love your neighbor,” said Squires.

“Being hospitable means you are leveling the playing field between yourself and others – as Sher put it, ‘equalizing the power dynamic and realizing that both of you are human and are broken,’” said Andre Winters of Rockford, Mich.

In his book Dangerous Presence, Jason Butler writes, “The hurting do not need our money, ideas or solutions. They need us–in the flesh. They need our relationship, our listening ear, our hand on their shoulders. They need our presence, not our presents.”