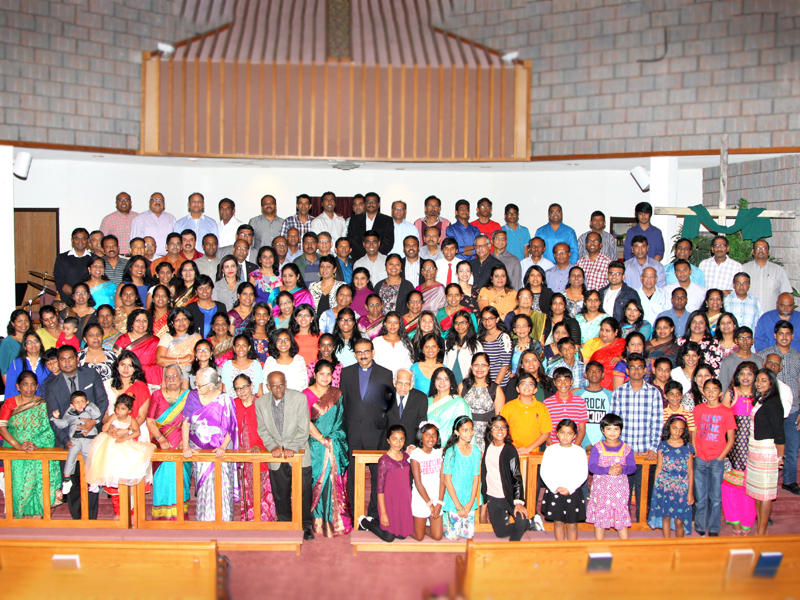 Tamil Christian Church of Canada to join The Wesleyan Church

After 33 years of ministry, the church has voted to move from affiliation to full membership in The Wesleyan Church of Canada.

I rejoice with The Wesleyan Church over the contents of a communication Dr. Albert Jebanesan (Pastor Jebi) wrote to our Central Canada District (CCD) leadership last month, “The year 2019 marks the 33rd anniversary of the founding of the TCCC [Tamil Christian Church of Canada]. We will celebrate this year in the spirit of our full membership with The Wesleyan Church in God’s mission in Christ.

“On March 24, 2019, we held a general body meeting for our members about joining the Central Canada District of The Wesleyan Church from affiliation to      full membership. We are happy to let you know that this was approved by our congregation!”

The note from Pastor Jebi concludes a journey that began in November 2014.  CCC’s leadership and congregation became acquainted with The Wesleyan Church through Rev. George Pryor, pastor of Milliken Wesleyan Church (Markham, Ontario, a suburb of Toronto). Almost five years ago, an agreement was forged with the Milliken church, to rent its facilities for TCCC’s Sunday afternoon service, which is now held weekly. At this point, TCCC also took the steps to become an affiliate church of the CCD.

Pastor Pryor and I eventually met with TCCC leadership to answer questions about what it would mean for TCC to move from affiliation to full membership in The Wesleyan Church of Canada.

On January 25, 2019, TCCC’s leadership met Central Canada’s District Board of Administration (DBA). It was an exciting time for our DBA members to meet, interact and hear about the various ministries of the Tamil church in its local community, such as providing programs for parents while their children are tutored. Internationally, the congregation raises support for war widows and families in Sri Lanka. The DBA unanimously and enthusiastically agreed to accept the TCCC if the congregation voted to merge.

While TCCC is celebrating 33 years of ministry in Canada, its beginning can be traced back to 1971 when the first annual carol sing was organized by Tamil Christians arriving in Toronto from Sri Lanka. Over the next few years, Good Friday and Thanksgiving services were added to the annual Christmas event and the group was joined by Tamil Christians from South India. A Bible study group formed in 1980 that also began to hold monthly worship services. Several years later, the growing congregation began offering two services monthly. The group was formally registered as a church in 1986.

Pastor Jebi served as district chair of one of the three Methodist districts in Sri Lanka, principal of the Ecumenical Theological College in Sri Lanka, and held the office of president of the Methodist Church in Sri Lanka from 2010 to 2015. He and his wife, Priya, moved to Canada in 2015, when he assumed the position of TCCC pastor.

It has been a joyous journey as we have prayed toward this merging of two bodies of believers. The Central Canada District will be enriched by our new members and I look forward with great expectancy to how God will continue to move among and through us.

The TCCC will be formally accepted into the Central Canada District of The Wesleyan Church of Canada this May.