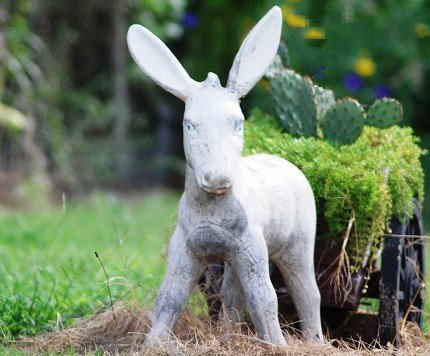 God can use even a concrete donkey to encourage gifts to go toward the Heart of Ministry Offering.

Courtney Magee is a 22-year-old construction manager that attends Cypress Wesleyan Church, in Columbus, Ohio. Recently she was helping her parents move out of the house where she had grown up. She found a concrete donkey lawn structure in the back of the crawlspace. “I know, it was weird,” said Courtney. “I asked my mother what it was and why she had kept it through the years.”

Long ago, when Courtney’s mother was a child, her father (Courtney’s grandfather) came home with his very first paycheck from a new job. He took her and her sister to a store and said, “You can pick out anything you want.” The concrete donkey was what she chose to bring home that day. Now, almost fifty years later, Courtney’s mother still has it.

Courtney said her mother’s story made her smile, but it also made her think about how much God had blessed her. About that time she received her first ‘big girl’ paycheck, as Courtney put it, and she knew she wanted to do something with it that she would never forget. She knew she wanted to give the whole amount away.

Courtney Magee donated that first paycheck to the Heart of Ministry Offering, 2014. She had never heard of female genital mutilation before this. After learning that her money would go to help girls in Sierra Leone who desperately need the Good News that God values human dignity, she said, “I couldn’t think of a better cause.”

Rev. Andrea Summers, director of Wesleyan Women, said, “I am thrilled to include this gift with our Heart of Ministries 2014 donation. But I am even more thrilled to know that the churches in Sierra Leone that are standing up to this injustice have one more person who understands the plight of the girls and is praying for them. This is what it’s all about.”

Only God could use a concrete statue of a donkey hidden in the back of a crawlspace in Ohio to change the lives of girls in Sierra Leone.

“I told Courtney that I would like to find her something tangible when I return to Sierra Leone that would be symbolic of this faith-step. Perhaps someday her daughter or her granddaughter will come across it and she will be able to tell the story of the donkey and the big-girl paycheck and the total elimination of FGM in Sierra Leone!” said Rev. Summers.