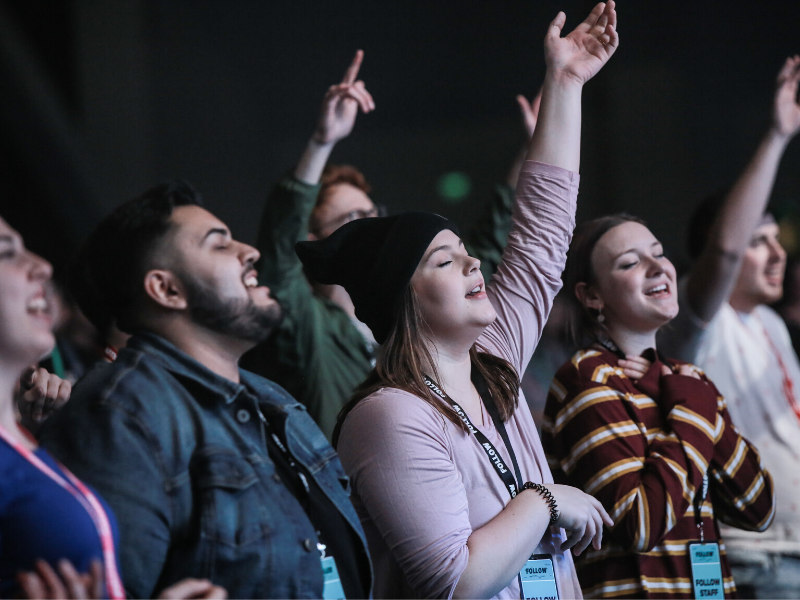 The Follow theme, “There is More,” represented the leadership team’s mission to “unleash a new Kingdom Force into the wonder and mission of God’s kingdom."

If Wesleyan youth were expecting just another international youth conference in Cincinnati, Ohio, in December 2019, they returned home with more.

And the Holy Spirit did, indeed, show up.

For the past two years as Coffin repeatedly prayed for Follow, an image of a young girl approaching a cross would emerge. Her name was engraved on the cross, and she realized Jesus was beckoning her. As she packed up a suitcase ready to follow him, he called her by name and said, “there is more.” She ran toward the cross, not knowing exactly what she was running towards but knowing she must keep running to find out.

“So often we look at our salvation as a period rather than a comma,” said Coffin. “What does it look like for this to be more? Do we actually look forward to what God wants to do more of in our lives — that he wants to reveal more to us and produce a hunger and a hope in us, instead of settling for current circumstances? With ‘there is more,’ he wants to launch us into a kingdom-minded mission.”

A kingdom-minded mission is what the Follow leadership team wanted to convey in its programing, and teens and leaders alike responded. Using the phrase “Jesus, my yes is” (social media hashtag: #Jesusmyyesis) on the last morning, attendees responded to the Holy Spirit’s promptings. Responses included:

Also communicated was that a Kingdom-Force impact is multigenerational.

“We have to look at these kids as disciple-makers now,” said Coffin. “Kids are being sent into spheres of influence — schools, clubs, sports, even their families.”

Follow attendees were reminded that it’s not only ministers who are needed to have a Kingdom-Force impact. Whether someone is a teacher, nurse, accountant, doctor, athlete, gamer or a stay-at-home parent, everyone is called by God to go and be a disciple-maker, to live out one’s faith and calling no matter one’s vocation.

Each person returned home with their personalized response to “Jesus, my yes is,” as a reminder to live out their call to action.

Alana Harrington, a youth pastor from Bethany Wesleyan Church (BWC) in Cherryville, Pennsylvania, and Follow executive team member, saw God move in the hearts of the students she helps lead.

“While God often shows up in ordinary moments, there’s just something different about his presence in places like these surrounded by the Church.”

Twelve youth from BWC attended. Sophie is one of them. Before the 16-year-old attended Follow, she “was in a place of desperate need to be reminded who God is.”

“[At Follow] God shed light on the darkness I’ve been carrying around in my heart and mind, and he has offered to renew them,” said Sophie. “God was able to meet me right where I was and give me the opportunity to receive him like I never have before.”

Sophie understands that it’s more than just attending an event, listening to some messages and returning home unchanged.

“It’s one thing to sit and listen to the message and discuss it afterwards, but it’s another to actively live out the things you have learned,” said Sophie. “It’s like taking the information in your mind and translating it to the language of your heart. I’m excited to live out the commitments I’ve made at Follow and begin to ‘transform religion into vibrant faith.’”

Jennifer Munsell, also a Follow executive team member, encountered God’s movement in her own life at an earlier Follow.

“Follow 2015 was life changing for me as a youth pastor,” said Munsell, assistant pastor at Harvest Church in Greenfield, Indiana. “I got to see every one of my students realize just how real God is and how amazing God is. Because of that, I came into Follow 2019 with very high expectations. Everyone I encountered, from the people on stage to the people straightening chairs, was completely focused on the goal of setting the table for God to speak to students.”

Attending Following 2019 with Munsell were other leaders and 19 teens from Harvest. She noted how God worked in the lives of the Harvest teens:

A guided tour through the National Underground Railroad Freedom Center occurred one day of the conference. Groups went on a Wesleyan-inspired experience illuminating the TWC’s history in abolitionism. Coffin hopes this experience, “shed light on our past as well as called the next generation to discover their place fighting for social justice.”

Anita Eastlack, executive director of Church Multiplication and Discipleship, is encouraged about the future of Next Gen Ministries and its roll in unleashing a Kingdom Force within The Wesleyan Church.

“To unleash a Kingdom Force includes giving intentional energy and priority to Next Gen Ministries,” said Eastlack. “Follow is our denomination’s largest example of inviting students into the heartbeat of the Wesleyan movement while it also takes place in youth groups and church services every week. Young people are the Church of today and even leaders of today. I am so very thankful for Zach’s leadership as he planned an event that was uniquely Wesleyan, from thoughtful framing of the Freedom Center in the context of our Wesleyan involvement in the Underground Railroad, to Spirit-filled sessions to the diverse lineup of speakers and worship leaders. God’s favor was evident.”

“This Follow Conference was unique for us — Jan and I had our two middle school grandkids with us,” said Schmidt. “They were captivated by the music, messages and most of all, by the expressive and engaged worship of thousands in their generation. God’s Spirit moved and students responded in obedience!”

The next Follow will be in held in 2023 in Cincinnati, Ohio. Online resources from Follow 2019 will be available in the weeks to come. Please check followconference.org and wes.life/follow for those resources.