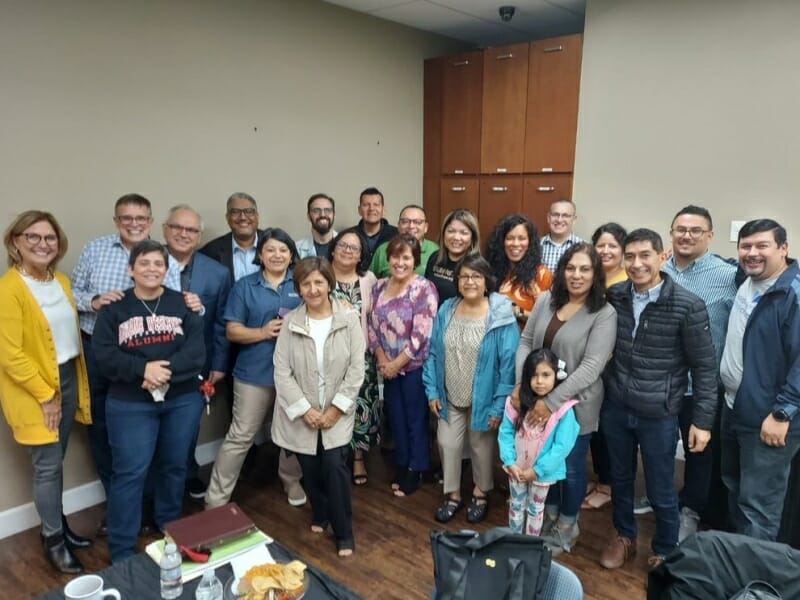 Wesleyan Hispanic pastors in the US understand the complexities of leading multicultural churches.

Raising up Hispanic leaders and helping Hispanic churches flourish is essential for Unleashing a Kingdom Force throughout The Wesleyan Church (TWC).

The Hispanic population in America is now the largest minority and has been for several years. According to U.S. Census Bureau 2020 statistics, there are 62 million Hispanics or Latinos in the United States. TWC wants to reach those 62 million.

But, as is common in Kingdom expansion, the process is not simple.

Hispanic churches are comprised of many cultures. Asking a Cuban in Miami on the fifth of May that person’s plans to celebrate Cinco de Mayo may very well result in an eye roll and the question, “Why don’t you ask a Mexican?”

Many countries and cultural differences make up the population referred to collectively as Hispanic and Latino.

Rev. Johanna Rugh, TWC associate director of Spanish Ministry Education and Formation, explains, “It is quite different to pastor in the U.S. than it is in Colombia for example. Or if you are from El Salvador, it is not like you will only have a whole church of Salvadorians. It’s really more like preparing our people to be a missionary.”

Rev. Edinson Camacho, who pastors the Nuevo Pacto Hispanic ministry at United Wesleyan in Easley, South Carolina, agrees. “The Hispanic church is essentially multicultural and migrant. Each member has his or her own story of how they entered the United States. They bring with them their models of life, customs, national symbols, expectations, desire to work and above all, an intrinsic need for Jesus Christ,” he said.

Rev. Camacho is one of approximately 20 Hispanic and TWC executive leaders who attended a Wesleyan Exponential Español roundtable on October 8 in San Diego. Exponential is a conference focused on multiplication and disciple-making; and TWC wanted to gather to better understand the realities that our Hispanic churches are facing today.

According to Rev. Camacho, “The partnership with other Hispanic leaders of The Wesleyan Church in San Diego established a clear principle of unity. In the first meeting, in an atmosphere of prayer and praise, we identified the strengths, opportunities, weaknesses and threats facing the Hispanic church in the United States in the context of the 21st century and the pandemic. On a personal level, the experience with other Hispanic leaders enriched my vision and inspired me ministerially … knowing that there are other kingdom collaborators with the same mission of planting churches around the country.”

From a practical standpoint, the group identified that what it lacks most is a place to worship. Rev. Camacho believes this is one area in which the North American church can extend the kingdom of God. United Wesleyan has done so by giving its main sanctuary to Nuevo Pacto on Sundays while relocating its second service next door in a fellowship hall.

Rev. Ingrid Martinez, pastor of Casa Sobre la Roca, Red de Iglesias in Columbus, Ohio, also attended the roundtable and said, “We are thankful for our previous experience in Exponential, which affirmed our desire to continue planting churches, in addition to intentionally work on training pastors who continue to extend the kingdom of God.”

Rev. Martinez moved with her parents from Colombia to the U.S. in search of a better life. “We suffered the challenges of immigrants, among others, the language barrier.”  Rev. Martinez studied at Wesley Seminary and became ordained in 2012. She served as an assistant pastor for several years, helping to mentor other pastors and leaders in the church and through FLAMA courses until God presented her and her husband, also an ordained minister, with the opportunity to plant a church.

Their church took root during the pandemic, and they met the only way they could, via Zoom, on Wednesdays and Sundays. The online church grew little by little to 50 people until it finally was able to meet in person once a month and hold baptisms.

“God had been showing us the way, and in December 2020, we officially presented our church project to the Greater Ohio District, who absolutely supported us. They embraced and mentored us through this time,” said Rev. Martinez.

And now, one year later, Casa Sobre la Roca, Red de Iglesias, has more than 90 people who meet in a network of four house churches that connect through Zoom on Wednesdays and meet physically on Sundays.

Taking a step when God tells you to take it, perhaps before every “i” is dotted and “t” is crossed, is exactly what many church planters are trying to do.

According to Rev. Rugh, TWC has church planters who cannot wait four years for the money and resources to be in place. “They just start meeting in living rooms and grow. We need to take that drive and desire and channel it with the proper tools and prepare them for the next step.”

One of those steps of obedience may be as simple as sharing the gospel where you live or work, something often referred to now as being a marketplace multiplier. “The marketplace multipliers we have don’t know the potential they really have. Our desire is for them to go beyond sharing and develop a discipleship group,” says Rev. Rugh. “We need to just give them the blessing and send them!”

For the Hispanic community, the denomination has laid a necessary foundation for evangelism through events such as the roundtable in San Diego, ongoing FLAMA ministry courses, and support at the district and General Church level.

Rev. Camacho summed it up this way, “Even if the foundations are laid, new columns, beams and bricks must be built that allow the denomination to be more aware of multiculturalism in society, especially at this time when Hispanic migration rates are increasing in North America. The relationship between the denomination and multicultural leaders must be regularly nurtured through bridges of communication and holistic support for Christian ministry.”

Rev. Rugh points out that many immigrants arrive with an idea of the American dream. It isn’t until they get here that they realize God sent them here for an even better dream, a higher purpose.

Wesleyan Hispanic leaders, through their prayer, persistence and creativity, are Unleashing a Kingdom Force in their communities. They, in a variety of locations and means, are closing the Gospel Gap by helping people of all nationalities and cultures realize and respond to their intrinsic need for Jesus Christ.