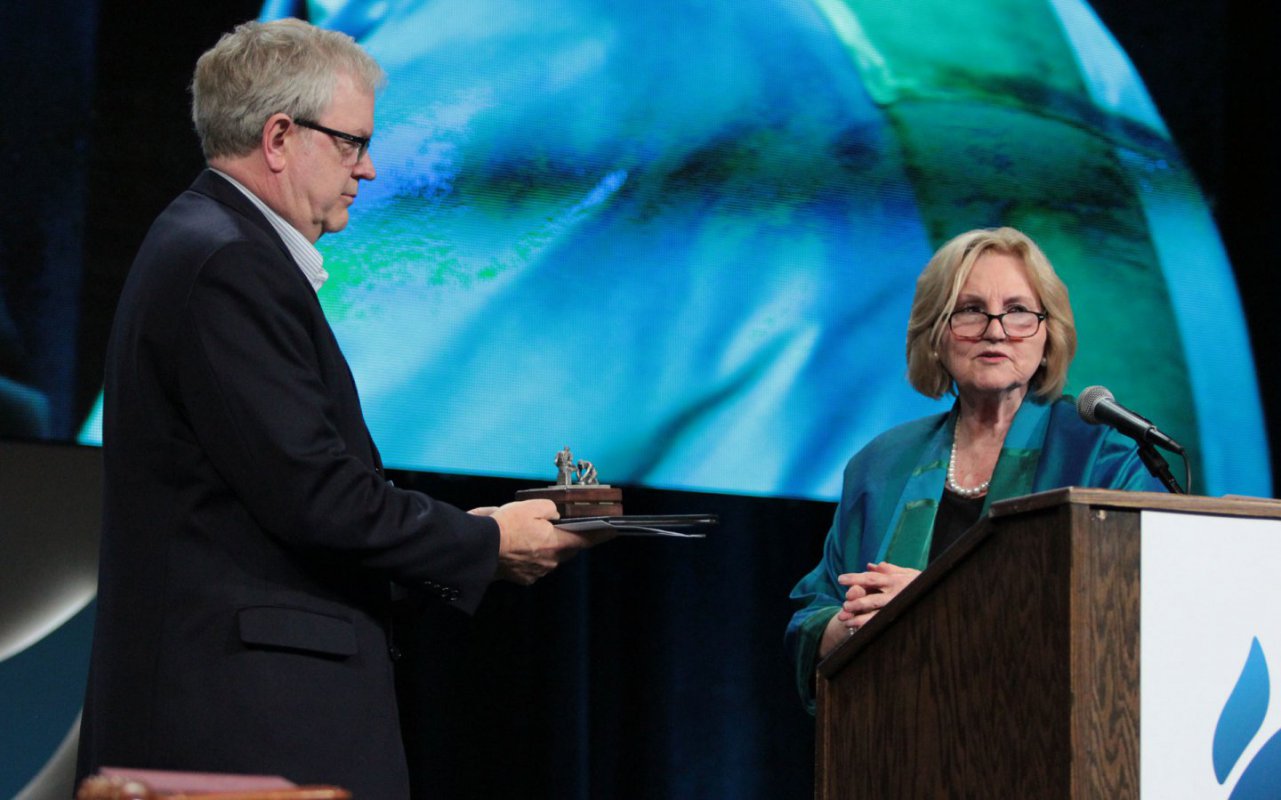 While Wayne MacBeth works with systems and structure with great detail, he also loves people, and doesn't lose sight of the fact that each person he works with is made in the image of God.

On Tuesday evening, June 7, at General Conference, Dr. Jo Anne Lyon read a citation of appreciation for the service of Rev. Wayne MacBeth as a general officer for the past four years. His leadership over communications, publishing, information technology, and the office of General Secretary has been remarkable.

The citation in full follows:

Rev. Wayne MacBeth was elected into the office of Executive Director of Communication and Administration in June 2012 at the General Conference of The Wesleyan Church.

MacBeth came to this post of denominational service with a vast amount of experience in education, local church ministry, international missions, relief and community development, fundraising, and non-profit leadership. His administrative gifts and insights made him a uniquely suited leader for a key time of transition in The Wesleyan Church. MacBeth engaged his areas of leadership with a service-mindset, collaborative-posture, and problem-solving skills.

From the outset it became clear that Communications and Administration, under MacBeth’s leadership, would seek to serve the local church, districts, and the rest of Wesleyan Headquarters with faithful diligence. This mindset manifested itself in a variety of initiatives to provide higher quality service and assistance to all levels of Wesleyan ministry, with equal passion and drive.

The posture of his leadership, and those under his supervision, included an intentional focus on collaboration. As an eminently open-door leader, MacBeth sought the input on how things were working before, during, and after any event, project, or process. He worked long and hard to bring people together to collaborate for greater effectiveness.

The work of the Communication and Administration Division is complex and ever changing in its dynamics, and MacBeth found a way to solve problems in each and every zone of his responsibility.

By empowering leadership under him, and harnessing the skills of those in the building and outside of it, MacBeth was able to make significant progress solving problems in areas of great diversity. Few people could keep their focus on so many different areas at once, along with an attention to administrative detail.

All of this MacBeth was able to do without losing sight of the people involved. While MacBeth works with systems and structure with great detail, he also loves people, and doesn’t lose sight of the fact that each person he works with is made in the image of God. He lifted people’s hearts up, and encouraged those whom others might forget.

On behalf of his colleagues in the Executive Cabinet, team members throughout Wesleyan Headquarters, the General Board, and this entire General Conference of The Wesleyan Church, we express our gratitude for the crucial leadership Rev. Wayne MacBeth provided to the Church he loves and has served, when needed, in whatever capacity needed at the time. You, Wayne, are a true servant of Christ and we admire not only what you have done, but also who you are in the midst of such service.