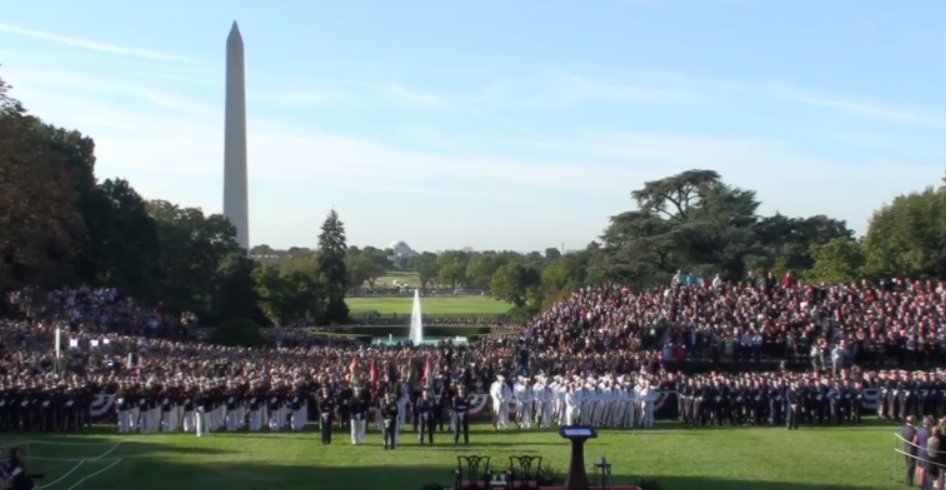 It was an honor to be an invited guest to welcome Pope Francis to our country. I’ve had some time to reflect on this experience...

This morning I joined other Americans to welcome Pope Francis to our country on the White House lawn. It was an honor to be an invited guest by the White House and I’ve had some time to reflect on this experience and pass on my thoughts to you.

I was encouraged to hear the President in his introduction state that “Pope Francis is a living example of the teachings of Jesus.” My heart is warmed to think that we can still hear the name of our Lord and Savior Jesus Christ referenced by our leaders in this country. I call on us all to live as examples of the teachings of Jesus, and even more, to surrender our lives to him so that we might have the power of Jesus Christ transform our lives.

While Pope Francis noted several issues facing our world today each one referenced was brought back to scripture and the call of Jesus to us as his followers. While each of these issues has political implications, it was a good reminder that our motivation in these matters is not political or partisan; they are instead motivated by the call of Christ on our lives.

Perhaps a symbol of that is Pope Francis. After being so formally greeted at the White House, he is now traveling to have lunch with the homeless at a shelter in downtown Washington DC. I find it quite Christlike to move from the most powerful home in the world to dine with those with no home at all.

Having worked in DC, going to Capitol Hill often, and having meetings in the White House many times I felt this time was different. I enjoy how Pope Francis is coming onto the scene, filling the air with “God talk.” It seems to me that people are hungry to hear more. Truly, there is a hunger in each human heart to hear more of the God they do not see, but long to connect with.

The Wesleyan Church and the Roman Catholic Church differ in our doctrine but we worship the same Jesus Christ, our Lord. I was particularly encouraged to hear the specific things that Pope Francis highlighted in his speech:

He said, “As the son of an immigrant family, I am happy to be a guest in this country, which was largely built by such families.” As Wesleyans we have a view of immigration that motivates us to reach out to serve and empower the immigrants around us, and within our churches. I continue to be overwhelmed with compassion for those who are hurt most by our broken immigration system in America.

Pope Francis also reminded us that he along with Catholic Bishops “are concerned that efforts to build a just and wisely ordered society respect their deepest concerns and their right to religious liberty. That freedom remains one of America’s most precious possessions. And, as my brothers, the United States Bishops, have reminded us, all are called to be vigilant, precisely as good citizens, to preserve and defend that freedom from everything that would threaten or compromise it.”

The Pope also spoke directly to us about protecting the environment, saying, “I find it encouraging that you are proposing an initiative for reducing air pollution.” He went on to note that this “is a problem which can no longer be left to a future generation.”

Our Wesleyan view on creation care echoes at least the motivation Pope Francis referenced, saying that our efforts to care for creation “…will help ensure the protection and health of future generations, will be a blessing to peoples all around the world, especially the poor, will improve our witness to a watching world, and most of all, will express our love and worship for our Creator…”

Wesleyans are also seeking to alleviate poverty while protecting the environment. The church has a critical role to play in emergency response areas that are so very impoverished as I wrote about yesterday in the Huffington Post. We can do this work while empowering care for the earth while we alleviate the suffering of our fellow brothers and sisters in need.

It has been a busy week with the Pope’s visit in the middle of it. I had the privilege along with many Wesleyans to be part of the New Room Conference in Franklin, TN who are forming a pan-Wesleyan network of like-minded Christians. I’m encouraged by this new work and was honored to speak at that event. Here in Washington DC, before the events above, I participated in a dinner at the National Press Club with around a hundred religious leaders focused on poverty and hunger. I taped a video for them about Wesleyans and the foundation on which we care for the poor and hungry.

I am now taking the train to New York City, at the invitation of the President of the World Bank for a meeting with faith leaders on how we respond to the suffering in the world.

In each of these times, where the subject of the poor and in need are talked about, I take the chance to mention that we Wesleyans are motivated to do this work because we are not satisfied with only seeing lives and churches transformed. We are not to hide out in holy huddles on the outskirts of society. Instead, we go to the marginalized and find Christ there with them already, encouraging our efforts to serve the least of these. As we do this we find that communities can be transformed and made new by the work of Jesus.