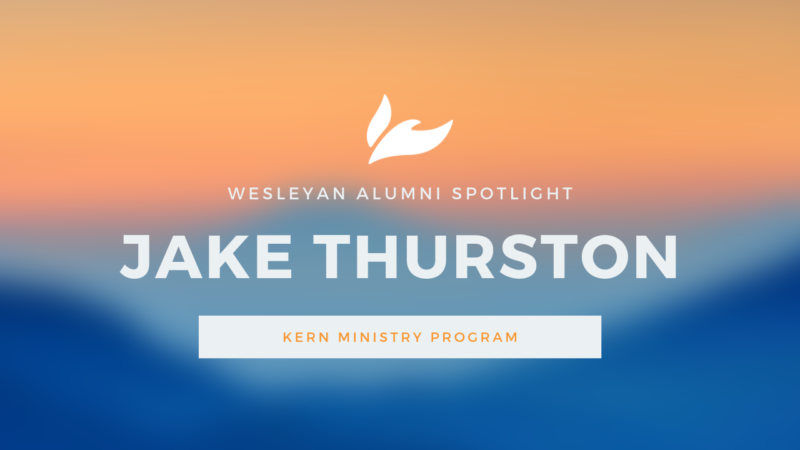 “If not for the Kern Program, I wouldn’t be at Ransom. I would have never explored the topic of spiritual friendship that has led me to be in Wesley Seminary's program — all to steward this vision that the Lord has really laid on my heart.”

Americans are ranked as the loneliest people in the world. National surveys show the United States is in a loneliness epidemic. Despite being more connected through the internet, cell phones and social networking, loneliness is a real problem that can foster tendencies toward suicide and depression.

Assistant Downtown Campus Pastor Jake Thurston of The Ransom Church in Sioux Falls, South Dakota, hopes to see the church remedy the loneliness epidemic through “spiritual friendship.” Thurston, a graduate of Indiana Wesleyan University’s Kern Ministry Program, first caught a glimpse of this vision in his first semester working on his master’s degree.

In one of his classes, Thurston was required to pick a topic for a project that would be a useful tool in future ministry. Thurston knew he wanted to learn more about how to adequately minister to the LGBTQ community. While he was doing research for the project, he was introduced to the book “Spiritual Friendship” by Wesley Hill.

“I had never heard of friendship being described so majestically and beautifully. It was such a theologically rich articulation of it that I fell in love,” Thurston shared. “Hill’s dream is for churches to rediscover what spiritual friendship looks like for their congregations.”

Spiritual friendship is the idea of the church realizing that one of its most powerful tools for reaching people is to capitalize on the inner nature of their friendships. Spiritual friendship calls individuals to revamp their interactions with people to see the Holy Spirit work to radically change relationships.

“I took it upon myself to figure out how to make his vision a reality,” Thurston said. “I want to recapture this deep articulation of spiritual friendship that has eluded us for almost 1,000 years.”

Thurston began his ministry at The Ransom Church as a resident pastor connected with the Kern Ministry Program. After his residency, he was hired as the connections pastor before filling his current position as assistant downtown campus pastor. As a part of his role, he oversees spiritual formation programs for their congregation.

The Lord’s timing is evident in the trajectory of Thurston’s ministry. His role at Ransom captures his giftings and allows him to teach others about the idea of spiritual friendship. He has had the opportunity to teach classes about spiritual friendship and see others in his congregation identify how God is forming people through their own friendships.

Currently, Thurston is working on his doctorate of ministry (D.Min.) in spiritual formation at Wesley Seminary. His education there fuels his ministry at Ransom and helps him gain more wisdom on how to help the churches to which he belongs cultivate spiritual friendships.

“I have always been passionate about spiritual formation. I have always loved seeing people be formed into God’s image to become all God designed them to be as a Christian.” Thurston said, adding:

“If not for the Kern Program, I wouldn’t be at Ransom. I would have never explored the topic of spiritual friendship that has led me to be in Wesley Seminary’s program — all to steward this vision that the Lord has really laid on my heart.”