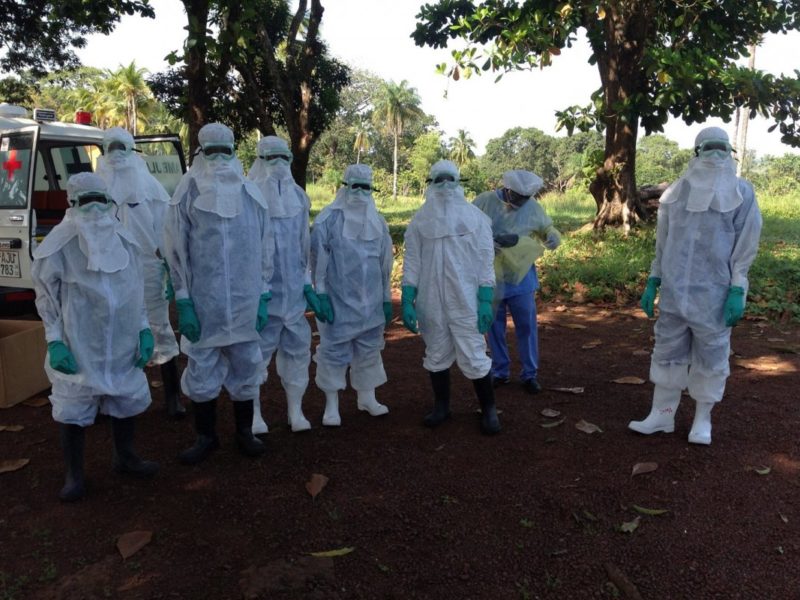 [World Hope International is the key partner of The Wesleyan Church in doing battle against the Ebola virus in Sierra Leone.]

The World Health Organization (WHO) reported on October 31 that a total of 13,567 confirmed, probable, and suspected cases of Ebola virus disease (EVD) have been reported up to the end of 29 October. There have been 4,951 reported deaths. A substantial proportion of infections occur outside the context of Ebola treatment and care.

Because of your support and the support of the Wesleyan Emergency Relief Fund, we have been able to fight a good fight this week against the deadly Ebola virus, including:

WHI performed water rehabilitation work at the Arab Hospital Ebola Holding Center. The water system at this hospital was sorely in need of repair. WHI engineers repaired the pipes and provided a new water tank. Now the hospital has clean water to help in containing Ebola. Our wells team is currently working on rehabilitating a water well at the government hospital in Makeni.

Last week we reported that one of the homes in Bombali Bana, that is part of the ongoing WHI pineapple agricultural program, was quarantined due to an Ebola death of one of the household members. There is now a second home that has been quarantined. Food support to this Bombali Bana village now includes both quarantined homes. Thank you, Central Wesleyan Church, in Holland, Michigan, for making it possible to provide food to members of these two homes, which are currently under armed guard by the Sierra Leone military.

Community sensitization using a mobile PA system in all the Ebola “hot spot” chiefdoms & villages. Radio program broadcasts on all radio stations funded by WHI and UNICEF that provide panel discussion on key emerging issues fuelling the spread of the Ebola disease. Topics discussed include cultural burial, migration of the sick, quarantined homes, and survivors’ stigmatization. During these broadcasts the panel took phone calls and text messages from listeners and provided answers and key information on Ebola.

Join us in a call for prayer with The Wesleyan Church this Sunday, asking God to:

Have mercy on the people of West Africa by eradicating this horrible epidemic that is taking so many lives. Pray for the courage and safety of healthcare workers that are currently treating patients with Ebola. Pray that international staff support will soon come in full force to support current medical teams fighting Ebola. Pray for WHI staff, that they remain safe supporting the people of Sierra Leone.

We cannot engage this battle without the continued support of our donors and the Wesleyan Emergency Relief Fund. Thank you for any gift of support!