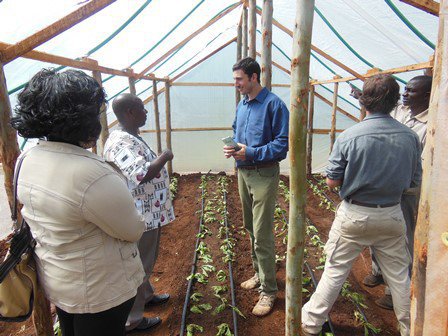 World Hope International (WHI), in partnership with Penn State’s Humanitarian Engineering and Social Entrepreneurship Program (PSU-HESE), today announced that its Greenhouses Revolutionizing Output Project (GRO) has been named an award nominee in the Securing Water for Food Grand Challenge for Development. Founded by the United States Agency for International Development (USAID), the Swedish International Development Cooperation Agency (Sida), and the Ministry of Foreign Affairs of the Kingdom of the Netherlands, the Securing Water for Food program aims to identify and accelerate innovative technologies and market-driven approaches that improve water sustainability ultimately helping to boost food security and alleviate poverty.

“Water scarcity and its impact on food security is one of the most pressing development challenges of the early 21st Century,” said Khanjan Mehta, director for the PSU-HESE Program. “As partners with World Hope International on the GRO Greenhouses joint venture, we know this has the potential to transform livelihoods, health, and food security for farmers currently living on less than $2 a day. We’re honored to receive this award and look forward to using the funds and recognition associated with it to mobilize the project and bring it to scale in the most poverty-stricken countries in the world.”

In lieu of water supply becoming more limited, there is an urgent need to conserve and make use of every drop of water to foster food security. The GRO Greenhouses project will invest in “Affordable Greenhouses,” a new greenhouse concept designed, developed and field-tested by PSU-HESE. Studies by the university have shown that greenhouses effectively reduce evapotranspiration by 30 percent when compared to open-field conditions, and the water use per unit yield can be lowered by up to 61 percent through the usage of a controlled irrigation system inside the greenhouse. Furthermore, the growing season under greenhouse and drip irrigation can be extended from 6 to 12 months, increasing crop yields up to 300 percent, compared to crops grown in an open field without drip irrigation. Greenhouses also allow farmers to extend their growing seasons so they can grow produce to markets when prices for produce are higher.

However, conventional small-scale greenhouses are expensive, high-maintenance and difficult to construct. Affordable Greenhouses cost under $500 per unit, and can be constructed in just two days by two trained technicians. Additionally, the Greenhouses last over 5 years on average and are portable and expandable, enabling farmers to increase capacity as their profits rise. These structures are proven to be more affordable, durable and scalable than traditional greenhouses used around the world.

The GRO Greenhouses project specifically targets women farmers in Sierra Leone and Mozambique, where over 70 percent of the work force is engaged in small scale agriculture or agricultural trading.

Through WHI’s existing network in these two countries, smallholder farmers will learn how to intensify their farms and grow vegetables year-round so as to augment their livelihoods and stem urban migration. There will also be a particular emphasis on nutrition for pregnant women and new mothers.

“Many people in these countries live traditional lifestyles in remote areas, far removed from the technology, commerce, water supply and infrastructure of modern cities. By utilizing our existing network of Village Partnerships, we’re able to reach smallholder farmers in these rural areas and train and empower them to transition their subsistence crops into commercial scale farming using the new technology of Affordable Greenhouses,” said John Lyon, World Hope International’s President. “We’re proud to partner with PSU-HESE on the distribution and execution of this innovative greenhouse concept, which we hope will combat hunger, provide food security and promote income generation in rural Sierra Leone and Mozambique.”

Learn more about the Securing Water for Food program and World Hope International.