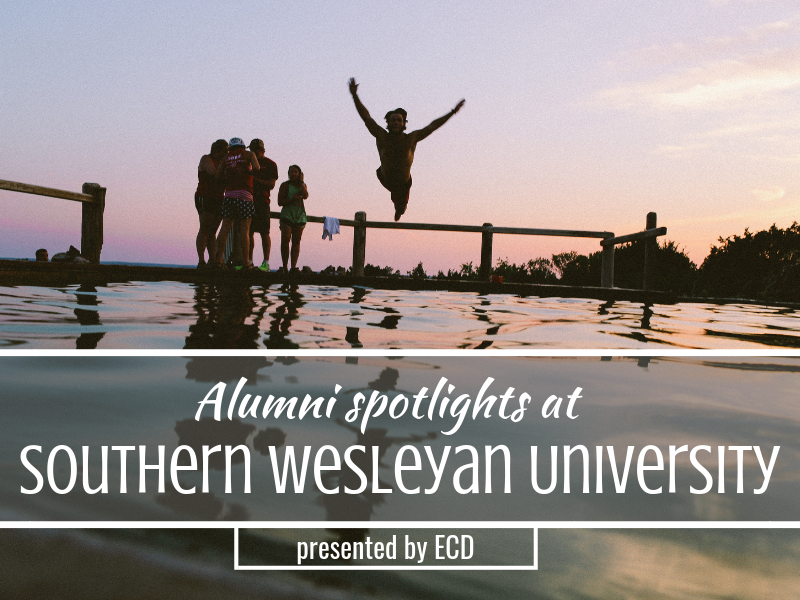 A university of mentors: Southern Wesleyan in the eyes of Grant Wood

“SWU gave me the foundation I needed to be where I am today,” he said.

When I asked Wood, who is now working as a resident pastor, what he thinks his peers remember him for most, he said: a sense of humor.

“I’m the one who would usually get the ball rolling with having fun and laughing,” he said.

Wood didn’t expect to stay at SWU but he’s happy he did, he told me as he sat beside his wife, a fellow SWU alumnus, on the couch in their home.

Wood’s life was somewhat of a college tour, with parents who coached at Indiana Wesleyan (IWU) and Oklahoma Wesleyan before settling in Greenville, North Carolina, where his mother worked at the headquarters of the National Christian College Athletic Association (NCCAA).

Wood’s first semester was spent at North Greenville University, but when that didn’t seem like a good fit, he transferred to SWU. However, commuting to a small university in his backyard wasn’t what he had in mind, and he was set on transferring to IWU.

But, as Wood said, “God had other plans.”

Wood had slacked off through his semester at North Greenville, failing a class and settling for D’s in the others. Coming to SWU, he was poised to lose his state scholarship and felt a burden not to disappoint the people who had known him and his family for years.

“Luckily a lot of people there knew me, and knew I was smart and driven when I wanted to be. I knew I was going to have to show them that I was committed,” he recalled.

SWU didn’t have a worship ministry major when Wood arrived in the winter of his freshman year. His adviser, Mari Gonlag, quickly corrected this, pulling together a curriculum just for Wood.

Bob Kerstetter, the chapel director of worship who became Wood’s mentor, told him about an opening for an electric guitarist on the chapel band. Wood made it through auditions and spent the next six semesters growing in leadership and an understanding of the meaning of worship under Kerstetter’s guidance.

“There were so many mentors at Southern Wesleyan,” Wood said. “At SWU, the No. 1 goal was student health. No. 2 was education.”

Wood said Kerstetter and professor Robert Black were “guiding voices” in teaching him the principles and significance of worship.

In Black’s introductory course, the Foundations of Worship, Wood read “The Wonder of Worship: Why We Worship the Way We Do” by Keith Drury. The book was the best he read in three and a half years at SWU, broadening his understanding of worship by explaining its meaning and history.

“I took a lot more in-depth courses during my time at SWU, but that course was so practical. As a young worship leader, it changed how I was leading and the intention behind my worship,” Wood said.

Wood’s mentors at SWU saw him grow in leadership and stewardship of his gift.

“Grant is gifted with music so beautifully, and yet he’s humble. To combine such giftedness with humility is such a significant trait,” Wilson said.

Perhaps the sweetest legacy Wood took from his time at SWU was a wife. Wood’s future wife Chelsey was studying early childhood education but felt a call to worship ministry her junior year and naturally began studying with Wood, who was the only other worship ministry student on campus.

The two fell in love over their studies. Together, they signed up for SWU summer ministry teams and co-led a worship band that traveled to youth camps across the country for eight weeks.

Wood and Chelsey married during the summer after graduation, and the six friends who were on that summer team attended the wedding.

Wood is now a resident pastor at Alive Wesleyan Church in Central, South Carolina. He also helps as a youth director at the church’s satellite campus.

“SWU gave me the foundation I needed to be where I am today,” he said.