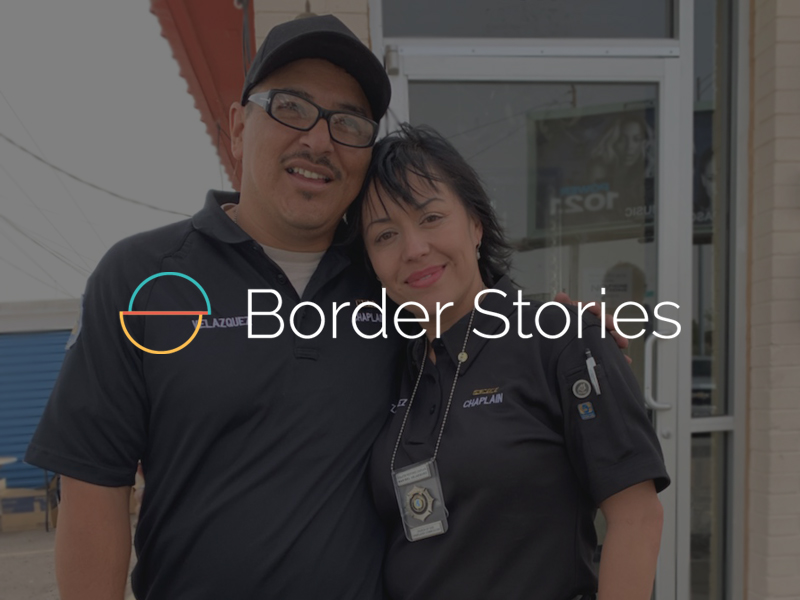 Border Stories: When I was hungry, you fed me

Pastor Maribel and the team at El Elyon Church just can't stop when it comes to welcoming the immigrants who continue to arrive by bus in their community.

Our team pulls in to the gated parking lot of what looks like a repurposed restaurant: flat red roof, stucco walls, absent sign. In the distance, the Franklin Mountain Range creases the middle of El Paso, separating east and west. We are on the eastern side, and the land is hot and dry, the sky Ceylon blue.

Sami, our guide for this border encounter, tells us to wait in the parking lot while he disappears behind a single glass door. A few minutes later he appears again, accompanied by a striking woman. She is petite, with straight black hair, and a warm, husky voice. Her smile exudes generosity. Exhaustion, however, is writ large across her body. Her eyes betray a weariness and easy tears. She wears a lanyard with a badge. It reads, “Disaster Response Chaplain, Maribel Velazquez.” 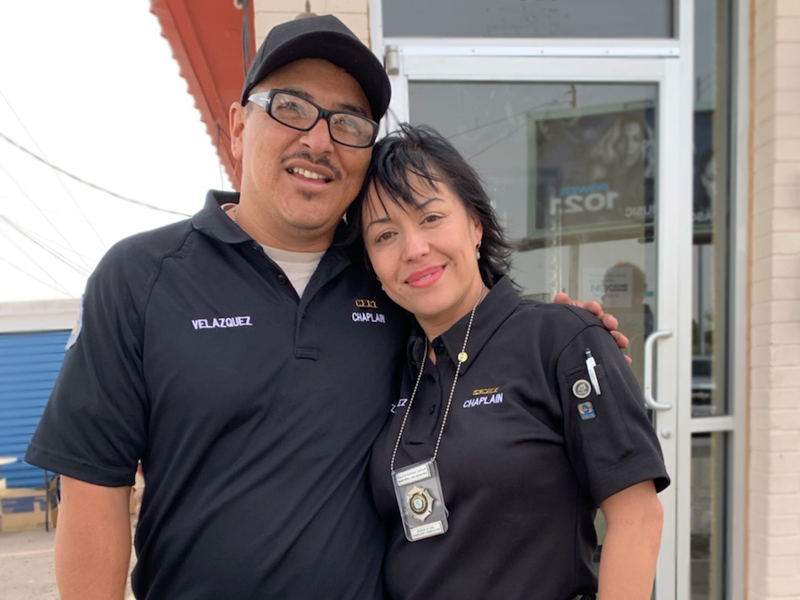 Born in Juarez and raised in Los Angeles, Maribel came to the desert to pastor a little church located on the border of El Paso called El Elyon — a Hebrew word for “God Most High.” El Elyon is part of the Church of God (Cleveland).

Pastor Maribel takes us inside their modest church where she, her husband, Osvaldo, and faithful team of congregants have been receiving 40 – 60 migrant families every single day since the beginning of March.

To meet the task, they have converted their neatly square sanctuary into a bedroom lined with dozens of green army cots. The platform of the sanctuary (where Maribel would normally deliver her Sunday sermons) has been transformed into a check-in station. Folding tables stand with basic hygiene supplies like band aids, hand sanitizer, antacids, cough medicine and Gatorade. Beside it, two or three people field questions and decipher paperwork.

Osvaldo opens a narrow white door on the opposite side of the room, ushering us into the makeshift dining room. More team members dole out heaps of warm rice and frijoles, while the group of new arrivals waits quietly, patiently, along the wall.

Tucked around the corner, in a space no bigger than a closet, is the kitchen with a single refrigerator and a burnt-out stove. The stove broke down shortly after El Elyon started hosting the newly arrived migrants. “We’ve worked miracles with that stove,” Pastor Maribel says. Since then, they’ve been cooking the food offsite and bringing it in in large piping hot, aluminum dishes. 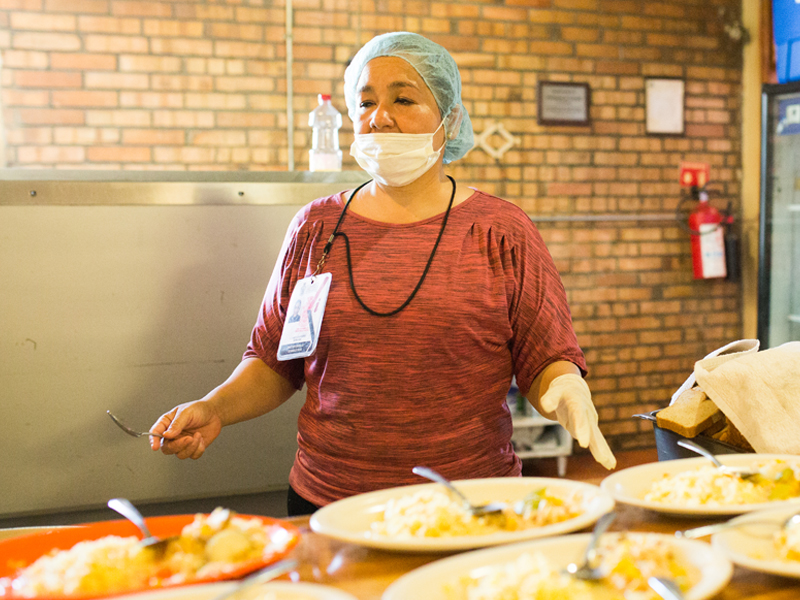 Maribel introduces us to the families clustered around the room. She asks the group where they’re from — Honduras, Guatemala and El Salvador. Hands raise, hailing the homes they have left behind.

“They are wonderful people,” she tells us. “Really wonderful. They will open their hearts to you.” She turns back to the group. “Ellas son las pastoras (they are the pastors),” she introduces. “They’ve come to hear your stories and to help you. Whatever you need, let them know.”

And almost before she can finish speaking, the dam of hesitation breaks. The kids stream forward, wrapping their arms around our legs, their mamas and papas nod and smile shyly from behind.

I think the most profound aspect of Pastor Maribel’s ministry at El Elyon is the humanizing affect her ministry is having on the migrants. “You’re going to see the process,” she tells us, “how they’re going to change from when they get off the bus to when they leave us. Some of them don’t want to leave. They come back and say they want to stay with us, but they have to go. Here they are being treated as humans, children of God, and that’s something that motivates me to continue.”

These refugees arrive at El Elyon having been extorted, abused and terrorized by the coyotes (smugglers) and cartels all along their migration to the border. Then when they get to the border, there is massive culture shock. The sheer machination of a system that is ill-equipped to handle such numbers makes them feel dehumanized in ways that seem to break their spirits.

“When they come here, they’re running fevers with a cold and very, very sick from their stomach,” Pastor Maribel explains.

As we begin to mingle and talk with the families, their experiences at the border pour out in vignettes, snapshots, that we struggle to make sense of.

They tell us that the holding facility was so, so cold. They call it, “the ice house” or “the freezer.”

They tell us that the agents took their sweaters and jackets away and gave them only a single nylon blanket.

They tell us they had to drink water from the toilet.

They tell us they were given only a single juice box, a frozen sandwich and maybe a burrito to eat. That the food made them sick.

Later, when we are able to meet with Taylor, a worker with Immigration Legal Services, we get a clearer picture of what actually happens in the holding facilities.

These families have never experienced central air before. Their sweaters, belts and shoelaces are removed because these items are strangulation hazards. So, when they are left to sleep on a concrete floor, without their outer layers, in iced air, they suffer. 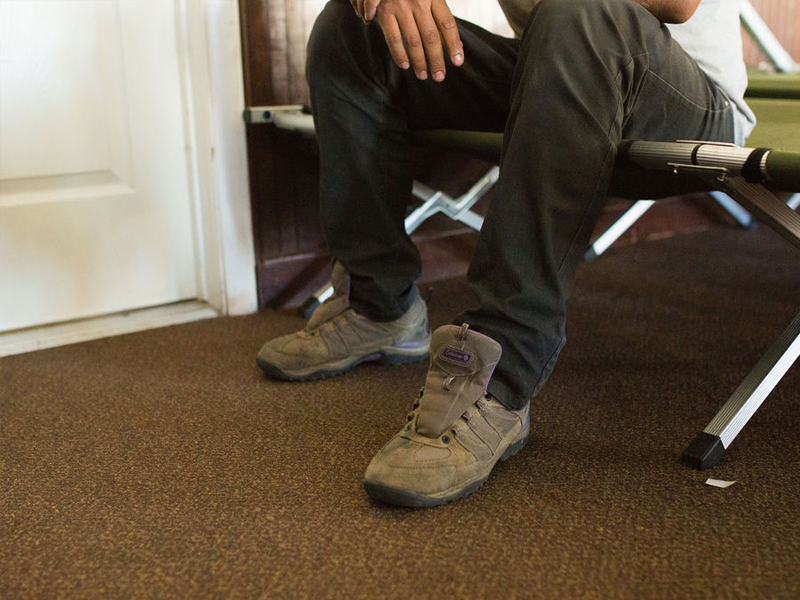 They are not drinking water from the toilet. They are drinking from a water fountain above or near the toilet. However, these families are unfamiliar with the luxury of potable water. For them, drinking water comes in bottles. So, when they are left to drink from the fountain, they believe they are drinking toilet water. Not to mention, the water in El Paso tastes bad. (This is a fact our team can verify!)

The families are given meager food in the holding facilities; however, they aren’t used to our North American processed food, and it’s hard on their stomachs. Hence, many end up throwing up and getting sick.

Though the care at the holding facilities may not intentionally be mean or punitive, these facilities are, unfortunately, ill-equipped to handle the massive numbers of families passing through due to this immigration crisis. The effect is dehumanizing.

When the families shuffle off the bus at El Elyon fresh from their time at the facilities, they are weary, dirty, sick. The smell in the sanctuary is pungent, but quickly dissipates as one by one the fathers, mothers and children take showers, perhaps for the first time in weeks.

Pastor Maribel and her team have set up a makeshift shower stall on the patio behind their building.

“They tell me I can’t build this, that it’s illegal, but … ” Pastor Maribel stops and shrugs. “What am I going to do?” At that particular moment, a mother is showering her little boy. They are hidden behind the curtain, but I can hear his little feet slapping the wet concrete and his voice cackling with glee.

Once the families wash up, they eat, rest, get new belts, shoelaces and fresh clothes.

“It’s their stories,” she tells us. “Sometimes, I have to close myself in my office and just fall on my knees and cry out to the Lord because of what they have seen. Some of them have been raped. They’ve seen their children killed.” Tears line her already red eyes as she speaks.

More than anything, what Pastor Maribel and her team do is care for the hearts of these families. 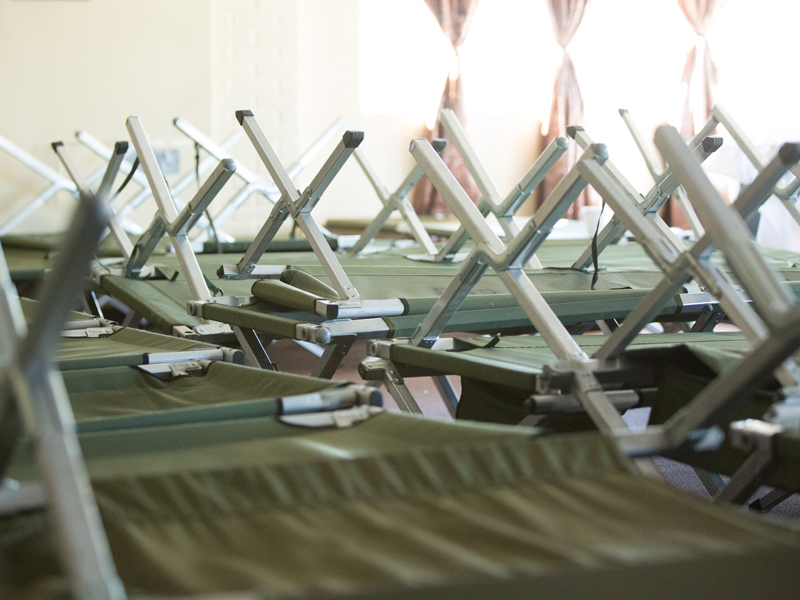 One of our team members, after seeing the sanctuary filled with cots, asks Maribel, “Where do you hold Sunday service now?”

In the dining room area, I press through the doors and encounter an impromptu prayer service happening. I can’t discern who is at the middle of the prayer circle, or what might have originated it. All I see is the group of families putting their hands on each other, circling up, singing a chorus of prayer.

It is this attention, this tender care of the soul, not just the body, that shoots this place through with light. I feel as if I am standing in a holy space, where Christians are being Jesus’ hands and feet. It’s as if I’ve been ushered in by grace and mercy, and I am overwhelmed with gratitude. By allowing our team of eight to come and visit her shelter, to witness her work, Pastor Maribel is leading us into the kingdom of heaven. 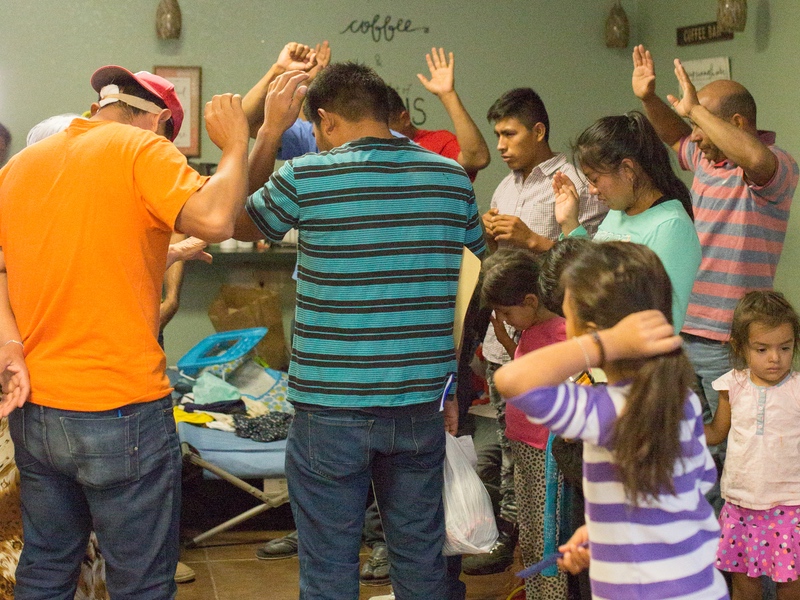 I ask Pastor Maribel why she chose to open her church to these migrants. She tells me that one morning she was lying in bed, talking to God. “I said, ‘Lord, what can I do? I think I’m not doing enough for you. Lift up my eyes to heaven.”

She turned on the TV, and there was her answer: a news report about a local church taking in asylum seekers. Pastor Maribel told Osvaldo, “Let’s contact them.”

She thought the process would take a week or two, but it was a matter of hours. Literally, the next day after she registered her church as a shelter, U.S. Border Patrol brought the first busload.

El Elyon had nothing ready yet — not cots, no medical supplies, no shower, no clothes. But they’ve had support from their denomination, and God has provided every need so far, sometimes right at the last minute.

I ask Pastor Maribel when she’ll stop, when she’ll take a break. She chuckles, “I keep asking my team, ‘You guys want to give up? You want to stop? They keep telling me ‘No, Pastor! Let’s continue. Let’s keep going for one more bus, one more bus.’”

I ask Pastor Maribel one final question, if she has a message for our pastors and our churches, those of us further away from the border, but fellow workers in the faith. She pauses, then speaks: “According to the Word of God in Matthew 25, Jesus said, ‘I was hungry and you fed me, I was thirsty and you provided the water … ’” That’s as far as she gets before she breaks into tears.

Christin Wright-Taylor is a missionary kid born and raised in The Wesleyan Church. She lives in Southern Ontario with her husband, also a missionary kid, and their two school-aged kids. She is a writer and a professor of writing. Her work has appeared in The New York Times, Washington Post, and Sojourners. She has also published two books with Wesleyan Publishing House. Currently, she is a Ph.D student at University of Waterloo, studying composition and rhetoric. You can read more about Christin and her writing at www.christintaylor.com.