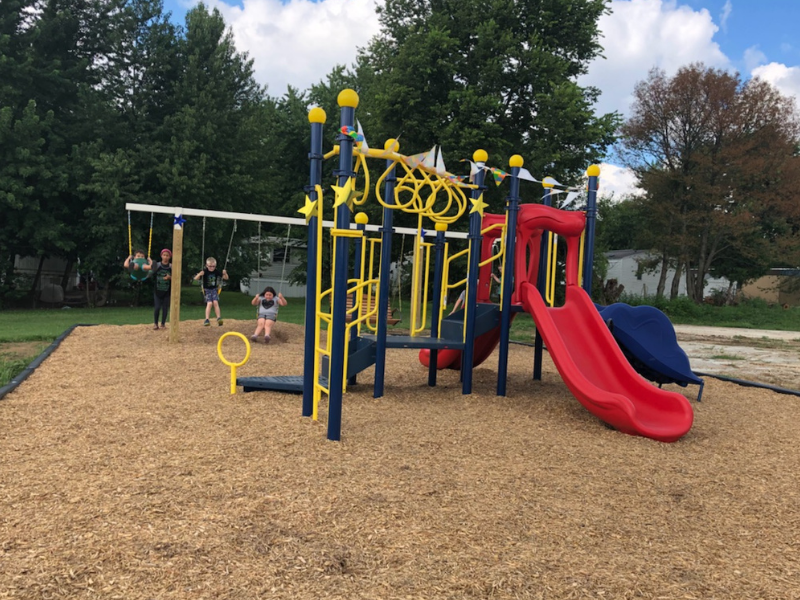 Building bridges and being a “lifeline”

Between installing a playground and providing meals, LifeLine Wesleyan Church is offering hope to families in its community.

The realities of a growing congregation and need for continued ministry outreach and expansion, paired with unavailable property to build or expand, were not lost on leaders at LifeLine Wesleyan Church in Greensburg, Indiana.

So, when Pam Loyd, assistant pastor of children, youth and family at LifeLine, approached lead pastor Doug Preston in September 2015 with her belief that the church should build a playground, children and youth ministry leaders of LifeLine began praying.

Loyd said, “[I believe] God wanted us to build a playground for children so that they had a safe environment for allowing them to grow physically and emotionally, and a bridge to the church programs by which they could grow spiritually.”

But the current property allowed no possibilities for building expansion.

“God’s plans are not limited to what we see or hear, and he is always at work to build his kingdom ‘on earth as it is in heaven,’” Loyd said.

In the following year, Preston found a property with an existing church building with six additional acres of land for sale. LifeLine was able to secure the property in a matter of weeks and officially moved in September 2017.

Loyd has dubbed this, along with several other divinely-timed miracles, “GODpportunities,” recognizing that only God could have paved the way for such an opportunity.

Following the move, the playground, a $30,000 project, was funded through support and grant money awarded from a local community foundation and was assembled by LifeLine Wesleyan congregants, Speranza and Foundations Recovery Houses, Narcotics anonymous, TLC (Transitional Living Center) and many other volunteers.

“God prepared the hearts, and when the ‘GODpportunity’ came, so did they,” Loyd said.

As God continues to provide ways to connect the church and the community, Loyd says she sees many bridges being formed:

“LifeLine has long led the way in our community for outreach and support. Through the Celebrate Recovery, Celebration Place and The Landing programs, we have reached out to help people find the healing of Jesus,” Loyd said. “Through the Back-to-School and Free Toy Give-Away, we have provided two events each year since July of 2015 to provide brand new school supplies and Christmas toys to help parents provide for the needs of their children. Each provides a bridge between church and community.”

LifeLine, through the local YMCA, served as a host site for the Summer Feeding Program, funded by a YMCA grant, “to provide food through the summer months for children in low-income families, because they would not have the school free lunch program when out of school.” When schools closed because of COVID in the spring, extra food was also available for those families.

Food was packaged at the local high school between March and July by volunteers from LifeLine and the YMCA. Because many of those families do not have vehicles or were forced to leave younger siblings with older ones while parents worked, there was no way for those in need to get the food. So, Loyd and Bill Benefiel, a volunteer from LifeLine (who has since passed away), picked up food for students to pick up at the church.

Around 30 kids arrived at LifeLine Monday through Friday this summer, hungry for lunch. They stayed at the church for worship, a Bible lesson and games and activities — including playing on the new playground — and headed home with breakfast food for the next morning. Loyd estimates that in June and July, approximately 2,800 meals were distributed.

A partnership was soon formed with Gleaners Food Bank out of nearby Indianapolis, and the church began dedicating finances to purchase food from Gleaners to serve to Greensburg residents. When school began in late summer, Gleaners began using LifeLine’s property as a mobile pantry distribution center. A decision was made recently for this distribution site to be permanent.

Loyd said, “We have consistently had children and families coming to LifeLine Wesleyan,” as a result of building bridges throughout the community. “One such family is an active part of our worship team and came initially through a flier sent home with their daughter about our church and a revival being held. This young girl attended The Good News Club, an after-school program at the local elementary school.” Loyd teaches at The Good News Club.

Loyd believes God continues to bridge gaps between LifeLine and the Greensburg community through “GODpportunities,” and she said LifeLine is committed to crossing those bridges as they seek to become a transforming presence in their ZIP code.