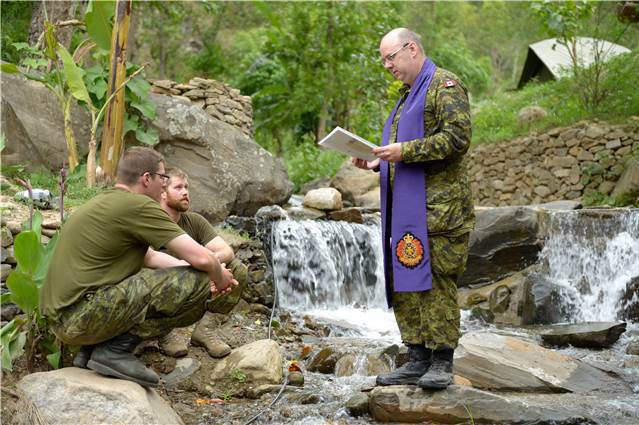 Chaplain Captain Ray Smith served one month in Nepal after the disastrous April earthquake. His service was appreciated by many, and he was rewarded with thousands of smiles and thanks.

Chaplain Captain Ray Smith has been serving with the Canadian Forces Garrison (Army) in Petawawa, Ontario, for five years. Less than a week after the deadly April 25 earthquake in Nepal, a “disaster assistance relief team” (DART) was deployed, and he was part of it. He had only twenty-four hours’ notice.

He was the only chaplain deployed on the DART team of about two hundred soldiers. They traveled on a Boeing C-17 Globemaster transport jet halfway around the world. With them, they brought heavy equipment for clearing landslides and demolished buildings, a mobile medical hospital, and a contingent of 5-man 4-wheel-drive vehicles. Pausing for only a few hours in Kathmandu, they set up a forward operations base near the mountainous epicenter of the quake several hours northwest of the capital.

For the next month, Chaplain Ray and the DART team slept in tents and made daily trips out into the devastated towns and countryside. They cleared a lot of roads, treated hundreds of injured people at their hospital location and in remote locations, distributed thousands of water filtration buckets, and provided emergency transport for civilians. Three of the soldiers spoke Nepali and Hindi, and were able to coordinate with local authorities and ministries.

It was unsettling for the Canadian DART team to be there. A second, large (7.3) earthquake happened while they were there, and though less deadly than the first, it was also frightening and destructive. There were an average of seven tremors a day. And the total devastation and death left an impression.

Chaplain Ray did his job by helping out wherever he could alongside the team, but all the while informally encouraging, counseling, answering questions, advising the command, and by praying and leading in prayer. He also conducted worship services while there.

About a month after arriving, they returned home. They provided emergency assistance for a lot of people, and were rewarded with thousands of smiles and thanks.

Chaplain Ray is a 1991 graduate of Kingswood University (formerly Bethany Bible College). He later graduated with the M.Div. from Tyndale Seminary in Toronto. He served as a Wesleyan pastor and church planter for many years until becoming a full-time military chaplain in 2010. He feels that one of his ministry strengths is family counseling, and that has served him well at the garrison at Petawawa, where over 6,500 army personnel serve. His wife, Julie, helps anchor his ministry, and he has three children: two teen-aged girls and a son in the army.