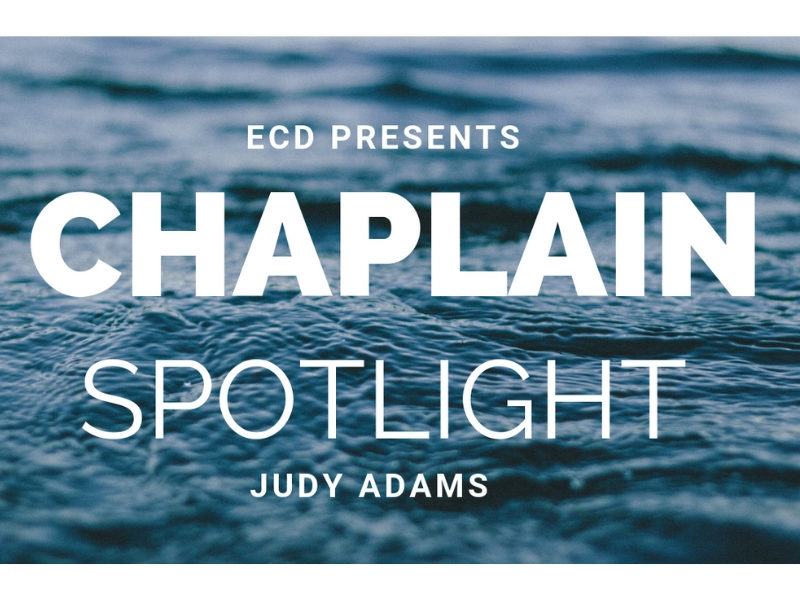 Adams reminds people outside the world of prison to avoid allowing fear to prevent them from ministering alongside people in prison.

“Church in prison is my favorite church anywhere,” said Judy Adams, a correctional institutional chaplain in Canada. Adams was a teacher at the institution for 13 years and has served as its chaplain for the past four years.

Adams’ draw toward organizing and taking part in church services in prison is due in part to the fervor of those who attend. “At every prison church I have attended, the inmates love to sing and they are much more real,” she said. “They are freer to open up about what they have done and what their needs are,” Adams reflects about ministering to people in prison.

A typical day for Adams consists of morning briefings, one-on-one meetings with ladies, special event planning, bible studies and visitations to different units. Adams’ weekly hours vary. She is able to set them based on her schedule, barring any crises with which she tries to assist.

Adams remarks how refreshing it has been to have the support of her local pastor for her efforts within the prison. In the past two years, Adams was able to take some inmates with minimum-security confinement to her local church. “It has been great for those women because it gives them hope that they can be welcomed into any church,” she said.

A few weeks ago, Adams took an inmate for communion at her local church. Adams reminded the inmate, a lifer who had earned minimum security status after several years, that because of her relationship with Christ, she was welcome at the Lord’s Table. Later in the week, Adams received a note from her pastor expressing “what a privilege it was to be able to serve her communion.” In the same note, the minister expressed how much that moment taught him about “the magnitude of God’s grace.”

While being a chaplain within a prison comes with similar challenges as pastoring any congregation, the role contains unique obstacles to engaging in the work of faith. Because of the political environment of the prison, Adams is surrounded by rules, regulations and social norms that can make sharing faith a challenge. One lesson she has learned from ministering within a religiously neutral environment has been to love faithfully and lead by example, even when both are difficult.

Because prison is a multi-faith environment, Adams makes religious services available to inmates from all faith backgrounds. Part of her job includes offering resources for different religions including Buddhism, Islam and Wicca. “I really struggled with that because I don’t want to water down my faith or compromise it,” she said. Adams discovered, however, that if she denies their request, she loses their trust and often pushes them farther away from life in God. “I continue to work and love them and very often those same people come to my chapel services. I trust the Holy Spirit to work,” she said.

Adams reminds people outside the world of prison to avoid allowing fear to prevent them from ministering alongside people in prison. While individuals in prison have made mistakes, it is essential to see their shared humanity before judging them for their errors. There is no “us” and “them,” but a shared bond under God’s grace. “We all have done things that we have sorely regretted and they are redeemable,” Adams said.

Prison ministry includes a variety of opportunities for community members to volunteer, such as offering music, leading a devotional or just being present.  Individuals in prison “love volunteers because it tells them they are not forgotten and people are giving up their time for free to let them know they are worth it,” Adams said.

For those who are interested in getting involved in prison ministry, Adams offers the following few steps to begin the journey: