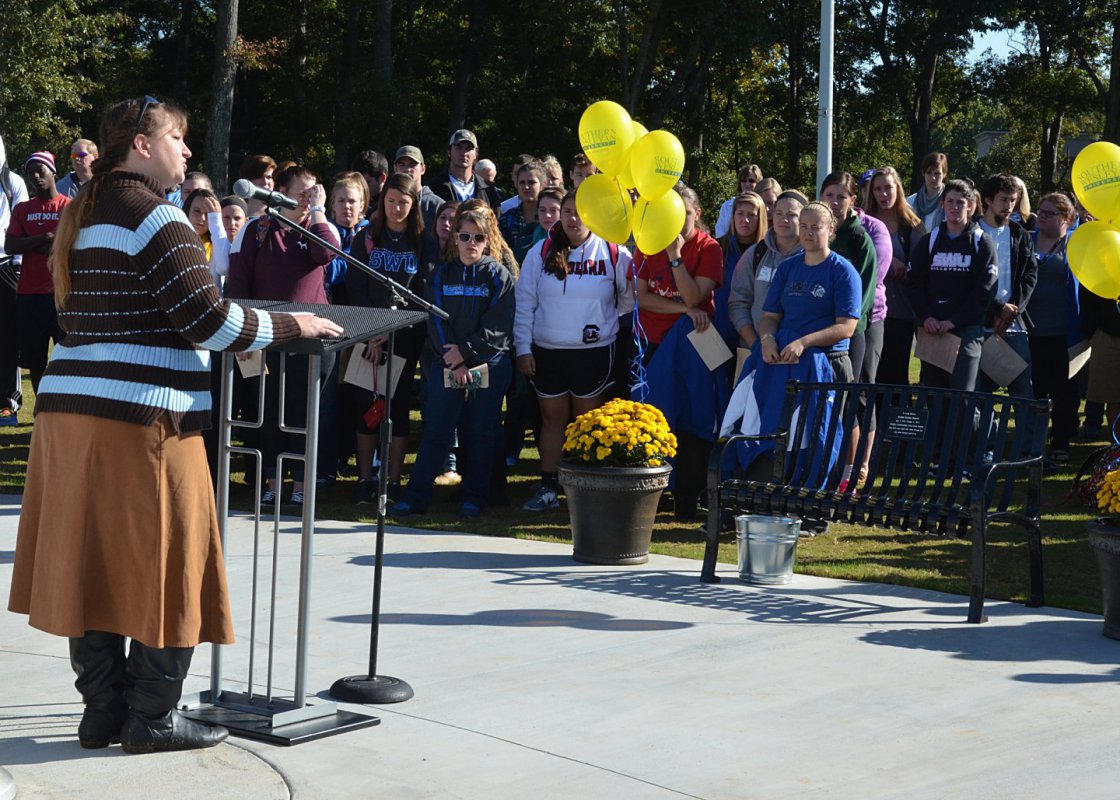 Southern Wesleyan dedicated a bench in Krystal Pearce's memory on its new flag plaza on campus. Pearce, killed in a car accident in 2013, prayed for fellow athletes at SWU to know Jesus.

Bench at flag plaza a memorial to SWU student

When Krystal Pearce entered Southern Wesleyan University as a freshman in August 2013, few could have realized the impact that she would have during the brief period of time she was a student.

On her way back to her home in Delaware for fall break, Krystal died in a tragic accident along I-85. More than a year later, Krystal’s influence continues to be felt among her classmates and teammates.

On October 20, 2014, Southern Wesleyan dedicated a bench in Krystal’s memory on its new flag plaza on its Central, S.C., campus.

“On this beautiful day, we come to celebrate the memory of a beautiful person,” said Ken Dill, university chaplain. Dill remarked that they had run out of programs as a large crowd of students, faculty, and staff gathered–a testament to the many individuals Krystal impacted within the campus community.

Students who knew Krystal shared stories of how she demonstrated Christian love and compassion toward her classmates.

Gavin Potter of Central, who is also the SWU Student Government Association president, recalled how Krystal prayed that members of the track team would grow closer to Christ and added that–though she was on the tennis team–Krystal would also work out with the track team, considering them “family.”

“To know this was a life defined by God and his Word, I think it’s truly an inspiration to us all,” Potter said. “This bench dedication is in memory of a woman who was not necessarily defined by her great deeds, but by her great God.”

“When Krystal prayed for the track team that night, I don’t think anyone knew the magnitude of the effects that it would have,” said Olivia Bush of Indian Rocks Beach, Fla., who befriended Krystal at orientation when both were new students. Bush, who runs on the university’s track team and became a Christian this past spring, recalled how Krystal drew others toward her with her “warm and bubbly” personality and how her prayers had an impact that continues.

“There once was a super perky 18-year-old girl that was absolutely terrified to go around and talk to people about how much God loves them,” said Heather Pearce, Krystal’s mother. “Can you imagine if she didn’t go out and talk to each of you?”

Heather paused to pick up some landscaping pebbles in the plaza, then continued to speak about her daughter’s life and influence.

“Our words may be a pebble in our minds,” Heather said as she held up a pebble. “We may think of this as our word–it may start out as a small stone as you throw it, but there’s a ripple effect. The ripple grows ever bigger as it goes along. In order to have this effect, we first have to have the courage to pick this up and have faith that God will use this and have a ripple effect.

A year ago my Krystal picked up a stone, and her impossible prayer she committed to God was for the track team. She prayed every day; I know this; she told me. She took courage and shared her story and love for God, and now she has a front row seat. She’s with Jesus and she’s watching this great ripple effect.”

In addition to the dedicated bench at Southern Wesleyan University, a memorial scholarship has been endowed bearing Krystal Brooke Pearce’s name. Her positive impact will ripple in perpetuity in many ways.

Pictured: Heather Pearce addresses SWU students, faculty, and staff gathered for the dedication of a bench in memory of her daughter, Krystal Pearce.