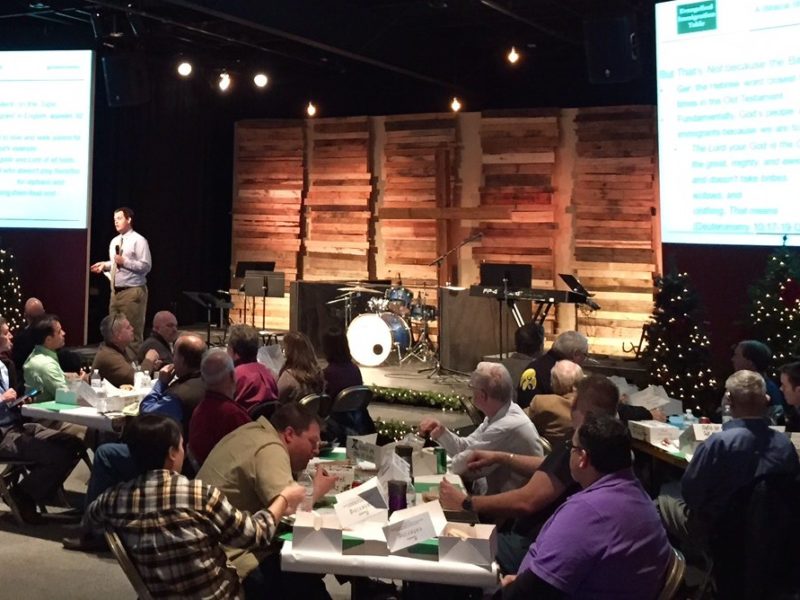 Pastors and community leaders from the greater Des Moines area enjoyed a lunch catered by Chic-fil-A as they listened to presenters and asked questions about the material. Matthew Soerens, who co-wrote the book Welcoming the Stranger with Jenny Hwang, presented a 30-minute talk on a biblical perspective on immigration. This was followed by the personal testimonies of Liz Dong and Luis Arredondo who shared their experiences as immigrants from China and Mexico. The second hour of the presentation separated fact from fiction in the current immigration debate, and offered action steps for local pastors and community leaders to advocate for change. They closed with a lively question and answer time.

The event was attended by over 50 pastors and leaders. Most of the largest and most influential churches in the metro Des Moines area were represented, including Lutheran Church of Hope which is the largest Lutheran church in the US with over 10,000 in attendance. Jon Wiest, lead pastor of Radiant Church says, “the event was a great success in bringing together a cross section of community leaders and pastors. I was very encouraged that many of our larger evangelical churches in the area were represented”.

The event was held on Dec. 11th primarily at the request of the lead presenter. Matthew Soerens is the field director for the Evangelical Immigration Table, a broad coalition of evangelical organizations and leaders advocating for immigration reform consistent with biblical values. Pastor Jon says that hosting this event was important despite the busyness of the Christmas season. “Des Moines is not only the largest metro area in Iowa at 500,000 people, but it is also a strategic city at the intersection of the two largest interstates in the country and home to the Iowa caucuses, the first stop in the presidential election.”

Pastor Jon says hosting this event was also important to him personally. “When we planted our first church in Dallas, TX I came face to face with many of the challenges of immigration. We had a large Latino population in our church and I soon discovered that a few of my closest friends had migrated to Texas unlawfully. That being said, since moving to Des Moines I have come to realize that this isn’t just an issue for my friends to the South. We have developed a deep partnership with a Congolese and Burundian congregation filled with refugees from east Africa and we also have a Latino congregation sharing our facilities. Even in the heart of the Midwest, the immigration challenge is very real and my prayer is for the evangelical church to not only care for the immigrant but also help find biblical solutions for immigration reform.”

If other Wesleyan churches would like to hold a similar event for their communities or district churches, they can contact Matthew Soerens with World Relief or visit www.evangelicalimmigrationtable.com