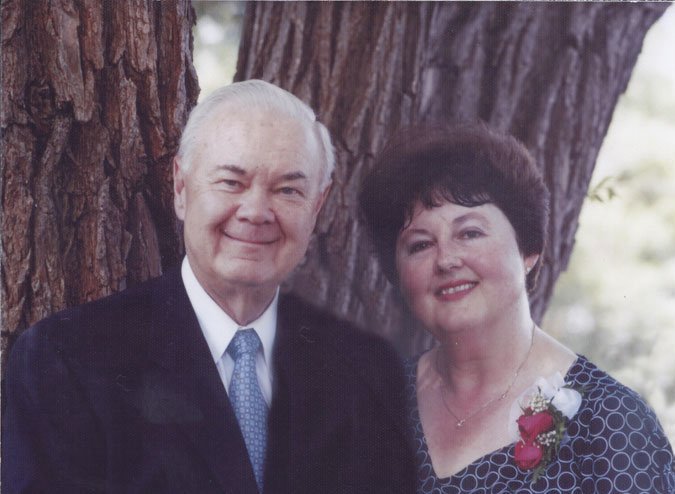 Rev. Don Hodgins has quite the "ministry resume." As the district superintendent retires he is known for his humility, character, and faithful service to The Wesleyan Church.

Rev. Don Hodgins has faithfully served the pastors and congregations of the Central Canada District as district superintendent for 18 years. After serving in ministry since 1966, Rev. Hodgins has now retired. Don is graced with a quiet, unassuming humility. Yet, in everything that Don has put his hand to, he has risen to high achievement, especially in his calling from God.

Born and raised in a Methodist home, Rev. Hodgins first began as a lay minister in 1963 in the United Church of Canada. But after only six years with the denomination he felt the pull to return to his true Methodist roots in 1969, when he began serving as a Free Methodist pastor until 1995.

In 1995, Rev. Hodgins was elected district superintendent of the Central Canada District of The Wesleyan Church. He was the first district superintendent elected from outside The Wesleyan Church. During the tenure of Rev. Hodgins’ faithful service, the district grew from 22 churches to 58. That group of 58 included 15 church plants, 19 Standard Church of America churches (holiness denomination based in Canada that merged with The Wesleyan Church in 2004), two Filipino churches, one Hispanic, one Korean, one Francophone house church, a Mandarin Chinese church, and Caribbean and African-American black churches, all in various parts of Canada. As Rev. Hodgins has said, “God has brought the world to our doorstep. We are becoming a multicultural Church in Central Canada.” The merger also included the churches in Ghana, Egypt, and Mexico. Since 2012, that ministry has been under the leadership of Global Partners, the missions arm of The Wesleyan Church.

At the 2004 General Conference, Rev. Hodgins was honored with the “Outstanding District Superintendent Award for Exceptional and Devoted Service to the work of Christ.” He was also given an award for helping to establish the Burmese Thailand Gospel Boarder Mission for Burmese refugees along the border of the two countries on the southwest side of Thailand. He has been given the title of District Superintendent Emeritus.

Rev. Hodgins also appointed the first director of planned giving for Central Canada District. In the last three years, they have written up more than $3 million for the denomination in estate planning. Three years ago, Rev. Hodgins spearheaded the concept of developing more districts across Canada, and the district hired its first director of church multiplication. At the 2012 General Conference, approval was given for the expansion of the district to include western Canada and its territories.

“I am so very grateful for the privilege of having The Wesleyan Church as my home church and denomination for nearly two decades,” said Rev. Hodgins.

Other highlights about Rev. Hodgins:

In high school, he was president of the student council, attained the rank of Major in the Hastings Prince Edward Regiment Army Cadet Corps, was linebacker for the football team that won the Central Ontario Championship three years in a row, and was bandmaster of the marching band. He achieved proficiency in trumpet, drums, and reached grade 8 in piano with the Royal Conservatory of Music, University of Toronto. He was awarded the Queen’s Boy Scout Badge with a special citation from the Lt. Governor General of Ontario.

Rev. Hodgins and his wife Diana have three accomplished daughters and ten grandchildren.

According to Don: “The three most important days in a person’s life are the day he is born (February 6, 1942 to wonderful godly parents), the day he is born again (August 1952 at Cobden Holiness Movement Family Camp), and the day he knows why he was born again (July 1975) when under the preaching of Dr. John Oswalt I received God’s sanctifying grace and he confirmed my call to the ministry. What began as a shaky step of faith became an unshakable conviction and ultimately (in the words of Peter Marshall) a magnificent obsession.”

From 1966-1980, Don was in bi-vocational ministry, appointed to lay pastor leadership in several congregations during that period. Simultaneously, he was a highly successful leader in agribusiness in Ontario and received numerous citations and awards both for business developments and for involvement in education. Notably, he received a citation from the Premier of Ontario and the Prime Minister of Canada, contributing to the overall development of Ontario and Canada.

In just one example of early pastoral ministry, Don was assigned to pastor four dying congregations with a total of 37 people in Belleville, Ontario, and to close the churches over a period of two years. Instead, he completed the assignment by combining them and building a new, debt-free church serving 225 people, most of whom he led to the Lord and discipled. This was typical of Don’s ministry as a lay pastor.

As an ordained minister in the Free Methodist Church after 1980, his church assignments in Toronto and Harrowsmith enjoyed 100-250% growth. He planted a daughter church, developed multi-cultural congregations, gave conference oversight to evangelism and church planting, and even served as acting conference superintendent. He frequently had over fifty people come to the Lord in each year of his pastoral ministry.

Since “retirement,” Rev. Hodgins has resumed pastoral duties by accepting appointment as the transitional pastor at Kingston Standard Church (Wesleyan) in Kingston, Ontario.