Missionaries and church multiplication to benefit from Habitat for Missions’ house flip in Virginia.

The folks at Broadcast Wesleyan Church in Chesapeake, Virginia, are seeing a five-year dream come to fruition — they are on the cusp of selling their first flip house for the glory of God.

Through a partnership with Habitat for Missions (HFM) — an organization founded by two Wesleyan ministers — Broadcast bought a house and has spent countless hours building, repairing, scrubbing, painting, and as of the October 2022 closing date, finally selling the house for the purpose of mission work. 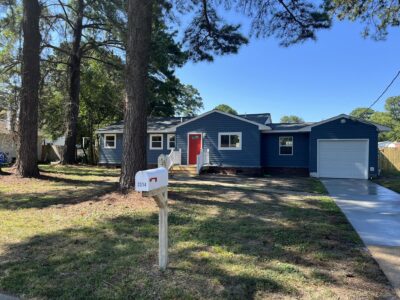 Rev. Jess Holmes, who planted Broadcast 12 years ago, has always wanted to partner with HFM. “I knew about their projects, and I always wanted to do one. This year, we came across a house that I felt was going to be a good fit and it was the right time. We’ve been talking about it for five years!”

What makes the Chesapeake house flip different from most is the money to purchase the property — approximately $200,000 — was fronted by the Shenandoah District. Of the realized profit, HFM takes 10%, Broadcast is giving another 10% to district-supported missions in El Salvador and the rest will go into the church’s Multiplication Fund.

Pastor Jess wanted the project to at least net $30,000 for the church multiplication fund. Because the extremely run-down house was in a great neighborhood and the real estate market saw some stability, the house flip was able to exceed the goal, expecting to net $40,000-$45,000 for multiplication.

Pastor Jess believes human resources is the critical component due to the importance of having people with contracting and construction experience. “Jesse Capps was there more than anyone else,” said Pastor Jess. “He’s from our church and has a construction background.” In addition, a roofer from another church was located who gave them a discount.

When Broadcast first moved into its building, which had been a store front, the heater went out. “I prayed Lord, we need an HVAC guy at the church. We had a guest at church that day and I asked what he did for a living and he said, ‘I’m a heating and air guy.’ I literally prayed for that an hour earlier.” Jesse Capps was that guy. And God has also provided other HVAC specialists like James White who donated the installation of the HVAC system in this project.

Another key component is someone who knows how to work with the city and give a realistic appraisal. “This was a much bigger project than we first thought,” said Pastor Jess. “You also need to find a broker who will donate all of their brokerage fees. The owners of Bunch Real Estate, who attend our church, did that for us.”

While Broadcast benefitted from temporary district funds, most churches will need to find a donor who can carry a loan for at least a year. “Flips don’t happen as fast as they would appear on Property Brothers or on the HGTV Network,” said Rev. Jones. “They generally take longer than you would expect due to material delivery and other delays. Our fastest flip, which was the smallest house of the three, took 10 months.”

United, a mid-sized church of about 250, flipped its first house in 2016 and was able to give about $25,000 to a local couple heading to Austria as missionaries. The second flip two years later raised $43,700 for Global Partners missionaries in Haiti, and the third flip allowed United to invest $60,000 in seed money for a church plant — Foundry Church in Taylors, South Carolina. As United was planning for its fourth flip this month, the church member who leads the flipping, Jeff Galloway, decided that due to local market conditions it would be better to buy one big parcel of land, divide it into lots, and give some of the proceeds from each sale to the church multiplication fund. Thus, United is engaging in land flipping instead of house flipping for Jesus.

Broadcast may entertain the idea of doing a flip again, said Pastor Jess, having learned from mistakes in the first round. One of the things it got right, he reflected, was to treat the project from day one as a mission. “We’ve been able to minister to the neighbors and contractors. We have a guy coming to our church because he worked on the flip, and we have had two visitors come who were on a subcontracting team,” he said. “We’re not just trying to make money but to be a blessing to everyone.”