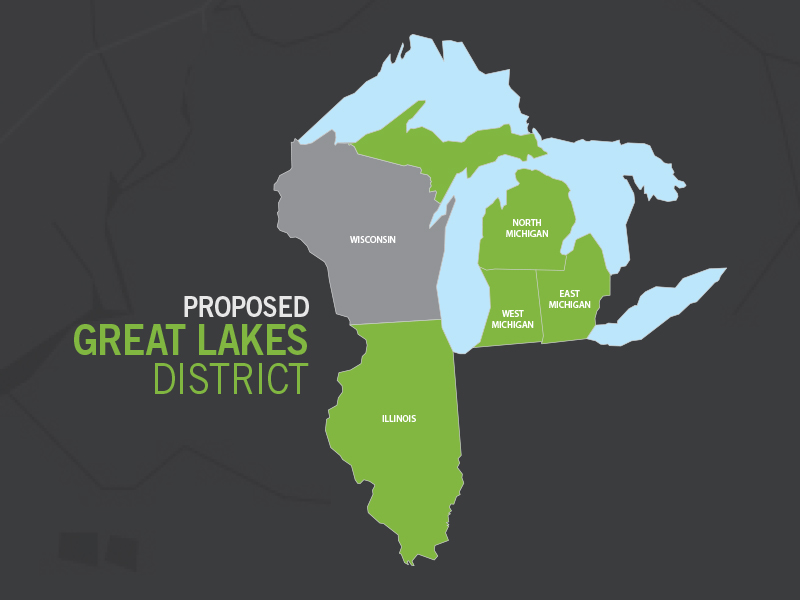 Preliminary steps this summer have been taken to merge the Illinois, East Michigan, North Michigan and West Michigan districts of The Wesleyan Church.

The districts will submit a resolution to the General Board of the denomination, requesting its approval in July 2018. Upon a favorable vote by the General Board, a merging conference will be held on August 24, 2018, to organize the newly formed district, including the election of a district superintendent and a district board of administration.

The newly-formed Great Lakes District of The Wesleyan Church will include the states of Illinois and Michigan, comprising 192 churches with a combined worship attendance of 33,991.

“We are convinced that we will be stronger together in this region as we join with other districts for the sake of the mission,” said District Superintendent Richard Meeks, East Michigan District. “We could each continue as we are, but why would we when we sense God calling us to something greater by his Spirit? If we want to see a new day, sometimes that calls us to a new way.”

“We believe the Great Lakes regional system will be transformative in nature to all sizes of local churches,” District Superintendent Al Goracke, Illinois District, said. “With the diversity of talent available to the churches and pastors through regional specialists, we believe that church revitalization will occur which will ultimately lead to the multiplication of churches, leaders and ministries.”

“It is evident that the district boundaries need to be removed and that joining together to reach the unchurched and unreached people of the Great Lakes District is the right decision,” said District Superintendent Tom Schmidt, North Michigan District. “Soul care of our pastors’ families, leadership development through relationships, strengthening and resourcing existing churches, fit and flourished leaders serving as God has gifted and unleashing the apostolic imagination to be a church multiplication movement were the driving forces to create the new Great Lakes District of The Wesleyan Church.”

“The West Michigan District conference delegates voted to become the Great Lakes District with a combined commitment to passionately pursue Jesus Christ,”said District Superintendent Chris Conrad, West Michigan District. “Together, the strengths of each former district will be joined to effectively make and multiply disciples, leaders and churches to reach the 22 million individuals in our midst who are not walking in a relationship with Jesus Christ today.”

“As God brings the Great Lakes District together, we believe we will become a kingdom force that brings more people to Jesus and makes more disciples; that we will learn from one another in broader and deeper relationships; that we will find ways to more effectively strengthen churches and start new ones; that we will see a multiplication movement.” Meeks said.