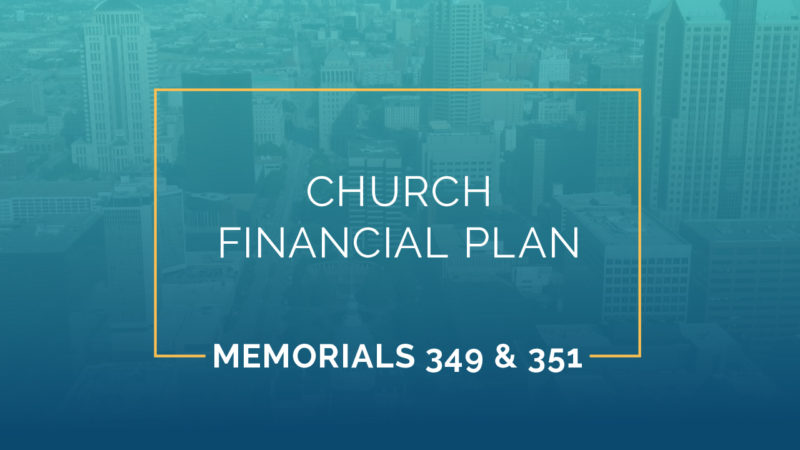 A task force of The Wesleyan Church has been studying the financial funding model since the 13th General Conference in 2016 and developed a plan to simplify the process.

The task force created Memorial 349: General Church Financial Plan, which was passed at General Conference and will phase in starting in conference year 2023-2024 and be fully implemented by the start of conference year 2027-2028. The plan recommends that districts assess no more than 10% of a church’s base income. Base income is simply tithes and offerings that are not earmarked by donors for any special use. This money is used to support the operations and the mission of the denomination, WE5 educational institutions and districts. The General Conference is responsible to set assessment rates for general and educational funds while district conferences are responsible to set district rates.

An important new part of this plan is to require districts to allocate 1% of assessable net income for church multiplication.

Of the amounts assessed by districts, a range of 9.5% to 12.5%, assessments of 6% have been forwarded to the general church for general operations and education, leaving a remainder of 3.5% to 6.5% for district operations. Under Memorial 349, the general and education assessment will be reduced over a four-year period from 6% to 5.25%. Currently, a church’s assessment is distributed three ways: 2.75% goes to the USF-general, 3.25% goes to USF-education and districts set the third percentage to fund their operations. Under the new model this distribution model will show up as four funds — general church (headquarters and administration), education (colleges and credentialing), districts and multiplication.

Task Force Chairman, North Carolina West District Superintendent Jerry Lumston, explains it this way, “The new plan does away with calling it USF-EIF and USF-general, and simply says we will have these four fund categories — general church, education, district and multiplication.” 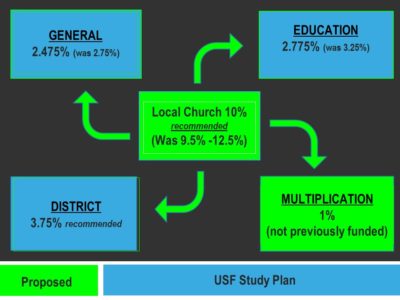 Of the total assessment recommended by the memorial of no more than 10%, the recommended distribution of that 10% is that 3.75% of it stay with the district, 2.475% (previously 2.75%) go to the general church, 2.775% go to education (previously 3.25%) and 1% goes to the new church multiplication fund (retained and expended at the district level). Rev. Lumston says the changes will impact each district differently, based on factors such as how much they have been assessing for operations, and how much they already have been setting aside for planting. Districts have the authority to establish their own rate for district operations, thus the 10% being a recommendation rather than a requirement.

For the church multiplication piece, districts will be required to show in their budgets that they spend at least 10% on church multiplication. That 10% can come from anywhere — for example, a combination of USF, interest on investments plus rental income. This multiplication fund is to help local churches show where their money is going, and that they are funding multiplication. “Primarily it will stay on the district level because the district is the one that usually resources more directly the local churches. But there will be a step of accountability and assure people that fund is being handled properly,” Rev. Lumston stated.

For struggling or smaller churches that are in “developing church” status, another financial memorial that passed is Memorial 351 to help ease their financial burden. Noting that the number of churches in developing status was at about 450 in 2019, and that the USF payment is a particular burden for them, this memorial resolves to give those churches a $50,000 exemption so that it reads, “Whenever a developing church is deemed to be under financial duress by the District Board of Administration, that board may subtract up to $50,000 from the USF base income used to calculate the USF obligation.”