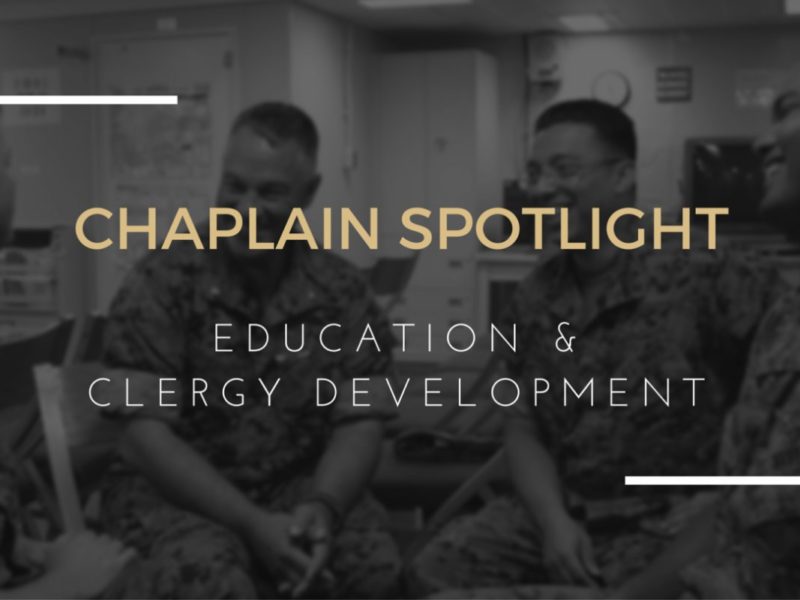 Gordon Ritchie recently retired from a fulfilling career as a United States Marine Corps Chaplain. After twenty-four years of service, Ritchie has had an influence on many young people in the US Navy

Gordon Ritchie recently retired from a fulfilling career as a United States Marine Corps Chaplain. After twenty-four years of service, Ritchie has had an influence on many young people in the United States Navy. His career–shaped by honor, hope, presence, and joy–have made Ritchie a physician of the soul.

His career–shaped by honor, hope, presence, and joy–made Ritchie a physician of the soul.

“I got the opportunity to touch the lives of people who might never touch the door of a church,” he reflects. Many of the men Ritchie was in contact with had poor previous experiences with the Church, and some came from troubled situations. It was Mr. Ritchie’s goal to be hope in a dark place.

Ritchie’s presence and message of hope, in and out of a crisis, inspired and consoled. When he entered the room, the soldiers breathed a sigh of relief. The proximity he shared with the men rendered him to closer scrutiny and greater opportunity than many other areas of ministry. For Ritchie, caring for the least of these, “the last one picked for kickball,” was of the utmost importance. The example he and his fellow chaplains displayed was often the only glimpse of spirituality men in the service encountered.

“There is always hope,” Ritchie said. Regardless of the situation, Ritchie was the example of Christ to those he was around. Moral injury, an increasingly notorious symptom of warfare, is countered by the chaplain’s presence of peace. Mr. Ritchie was “Mr. Reliable” for those in need: a consistent source of consolation.

To remain a positive presence, chaplains need to stay close to their roots.

To remain a positive presence, chaplains need to stay close to their roots. The same is true for any ministry, but amidst the diverse world of the military, persistent prayer, meditation, and study are key to a healthy life. Ritchie had the privilege of working with chaplains of many faiths over the years: Protestants, Catholics, Buddhists, and Muslims. Being in a position of leadership and fellowship with such different ideologies remains one of Ritchie’s fondest memories. True leadership necessitates the ability to manage a diverse group of people with grace and love. It was enriching, and sometimes challenging, to have cordial conversations with his colleagues. Some of his closest friendships emerged out of these relationships.

True leadership necessitates the ability to manage a diverse group of people with grace and love.

Ritchie’s wife and three children served alongside him all twenty-four years. Ritchie’s wife Lasana was the backbone of the family. While Ritchie was deployed, Lasana raised up a family of character. Ritchie reflects on this with fondness, and encouraging all who would pray for chaplains to pray as you would for missionaries and the families supporting them. “Those who wait also serve.”

The spouse of anyone in the military serves just as well.