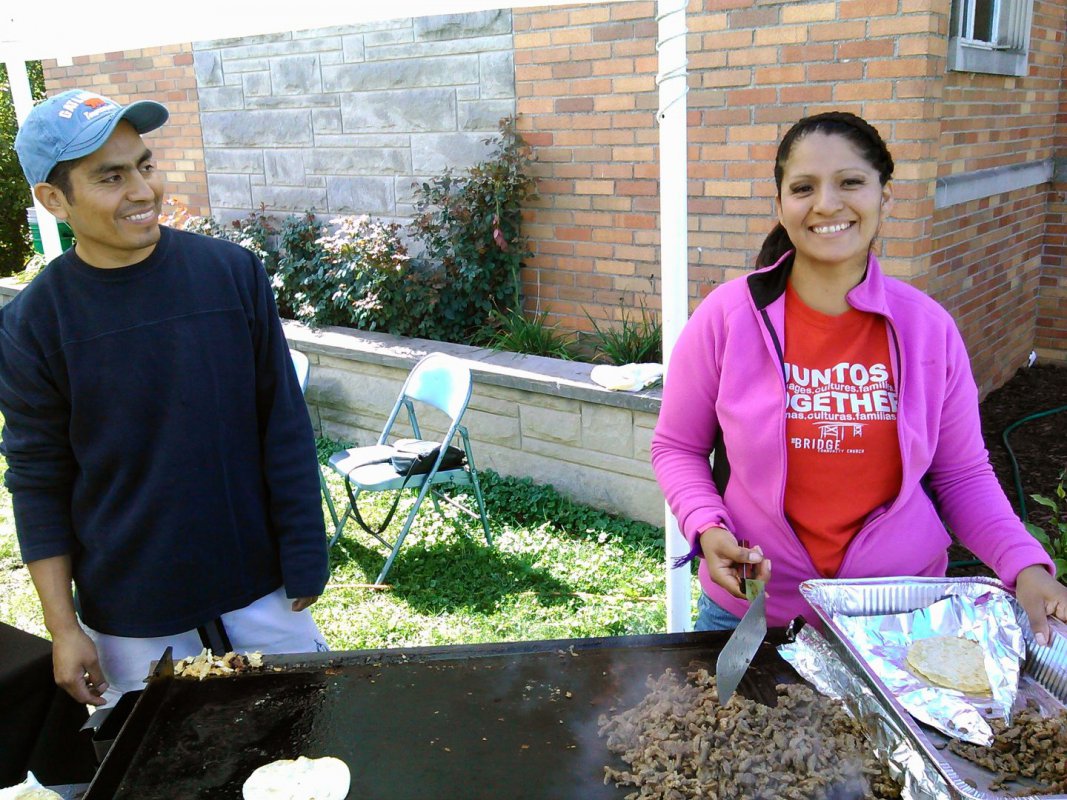 Neither bees nor a chill wind could faze Coral Briseno or Grisel Elias as they dished up tacos, flautas and other traditionally Mexican foods Saturday.

It was “Probadita de México,” or “Taste of Mexico,” at The Bridge Community Church on Linden Avenue, where the church’s Spanish- and English-speaking members served a variety of Mexican foods in honor of the country’s upcoming celebration of independence.

Mexico’s “Día de Independencia,” or Independence Day, started at midnight Monday, Sept. 15 and is celebrated throughout the day Tuesday, Sept. 16.

“Mexicans always celebrate with eating,” Briseno, 30, said in Spanish as she seasoned a plate of food on Saturday. A native of Mexico, she characterized the act of sharing food as a typical way Mexicans express neighborliness and friendship.

And it serves as a bridge between recent immigrants from Mexico and longtime Logansport-area residents, she added.

“Many people … come here because of problems,” she said, they’d experienced in their own country, and locals see the new arrivals as strange or weird.

But when longtime residents get to know more recent immigrants — over a plate of food, for example — they begin to understand and love them, Briseno said.

Roughly equal numbers of English- and Spanish-speaking visitors sampled the Mexican dishes Saturday, Sept. 13, exchanging smiles and chatter in both languages as they finished their lunch.

The church’s congregation is about half Mexican and half “American,” as the members described themselves or each other, on a given Sunday morning, with a few natives of Guatemala attending as well.

That’s somewhat reflective of Logansport’s diverse population — the most recent census data indicates more than 15 percent of city residents are of Mexican origin, and another 6 percent have their heritage in other Central or South American countries.

Some natives of Mexico begin to identify more as American than Mexican, including Briseno’s 7-year-old son. She hopes to teach him to remember his family’s heritage through events like “Taste of Mexico.”

Older residents who spent years in Mexico remember the events accompanying the country’s Independence Day — the parades, the schoolchildren’s dress-up days, and of course the food.

Abigail Guerrero, 30, moved to the U.S. a year ago and recalls her family making “pozoles,” a sort of stew with ham or chicken, each year for Mexican Independence Day. She described parades including dancers and acrobats forming human pyramids as onlookers filled the streets.

The parades were her favorite part of the country’s independence celebrations, she said.

While in the U.S., Cinco de Mayo is typically identified with Mexico’s fight for independence, it’s a relatively minor holiday in Mexico. Instead, Mexicans point to the early morning of Sept. 16, 1810, when Miguel Hidalgo, one of the nation’s leaders at the time, made a speech at the town of Dolores to motivate his countrymen to revolt against Spain.

The speech is memorialized as Sept. 15 turns to Sept. 16, when Mexico’s president lets out the “Grito de Independencia” or “cry of independence.” It’s a shout of “Viva Mexico!” to which throngs of people filling the streets answer back with the same phrase, meaning “long live Mexico.”

As the cry is answered, a volley of fireworks begins, too. Elias, who lived in Mexico until she was 13, remembered joining the crowds for the Grito as a child.

“It was like here, a big deal for us over there,” Elias, now 30, said. “It’s very exciting … Just seeing all the people coming together, seeing how proud they are.”

Now that Elias’s family lives in the U.S., they may watch the celebrations on TV if they take place on a weekend. “It’s still your heritage. You still want to remember,” she explained.