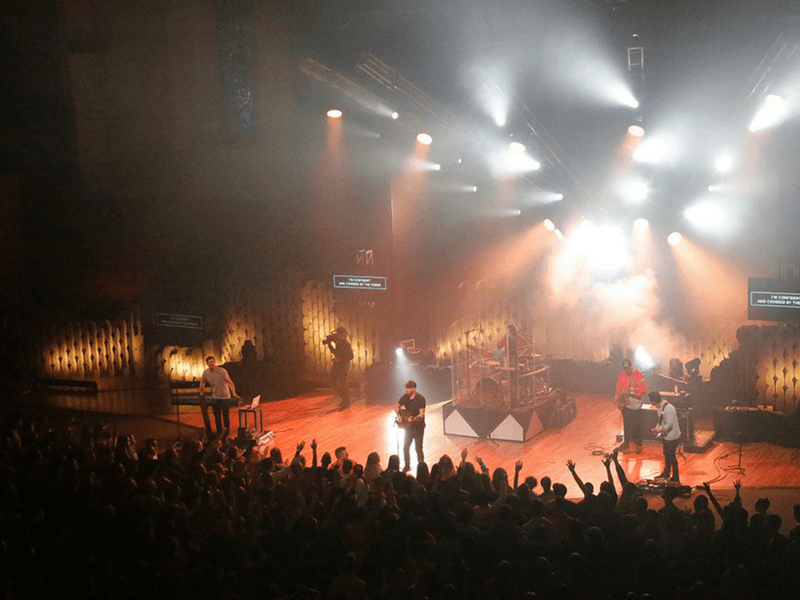 FUSION 2018 was designed to help students experience the love of Christ, sense his power at work and begin a life transformed.

Indiana Wesleyan University welcomed nearly 1,000 high school students and their adult sponsors to campus April 6-7 for FUSION 2018. The annual event is a two-day high school youth conference dedicated to providing a space for students to grow closer to God. FUSION 2018 was designed to help students experience the love of Christ, sense his power at work and begin a life transformed.

Nearly 3,500 people attended FUSION’s Friday night concert featuring Bethel Worship with Cory Asbury. Asbury is a worship leader and songwriter who joined the Bethel Music Collective in May of 2015. He’s most known for his song “Reckless Love.” He is also featured on Bethel Music’s “Have It All” album with his song “Son of God.” He serves as worship pastor at Radiant Church in Kalamazoo, Michigan.

High school conference attendees stayed on the IWU campus through Saturday where they participated in worship, various seminars and recreational activities. Main sessions featured Zach Coffin, who is the director of Next Generation Multiplication & Discipleship for The Wesleyan Church. Through the years, he has served as kids’ pastor, student pastor and Next Gen pastor at various sized churches across the country.

“We are so thankful for another successful FUSION weekend,” said Charlie Alcock, director of youth ministry events. “The entire weekend, God was present and working. We saw so many young lives forever changed. We had over 1,000 decisions for Christ that ranged from first-time commitments to those who are looking to go deeper in their relationship with Christ.

“Reports surfaced of classes becoming sanctuaries as one Tuesday night class the following week began with a short report about FUSION and ended over two hours later with students praying for one another and testifying of life changes,” said Alcock. “One class this week saw five students proclaiming Jesus as Lord or rededicating their lives to him.”

Alcock goes on to express his gratitude to those who supported and attended the event.

“What a privilege it is to join the The Wesleyan Church (TWC) in loving these high school students and their leaders. The FUSION leadership team is made up of 18 IWU students who were joined by another 440 students who were the backbone of this conference. These are your students, TWC, coming from your churches, outreach programs and families.

“Thank you to all the pastors, youth pastors and volunteer leaders who made the journey, some driving more than 20 hours. You are heroes and hero makers.”