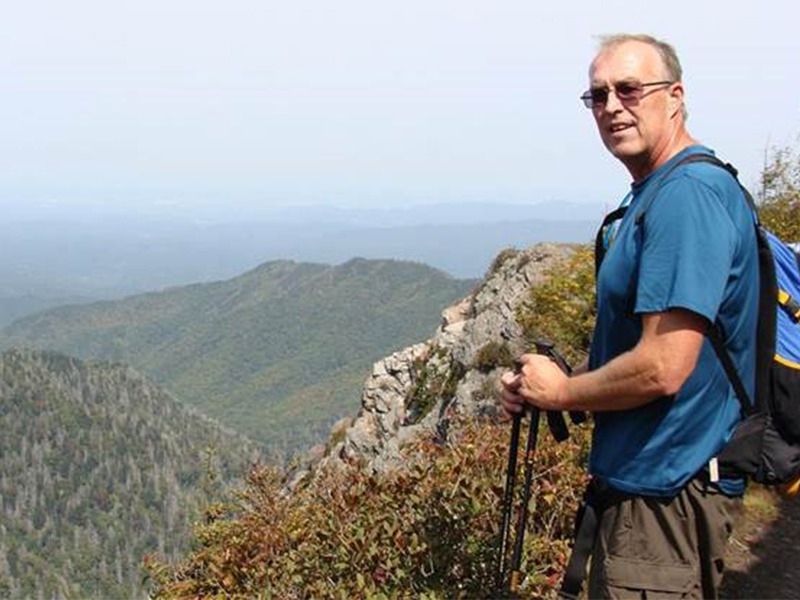 To date, Young has hiked major portions of the Appalachian Trail (AT), a 2,180 mile long public footpath that extends from Springer Mountain in Georgia to Mount Katahdin in Maine. He didn’t even know the AT existed until he attended Bates College in Maine as an undergraduate student. As a member of Bates’ Outdoor Club, Young took a weekend backpacking trip and became hooked on hiking the AT.

He has hiked approximately 1,100 miles of the iconic trail, from its northern terminus at Mount Katahdin to the Maryland border, as well as portions in the southern Appalachians. He currently plans to hike a 500-mile portion of the trail in Maryland, West Virginia and Virginia, a stretch that includes some of the most challenging passages. Young estimates that it will take approximately 40 days to complete the segment.

“I literally smiled to myself and said ’40 days in the wilderness,’” quipped Young about the biblical reference.

When Young started making his hiking plans, it occurred to him that there was a plan to move the School of Business to Stuart-Bennett Hall, an older residence hall being renovated.

“I started wondering if there was a fundraising opportunity in here somewhere,” Young said.

Young is literally “taking steps” in a gesture of contagious generosity to raise $50,000 to support Southern Wesleyan’s School of Business to endow business scholarships and help provide state-of-the-art equipment and renovations for the school’s new location at Stuart-Bennett Hall.

The 65-year-old Young has resumed his plans to hike a portion of the trail, starting out Sept. 10 and hoping to finish the 500 mile stretch by Oct. 20. Earlier plans got sidetracked by arthritis in his hips and knees and also a torn meniscus in his left knee. With the problem knee now treated and having spent days conditioning himself, Young feels physically ready to proceed, and, with the hiring of a new dean for the School of Business, he can step away from his duties as interim dean and professor to hit the trail.

“My body is starting to remind me of its limitations, so my goal now is to try to complete the trail by 2018,” Young joked.

For details or to give online, go to swu.edu/journey or contact Southern Wesleyan’s Advancement Office at (864) 644-5008. The emphasis is on a hundred donors stepping forward by the time Young begins hiking on Sept. 10.

Southern Wesleyan University is a Christ-centered, student-focused learning community devoted to transforming lives by challenging students to be dedicated scholars and servant-leaders who impact the world for Christ. For details about degree programs, go online to swu.edu.