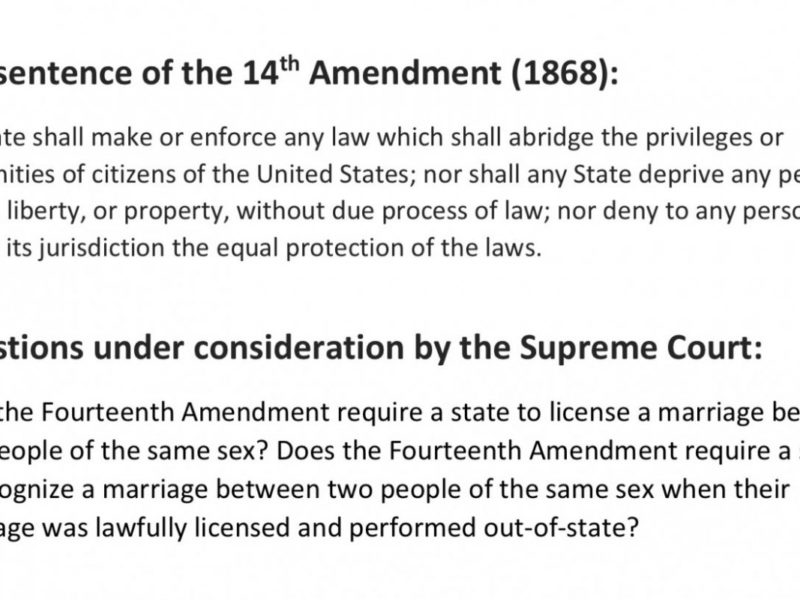 National Association of Evangelicals staff have written a marriage and religious freedom list of Q&A about the basics regarding the hot topic.

What is “The Defense of Marriage and the Right of Religious Freedom: Reaffirming a Shared Witness,” and who is it addressed to?

It is an open letter signed by religious leaders of different faith communities throughout the United States. It expresses a shared commitment to promoting and protecting marriage as the union of one man and one woman. The letter is addressed to those in positions of public service. By the breadth of its signers, the letter shows that protecting marriage is important to a significant number of people and an issue of justice for all.

Why is the letter being released now?

The letter is being released now in anticipation of the Supreme Court’s deliberation on the right of states to define marriage as the union of one man and one woman, with oral arguments set for April 28, 2015 and a decision expected by the end of the Court’s term in June. Marriage, the union of one man and one woman, is a unique and irreplaceable institution, essential to the common good and a matter of justice for children. This letter serves as an invitation and encouragement to promote and protect the true definition of marriage. In addition, marriage and religious freedom are closely bound together. There have been grossly inaccurate comparisons of religious beliefs and moral convictions about marriage to racism, bigotry, or hate. People who hold to the unique meaning of marriage have seen their basic freedoms curtailed. The letter encourages more civil discourse on this topic.

Isn’t redefining marriage to include two persons of the same sex a question of civil rights?

No. Understanding this point is essential to understanding how civil discourse can move forward on this topic. People already have the right to marry; this is recognized as a fundamental right under the U.S. Constitution and is also a right under the U.N. Declaration of Human Rights. The real question is what marriage is, and such a debate has often been suppressed or avoided. For example, this nation’s previous laws against marriage based on skin color, which are frequently cited in arguments today, had nothing to do with the actual capability of the two persons involved to become a married couple. In other words, those laws existed to prevent unjustly what everyone knew could happen: interracial marriage between one man and one woman. Marriage is “color blind,” but it is not “gender blind.” The question of civil rights begs the question of the meaning of marriage itself.

What is marriage then?

Marriage is the only institution that unites a man and a woman together and any children that come from their union. But proposals to legally redefine marriage to include other types of relationships are using the term “marriage” to mean a more or less intense form of companionship and emotional bond between any two consenting adults. This difference is decisive. Marriage does not change according to adult desires, and even if childbearing opportunities inherent in marital union are sometimes unrealized, this does nothing to undermine the immense societal value of a law recognizing the unique status of such unions. No one has a right to eliminate from marriage’s fundamental core the sexual difference and complementarity of man and woman. When marriage is properly understood, then it is possible to see why it needs to be recognized and protected as such by the State, not deconstructed and redefined.

Whose rights are at stake?

The civil rights that are actually at stake are those of children. Children have a basic human right to know and be raised by both their mother and father, whenever possible. The proposal to redefine marriage not only encourages and privileges fatherless and motherless environments, but it also teaches that fathers and mothers are interchangeable or dispensable. The State has the responsibility to

protect basic human rights, not invent special “rights” that conflict with the intrinsic dignity of every human person.

There are also significant concerns about the natural and civil right of religious freedom: See below.

What is religious freedom?

Why does the redefinition of marriage pose a serious threat to religious freedom? The legal redefinition of marriage threatens religious liberty by forcing persons that adhere to the definition of marriage as the union of one man and one woman to provide same-sex sexual relationships the same special treatment legally due to marriages. When people of faith resist, they may face civil and even criminal sanctions, including court orders compelling actions against conscience, financial penalties, and general marginalization in public life. And because the legal redefinition changes not one law but hundreds at once, the full range of consequences for religious liberty will be widespread and difficult—if not impossible—to anticipate. For a country that espouses freedom and tolerance of diversity, the intolerance that has been shown for people who stand for marriage as the union of one man and one woman and who are motivated by sincere and respectful religious beliefs and moral convictions is striking.

But what about persons who experience same-sex attraction? Every human person has inviolable dignity, having been created in the image of God, and must be accepted with respect, compassion, and love. Unjust discrimination against any person is wrong and must not be tolerated. Pastoral outreach to persons who experience same-sex attraction and their families is vitally important, as is encouragement and support for every person to embrace chastity as a necessary part of a holy and happy life.

Isn’t the redefinition of marriage inevitable? No. Even if it happens in law, the truth of marriage is unchangable; no law, no matter the force behind it, can erase it. Hence, attempts to do so instead create only systemic conflict between law and conscience. Especially at a time when marriages, families, wives, husbands, and children have suffered much hardship and brokenness, leaders in this country have a responsibility to work to strengthen marriage, not redefine it.

Why care? Everybody comes from a family and has a family legacy. Everybody has a mother and a father, grandparents, and great-grandparents, regardless of whether they are still living. The truth about marriage and the family and what it means to be a man or a woman concerns everyone. The religious leaders who signed the open letter recognize that they have been charged by God to serve and witness to this truth. Regardless of what might happen concerning the legal definition of marriage, the letter reaffirms a commitment to witness to the unique meaning of marriage and calls for those in public service to do the same. Marriage and religious freedom are tied to the fundamental health and well-being of any society. Government leaders, entrusted with caring for the common good, should be concerned with all matters that bear essentially upon the well-being of society. The truth of marriage should matter to all people, and the witness of people of good will to this beautiful truth will endure despite attempts to silence or dismiss it.

*Organizers of the letter on “The Defense of Marriage and the Right of Religious Freedom” letter have provided this marriage and religious freedom list of Q&A. Special thanks to the staff of the U.S. Conference of Catholic Bishops.