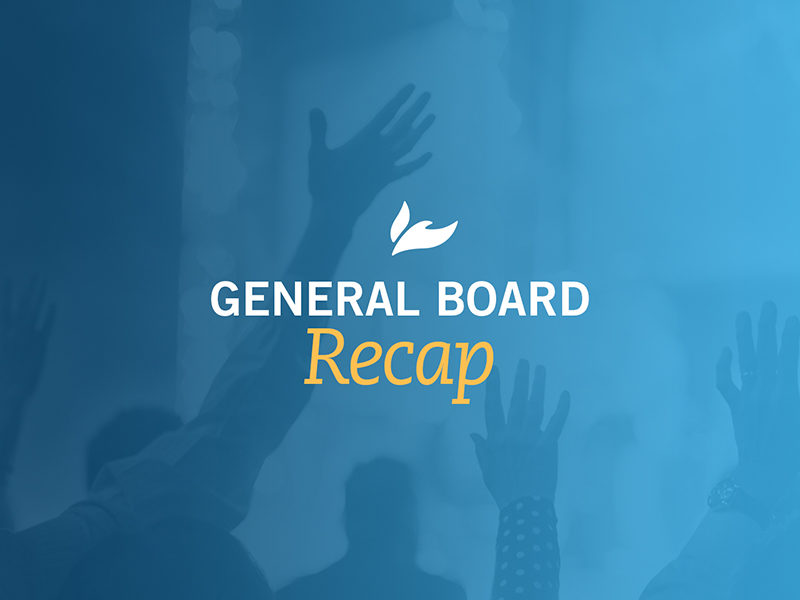 The meeting was full of inspirational moments, including special prayer for Follow youth conference and celebrating a milestone for Wesleyan Publishing House.

Rev. Jose Pacheco, campus pastor with Central Wesleyan Church in Holland, Michigan, attended his first meeting of the General Board of The Wesleyan Church as it convened its 140th session on November 19-20, 2019, at the denominational headquarters in Fishers, Indiana.

Pacheco serves as a clergy representative on the board for the North Central Area. He replaced Rev. Kyle Ray, who left Kentwood (Michigan) Community Church, to assume the pastorate of Sent Church, a Wesleyan congregation in Plano, Texas, a suburb of Dallas.

Dr. Jim Dunn, no stranger to denominational headquarters, also attended his first meeting of the General Board as an advisory member, a role that comes with his position as president of Oklahoma Wesleyan University in Bartlesville, Oklahoma. Dunn took office in June 2019 upon the retirement of Dr. Everett Piper from that position, a post he had held since 2002. The presidents of all Wesleyan institutions of higher education are advisory members of the General Board. Dunn previously served at denominational headquarters, first as general director of spiritual formation, then executive director of church multiplication and discipleship, then as vice-president of church relations for the Wesleyan Investment Foundation.

Anita Eastlack, executive director of church multiplication and discipleship, gave an update on Hephzibah62:4, including the distribution of a prayer and mobilization guide, which provided information on its engagement with vulnerable children.

Chief Financial Officer Kevin Batman gave an annual report for The Wesleyan Church, showing one of the best years financially in recent history. He announced that the Church exceeded its goal of allocating 10 percent of its budget for church multiplication for Fiscal Year 2019. The board gave approval for the formation of Immigrant Connection, Inc., to better serve the 19 Wesleyan Church-based Immigrant Connection legal services offices and to expand its assistance to other denominational and non-denominational churches.

Craig Dunn, CEO of Wesleyan Investment Foundation (WIF), provided general updates on the financial health and expanding impact of WIF, including celebrating 73 years of ministry to The Wesleyan Church.

General Board members also spent time praying for students, leaders and speakers who will attend Follow, the upcoming youth conference, which will take place this December in Cincinnati, Ohio. Rev. Zach Coffin, director of Next Gen Multiplication and Discipleship for The Wesleyan Church, and Christen Carlson, Next Gen administrative assistant, were prayed over during the time with General Board.