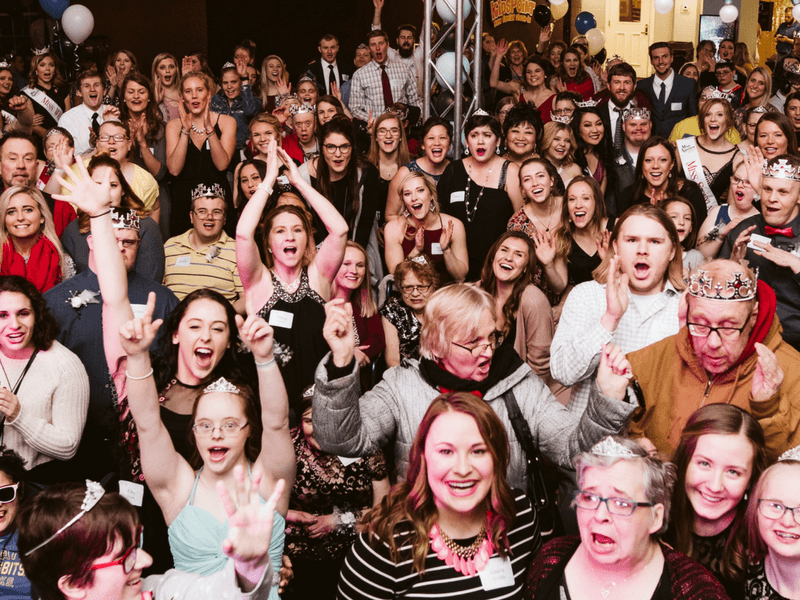 Night to Shine a joyous occasion at Wesleyan churches

A handful of Wesleyan churches across the country joined in the annual Night to Shine (NTS), sponsored by the Tim Tebow Foundation. According to the foundation, “Night to Shine is an unforgettable prom night experience, centered on God’s love, for people with special needs ages 14 and older.”

The church sanctuary was turned into a prom hall for a night of joy, love and laughter.

“This was a wonderful opportunity to see the fruit of discipleship as love in action,” said Gladden. “Every volunteer I talked to was overjoyed with the privilege of serving this special community.”

Gladden noted the specialness of the event.

“I found myself smiling all evening and sharing the joy with our special needs friends of what it meant to be in a place celebrating and affirming their uniqueness,” said Gladden. “Community Church showed outstanding hospitality to both those attending the Night to Shine Prom and their caretakers. I was blown away that so much love could be packed into one evening.”

“My favorite story is the guest who was surprised by one of her classmates from school,” said Rebekah Maynard, a volunteer with CWC Night to Shine. “She (the guest) did not know he was coming and he was able to surprise her and be her buddy! Both parents had tears in their eyes and were amazed at such an exciting event and that someone would go to those lengths for their daughter.”

One guest was so happy to come to Night to Shine this year, because she bought a dress last year but then had the flu and couldn’t make it. She was so sad to miss the prom last year. She has had that dress hanging up all year and she was SO happy to finally wear it.

Another guest was super excited about his flower that got pinned on at the beginning of the evening. He pulled his volunteer host aside to double check that he was getting to take it home.

A sister of a guest said, “This is such a great night. It is so nice to see others loving my brother. He is smiling ear to ear.”

Many parents said they had a blast through dinner, dancing and the respite room.

A guest named Zeke got introduced to a volunteer named Zeke. He was so excited to meet another Zeke.

Here are a few stories from volunteers:

We had a 16-year-old volunteer who had never been to GracePoint before and didn’t know anyone there. He came at 4 p.m. to help with food and set up and stayed through final clean-up until 10:30 p.m.

A returning volunteer host shared that her buddy from last year came to her and grabbed her hand because she remembered her from last time. She also shared, “The guest I was with this year was not able to speak much but she smiled and smiled, which melted my heart.”

Another returning volunteer shared that his guest from last year requested him as a buddy again and told him during the limo ride that they became best friends last year at Night to Shine. He can’t wait until next year so they can hang out again.

One of the pageant queens who came to spend the evening said she was more touched by being there than any of the guests.