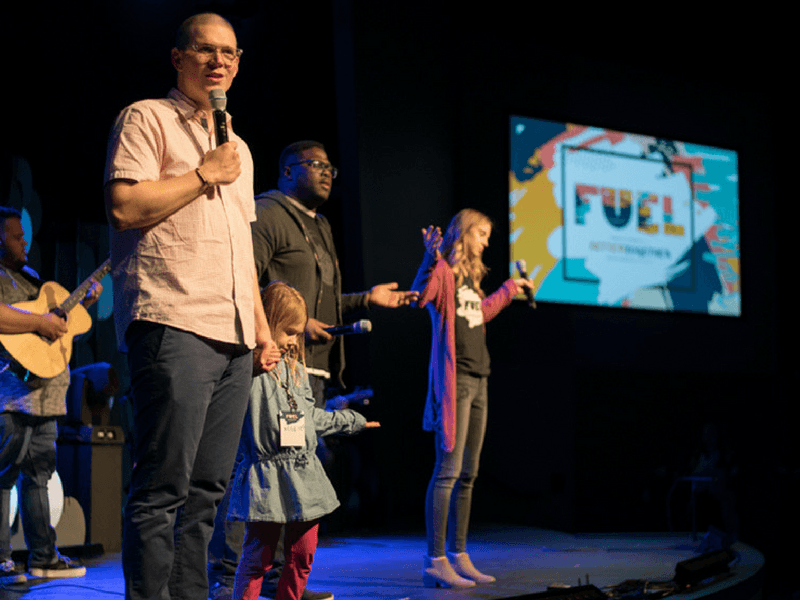 Kids and youth ministry workers at Fuel were reminded that the call to make disciples, unleash kingdom multipliers and walk in unity applies to all ages and generations.

More than 320+ youth and kids’ workers (clergy and lay) across North America gathered to seek God, refuel their souls and discover how they are #bettertogether at the annual Fuel Conference. The event was held in early February in Fishers, Indiana.

Fuel has historically been a youth worker gathering, but this year the strategic decision was made to include kids’ workers to align everyone who is working in Next Generation Ministries in The Wesleyan Church.

Eighteen speakers from across the Wesleyan Next Gen movement shared and trained those in attendance. Christian Cuevas, a contestant on NBC’s “The Voice,” led worship on Thursday night to open the event and Zach Coffin, director of Next Gen Multiplication and Discipleship, presented a prophetic call that we are #bettertogether within youth and kids ministry.

Watch a video recap of Fuel

From the beginning of the gathering the Holy Spirit was palpable and the unity in the room was inspiring.

A two-hour service was scheduled as part of the Fuel program, but it lasted three hours. A messaged focused on Joshua 6 encouraged participants to examine hearts in humility.

“The challenge of the message was for people to stop worrying about their titles or positions and focus on the greatest call to make disciples,” said Coffin. “God didn’t call you into a position; he called you to disciple people into his promise land.”

For more than an hour, following the message, participants worshiped, repented and asked God to “unleash a disciple-making generation.” Multi-generational and multi-ethnic church staff teams prayed together. Coffin said, “God’s presence was thick like a fog and we didn’t rush past the moment of encounter.”

“The way that God was moving at Fuel—I have never experienced anything like it in my life,” said one kids’ ministry lay leader, following the three-hour service of worship, prayer and anointing. “I’m in awe of God and it was amazing to be with so many people hungry for God’s presence.”

On the second day, General Superintendent Dr. Wayne Schmidt spoke on the “marks of a movement.” Schmidt highlighted that if we are going to close the “Gospel Gap” and become a movement, we will need a strong “kingdom force” of laborers. He called for a Holy Spirit-filled kingdom force that is multi-generational, multi-ethnic, men and women and both lay and clergy. This call puts Next Gen Ministries and leaders at the center of the target.

“Fuel served as a reminder that the Holy Spirit-filled kingdom force is multi-generational,” said Coffin. “The call to make disciples, unleash kingdom multipliers and walk in unity is for all ages.  What could your church do to empower kids, youth and young adults to be disciple makers and kingdom multipliers now? How can we, together, unleash a generation now to be the kingdom force that will spark a fresh move of God?”