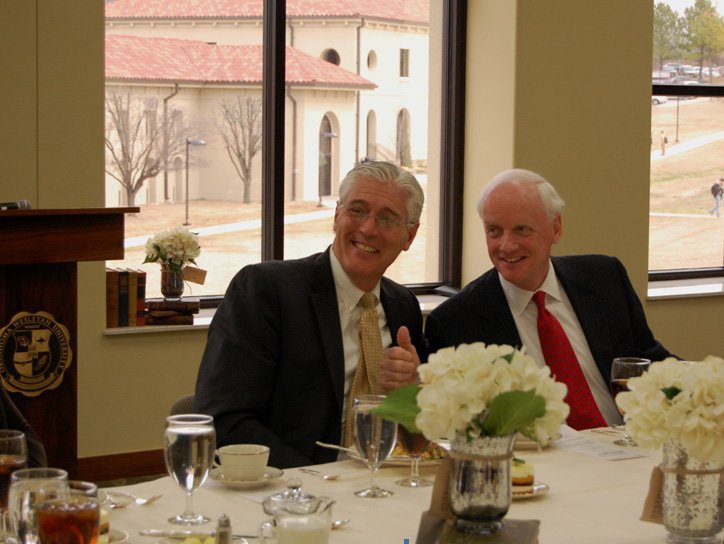 Oklahoma Wesleyan University (OKWU) held a dedication chapel and ribbon-cutting ceremony to dedicate its new campus building, The Keating Center for Capitalism, Free Enterprise and Constitutional Liberty, on Friday, March 8. The building was named after former Oklahoma Governor Frank Keating and his wife, Cathy, for their exemplary service to the State of Oklahoma and the nation.

The Keating Center is a beautiful new building on Oklahoma Wesleyan University’s campus, but according to President Everett Piper, “The Keating Center is about ideas. It is not really about a building. And the ideas taught in this Center and at OKWU indeed will bear fruit, and will have consequences – good fruit and good consequences today, tomorrow, for ourselves and for posterity.”

In addition to former Governor Frank Keating, several other business and government leaders were in attendance. U.S. Congressman Jim Bridenstine opened the dedication chapel by honoring the namesake of the Keating Center saying, “Gov. Keating’s career is filled with accomplishments that have been aimed at preserving the very principles that this center now aims to foster.”

Dr. Brett Andrews, school of business dean and vice president for program development at OKWU, emphasized the connection between Christianity and capitalism by quoting our fourth president, James Madison: “Our Constitution was made only for a moral and religious people. It is wholly inadequate to the government of any other.”

According to university president Dr. Piper, “Capitalism, free enterprise, and liberty can only be enjoyed, preserved, and protected if such ideals are grounded in something more enduring and permanent than even our country’s founding documents. Freedom is a gift from God; it is not endowed to us by man.”