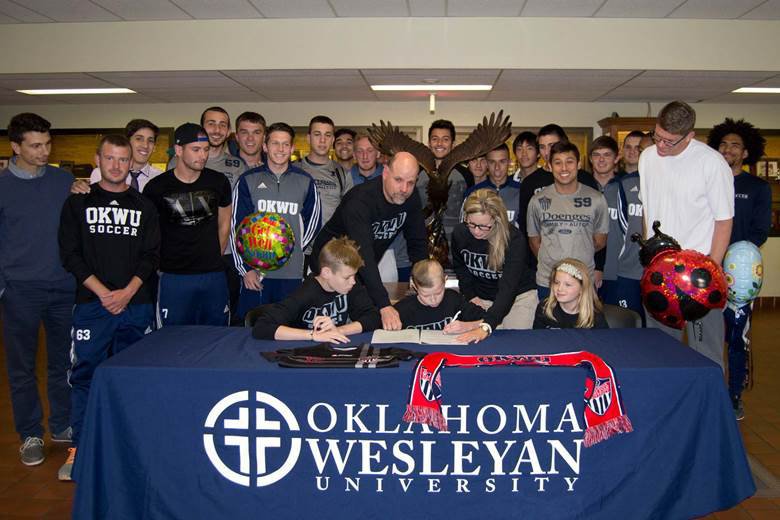 OKWU men's soccer recently signed a new recruit, one who is already loved by the team and coaching staff. Mason Green, 12, is fighting brain cancer, and the team added him to the roster.

Mason Green, 12-year-old soccer player and Oklahoma Wesleyan University Eagles fan, is battling an aggressive form of brain cancer. This fight hasn’t kept him away from OKWU Soccer, however. On April 24, he signed a letter of intent for the Eagles Soccer Program. The signing ceremony also began a partnership with the Friends of Jaclyn Foundation. The foundation is a nonprofit that partners fans like Mason with their favorite high school or college teams to raise funds and awareness to fight pediatric brain tumors.

Throughout an intense treatment process, Mason and his family have remained strong supporters of the team, attending every game possible and becoming true members of the OKWU soccer family. Likewise, OKWU Soccer has become part of Team Mason, having special practices with Mason and his family, as well as telling his story at every game. Several players even shaved a “C-cut” in their hair to match Mason’s from a surgery.

Mason’s mother, Monica Green, knew of the foundation and when Friends of Jaclyn reached out, Coach Jamie Peterson didn’t hesitate. “Mason is an unbelievable young man. The strength he’s had to overcome and keep winning after being given no chance is incredible. That miracle of God has had a huge impact on our team.”

The Eagles plan to host a cancer awareness fundraiser at their opener against MidAmerica Nazarene in the upcoming season. All proceeds from the event will go toward the Friends of Jaclyn Foundation.