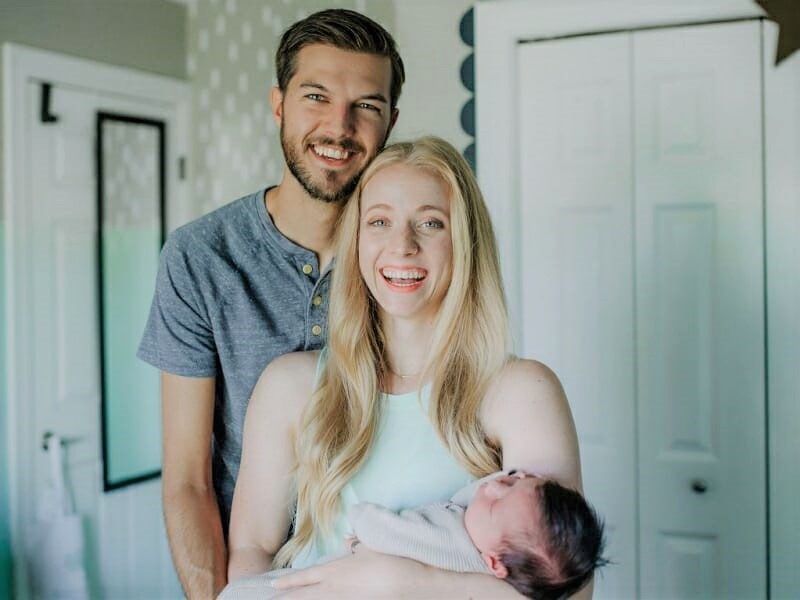 Paul and Alli Nix are following the path of early Christians in caring for the most vulnerable.

With a beautiful four-week-old baby boy beside him in his wife’s arms, Paul Nix reflects on how their recent experiences have brought them to new levels of trust in God.

After a month of settling in to their new normal as a family of three, the Nixes recognize the growing bond with their son. At the same time, they understand there are no guarantees he will stay with them permanently. Infant adoptions in their state cannot be finalized until six months after placement.

When asked if they are comfortable sharing their story widely before permanency can be achieved, Paul doesn’t hesitate. “If something changes and he’s no longer in our home, that doesn’t change our trust in God, and this is still the journey we were asked to take.”

Paul’s wife, Alli, agrees. “I’m going to love him as fiercely as I can for as long as we have him.”

How did this young couple come to such a place of radical obedience and trust?

Paul and Alli recall how vulnerable children were placed on their hearts before they knew each other. Though neither came from environments where foster care and adoption was common, each knew when they married seven years ago it would be part of their story. Still, they assumed they would first have kids in the traditional way.

After trying to conceive for two years, they decided to pursue some basic testing and were diagnosed with unexplained infertility. During this time God began to convict them that they were treating foster care and adoption as a back-up plan or an add-on step to be pursued farther down the road.

It was around this time, in November of 2019, their church participated in Orphan Sunday. As a campus pastor at Ransom Church in South Dakota, Paul helped plan the service and deliver the message.

He describes the planning process as a spiritual wake-up call regarding the high value every Christian should place on caring for the vulnerable. He recalls how in the Roman empire early Christians were known to exhibit the first radical hallmarks of the way of Jesus, rescuing and caring for orphans others had left to die and with no societal protections.

The things Paul was learning then also gave language to and shined a light on a culture shift already happening in his church; a culture where everyone has a role to play in the care of the vulnerable. At one point in the service, he challenged his congregation. Some may have come to church knowing it was Orphan Sunday and thinking about what they were willing to do in caring for orphans and vulnerable children. But what if God was asking them to take a step of obedience on a whole new level?

What Paul didn’t anticipate was how God would speak to his wife through this challenge. She had walked into church feeling ready to take a step toward caring for the vulnerable through hosting children temporarily and walked out knowing they needed to take steps to adopt.

As Paul and Alli shared what God had been speaking to them individually, they got on the same page and began walking toward adoption. At each step, doors closed or opened, revealing what was next.

By October of 2020, their paperwork for an infant domestic adoption was completed and fundraising began. Alli said, “That was the part I was most afraid of. How are we going to pay for this? That was one of the coolest ways we saw God move.”

Paul and Alli applied and were awarded a matching grant through the Hephzibah62:4 Adoption Fund, a resource helping to make adoption affordable for families in The Wesleyan Church. Paul talks about how the matching grant provided an opportunity for people in their lives to support them generously. As their community learned about their funding needs, they were blown away by how many were led to give. By January of 2021, their adoption expenses were fully funded!

The next test of trust was in the waiting and preparing to be matched with a birth mother. A conference they attended provided a meaningful experience, helping shape their attitudes toward birth families. The Nixes gained perspective on how to pray, support and love them well by shifting the focus from themselves to the birth family.

The call every adoptive family waits for came in May of 2021. A couple exploring placement for adoption wanted to meet them.

Alli acknowledged the unique, and admittedly awkward, circumstances of the relationship. But as they spent more time together, it became more and more natural. Soon the decision solidified for Paul and Alli to become the baby’s adoptive parents.

At the hospital, Paul and Alli were invited to stay close outside the birthing room. Alli describes with fresh emotion the surreal experience, processing the joy and the grief adoption naturally brings. The complexities of this experience deepened Paul and Alli’s appreciation for the birth parents and the sacrifice they were making.

Once their precious baby boy was born, hospital staff presented him to Paul and Alli and escorted them to their own room to care for him. They had anticipated this tender moment, wondering whether it would feel like he was their baby or not. Their honest answer about that time is both yes and no. They describe the intense emotional experience like a wedding and a funeral happening simultaneously.

As Paul and Alli savor their first weeks as parents and prepare for their third Orphan Sunday at Ransom Church, they anticipate how they will share their adoption testimony. They are hopeful for a finalized adoption and a healthy relationship with the birth parents that includes in-person visits. But they acknowledge the process isn’t over, and much of their story has yet to be written.

Several things become abundantly clear while listening to Paul and Alli’s story. Ongoing trust in God has become their story’s central theme. They harbor no regrets. Regardless of the outcome, they are confident God is continuing to use their experiences to make himself known and help shape them into the disciples he has called them to be.

On November 7, 2021, Christians worldwide will be celebrating 20 years of standing with orphans and vulnerable children through Orphan and Stand Sunday. Stand Sunday is an alternate branding of Orphan Sunday, with a specific focus on children in the U.S. foster care system. Click here for more information and to learn how your local church can get involved.

Jodi Lewis serves as the director of Hephzibah62:4, a subsidiary of The Wesleyan Church dedicated to equipping and mobilizing local Wesleyan churches to transform the lives of vulnerable children.