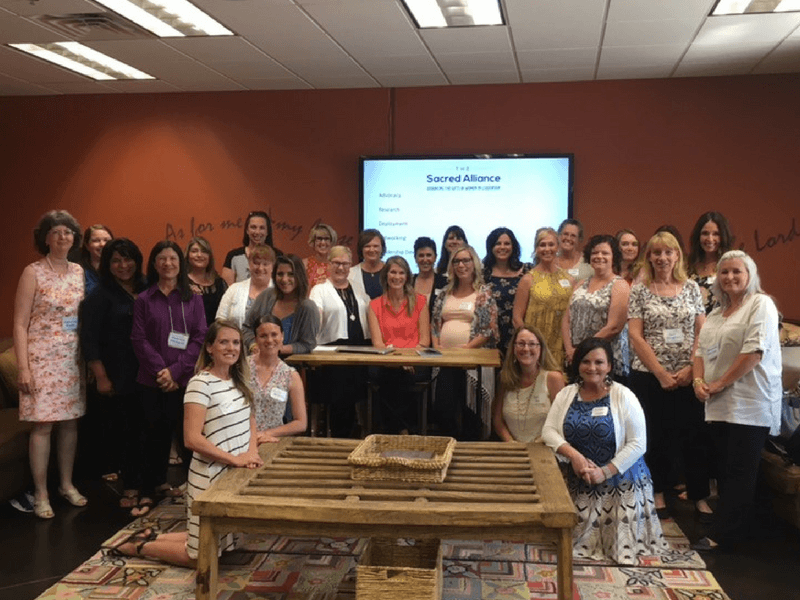 The Pacific Southwest District event for women in ministry is designed to encourage and support the pastors through sharing experiences and deepening relationships.

United by God’s call, a ministry vocation and gender, a group of nearly 40 Pacific Southwest District women clergy gathered to celebrate and strengthen their sacred alliance.

Rev. Sharon Westfall led the meeting called the Pacific Southwest Women Clergy Gathering, which is designed to encourage and support women in ministry through sharing experiences and deepening relationships. This year’s event, the third annual gathering, included a session dedicated to equipping women on how they can best respond when faced with ministry barriers. Ordained, licensed and commissioned ministers, as well as ministerial students, participated. Dr. Phil Stevenson, district superintendent of the Pacific Southwest District, spoke briefly to participants, encouraging them to keep having an impact in God’s kingdom.

“We need to do all we can to encourage women in their ministry call,” said Stevenson. “Women are an untapped resource in kingdom work. It is imperative that each woman, called into ministry, should be encouraged to maximize potential. More women can lead churches than think they can. We need to lift the lid off of the perspective that women can only serve in a support role. We ought to empower and encourage them to consider lead pastor ministry.”

Attendees formed small groups to discuss ministry scenarios that might be discouraging for female pastors offering suggestions on how to best respond to them. One example of a ministry barrier that women may face is individuals who believe it’s sinful for women to teach or preach to men. There were many other examples shared and discussed.

Westfall, who most recently, with her husband, was a volunteer assistant co-pastor at Sweetwater Community Church in Bonita, California, is a champion for women in ministry.

“I have always had a heart for clergy women and have supported many of my friends as they headed toward ordination before I became ordained,” said Westfall, who became ordained in 2009. “I served on The Wesleyan Church Task Force for Women in the Ministry many years ago as we tried to find ways to support and advocate for women in ministry.”

The importance of women flourishing in ministry within The Wesleyan Church is vital to the movement’s continuing to have a transforming presence across the globe.

General Superintendent of The Wesleyan Church Wayne Schmidt consistently says, “We’ll never experience a movement of God without both women and men fully expressing all the gifts God has entrusted to them.”

“Closing the gospel gap in our generation requires a kingdom force, including both women and men,” said Rev. Anita Eastlack, executive director of Church Multiplication and Discipleship for The Wesleyan Church. “Jesus’ Great Commission is for the whole priesthood of believers, everyone being sent out to make disciples in every ZIP code.”