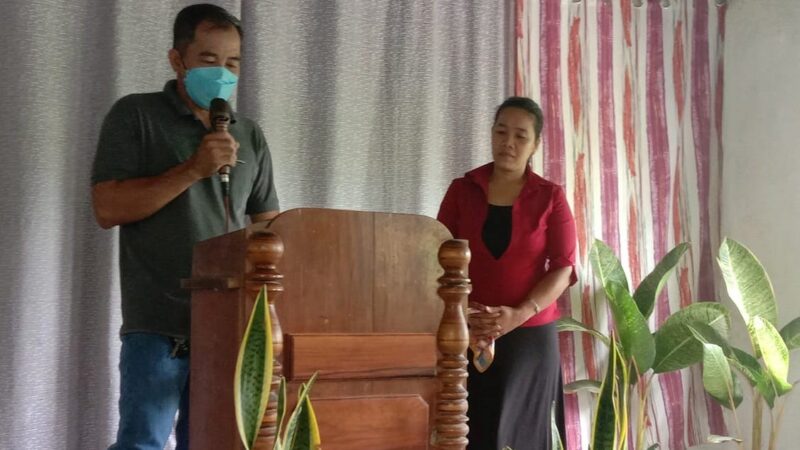 Rev. Juanita has jumped right into the role, ministering to her own family, churches, pastors and members. She said she has already traveled for visitations in local churches and feels the great responsibility that God has entrusted to her – yet, she said she knows that God is greater than her responsibility.

Raised by Christian parents who were devoted church members of the Wesleyan church, Rev. Juanita was blessed to grow up in a faith-based home. In addition to the influence of her parents, she was also discipled by Pastor Lolita Ibarrah, the pastor of her home church, who led her to receive the Lord during a church revival.

“I repented, and by faith I received Jesus as my personal Lord and Savior,” Juanita said.

After receiving the Lord as her personal Savior, Rev. Juanita was also ministered to by Pastor Peter Serna, who encouraged her to attend Bible school. Juanita went on to study at Philippine Wesleyan Bible College Kabacan to study Theology for four years and worked as a field trainee for one year.

During her time as the District Superintendent, Rev. Juanita said she hopes to oversee spiritual growth of the entire Northern Mindanao District and statistical growth of the church. Additionally, she hopes for evangelism and discipleship, more people getting to know Christ, a maintenance of strong relationships through fellowship activities and to resume the unfinished building of the district parsonage/district headquarters.

She said she also hopes to see “growth of the district in all aspects for God’s glory – spiritually, statistically, financially and physically.”

“Through God’s help, I can encourage more leaders/pastors and members by teaching them to continue, and to always align themselves to the ministry of the Great Commission,” she wrote. “To challenge them to be closer and more in love with God, because that is actually our first priority in life and ministry.”

“Now that I’m taking this role of what my husband did for many years, I’ve come to realize how it feels to be a leader,” she said. “I can relate to him, while doing this role.”

Becoming the first female appointed as a District Superintendent in the Philippines General Conference came as a bit of a surprise to Rev. Juanita. She said it was unexpected and rather emotional.

“For two nights I didn’t get enough sleep, I was thinking of what and how to even do it, but I was so blessed because not everyone will be given this opportunity. And I know that God is the one who put me in this position,” she said. “The Lord reminded me again and reassured me of His promises: ‘Do not be afraid or terrified because of them, for the Lord your God goes with you,’ ‘He will never leave you nor forsake you.’”

Rev. Juanita said that it is important to have female leadership present.

“If God calls a person in that position whether a male or female, both can be used where the Lord will place them,” she said.

Although Rev. Juanita said she doesn’t necessarily hope to be elected, she said that as someone who is called by God, she has learned to submit to whatever is His plan: “Not my will, but Thy will be done.”

Heather Auker is the communications supervisor for Global Partners.

*Rev. Juanita would like to extend her thanks to the following people: Global Partners, Heather Auker, Rev. Aldean Pablo, Rev. Silver Lumahan, the Northern Mindanao District, Director of Missions of The Wesleyan Church of the Philippines, friends and all Wesleyan Pastors, members, brothers and sisters in the Lord.