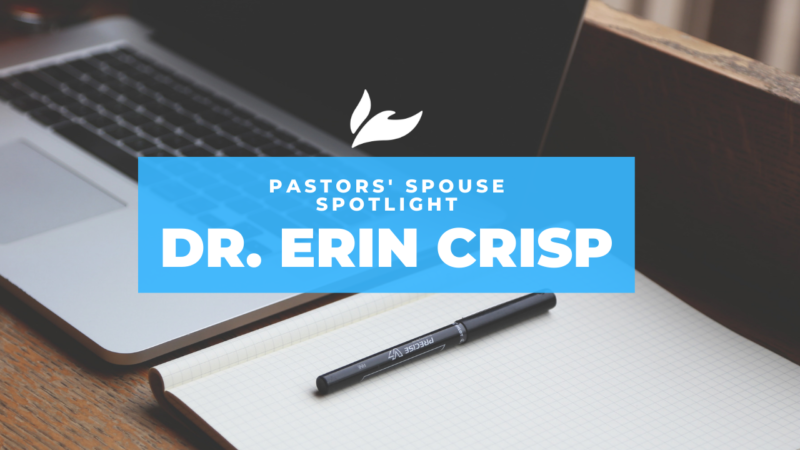 If there’s one overarching aim Crisp has developed in 19 years as a pastor’s spouse, it’s authenticity – for her family life and her own spiritual development.

It’s a Tuesday evening in September. Eric and Erin Crisp have carved out a few hours of spare time amid the busyness of two careers and parenting three high school boys to take a moment for themselves. What do they choose to spend it on? A lecture on spirituality.

“In a husband-wife relationship, how common would it be that both spouses are equally interested in going to a lecture on spiritual practices in their free time?” Erin Crisp laughed.

Eric, a pastor at College Wesleyan Church, and Erin, the executive director of Indiana Wesleyan University’s (IWU) Center for Learning and Innovation, had been looking forward to the campus visit by “Sacred Rhythms” author Ruth Haley Barton with equal anticipation. Both left the lecture that night with an extra boost of inspiration for their careers.

Erin has been a pastor’s spouse for 19 years. During most of those years, Crisp was pursuing degrees in higher education, eventually achieving her doctorate in educational technology and securing a job at IWU. Involvement in the ministry at the church where her husband pastored was always important to her, but no more than it should be for any lay volunteer.

Setting boundaries as a pastor’s spouse required intentional communication. Crisp said her husband made it clear from the beginning of his relationship with each church that the position he was being considered for was about him, not his wife. And, he made clear to his wife that he had no expectations for her involvement in the church.

“He’s always been clear with me and with congregations. If in interviews, the church staff began asking about his wife’s role, he’d tell them to talk to me directly,” Erin Crisp said.

Addressing expectations from the beginning freed Crisp to engage authentically in the church and build healthy relationships.

“It was a good starting place, on level ground. Because of that, I feel like I’ve had very positive interactions in the churches we’ve attended,” Crisp said, noting that she choose to be involved in certain ministries because they were the things she was genuinely interested in.

With a career that puts her in the leadership seat full-time, Crisp prefers her church life to be about being part of the community. “That seems like it’s been a good balance for me,” she said.

Crisp also tries to coordinate her activities at the church with times her husband and children will also be there. Erin works full time Monday through Friday, while Eric is often working on weeknights and weekends. She has had to manage her career life to be available in the evenings to take care of her sons, while Eric has the flexibility to manage daytime needs that may arise.

“In different seasons of our lives, scheduling has been a nightmare,” Crisp said. In recent years, she, her husband and sons have found a solution for maximizing family time, however.

“Every Sunday night after church activities are done, we get together and talk through our schedule for the week – who has what, when. We are all a lot happier when we coordinate, so that we can be home together,” she explained.

Of course, it helps that Crisp and her husband share similar interests, like the Barton lecture. Crisp said it’s a nearly daily occurrence that something in their careers provides inspiration for the other.

Crisp’s passion is to help students develop their spiritual lives. Her husband is undertaking the same task, albeit with a different demographic through a different means.

“Our conversations are often overlapping,” she said, explaining that on topics of spiritual practices, for example, “he’s applying it as a pastor, and I’m applying it in an educational setting.”

Crisp has been particularly inspired by her husband’s involvement in the recovery community, working with people recently released from prison or recovering from additions.

“Being around people in recovery is very inspirational for creating educational opportunities,” she said, explaining that those recovering from addictions or incarceration have renewed hope for the future and are thankful for opportunities to improve their lives.

“Education is fundamental to helping them reach those dreams,” she explained. “Eric’s work in that area has inspired what I do.”

If there’s one overarching aim Crisp has developed in 19 years as a pastor’s spouse, it’s authenticity – for her family life and her own spiritual development.

“It is really important to own your spiritual development and not let it be something you do because of others’ expectations; to be truly authentic in your family life and parenting, not just do it because of being the pastor’s family,” she said.

Acting in line with God’s calling “is not a ‘should’ or an ‘ought’ – it comes from an overflow,” Crisp said.

Crisp checks her motives continually, asking what God is actually calling her to do.