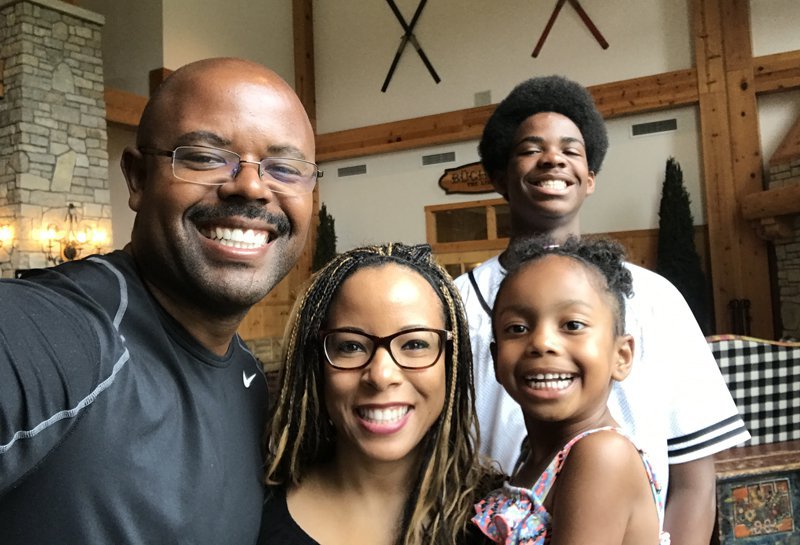 A little girl's desire to change her skin color is taking a Wesleyan pastor and his family on a journey they never expected.

“I think God ran out of white, so that’s why he made me brown. I wish that I was white.”

I will never forget those words spoken earlier this year by a little 4-year-old girl who has stolen our hearts. As I read about the sad events in Virginia on August 11 and 12, her words came to the forefront of my mind.

My wife and I are now legal guardians for this sweet 4-year-old, but we have known her since she was a baby. I baptized her mother while she was in the womb. We dedicated her to the Lord at Kentwood Community Church when she was born. I would get a big hug from her each week when her momma brought her to church. Then after her mom got into some trouble with the law, I was grateful that a more seasoned couple in our church stepped up to be her legal guardians.

So, I still got my hug each week. I knew this couple was praying that we would consider adopting the little one, but we had been down that road before and felt like we had already earned our stripes.

What changed? The woman who had become one of the legal guardians told me that the little one was starting to say that she didn’t like her skin color and she wished she was white. Her guardians happened to be white, but I know they were loving her unconditionally, so I knew she wasn’t getting this idea from them.

Of course, I didn’t have to ask where she was getting this idea from because I already knew. There is a pervasive sense of self-hatred related to skin color that begins to permeate the psyche of little brown-skinned people in our culture at an early age. Unfortunately, due to our nation’s history, little ones can begin to sense it even if they are not taught it. I knew that no one was teaching her she was inferior, but she was already feeling it for some reason. So, we offered to have lunch with the 4-year-old and her guardians after a worship service one weekend.

I will never forget that lunch. When we finished eating, the 4-year-old was staring at my wife across our dining room table. She said, “You’re white.” My wife responded, “No, I’m black. My skin is brown just like yours.” Then, the little one looked at me and said, “He’s darker.” I said, “Yes, I am. I am brown, too, but just a little darker.” Then, she looked at our 17-year-old and said, “He’s darker than you.” Then, she uttered the words quoted earlier: “I think God ran out of white, so that’s why he made me brown. I wish that I was white.”

We had not been discussing race over lunch. We were not the first African-American couple she had been around. She has seen me preach to her most weekends in our multiethnic congregation. Even though her guardians were white, she has seen an African-American male in a leadership role in her life as I get to stand up and remind her and many others each weekend about the things Jesus taught us and the ways we are supposed to love all people and pursue justice for all people. Yet, somehow, she didn’t love her own skin color. So, we proposed a solution to her. We said, “You know what? We like being brown. We think God knew what he was doing. Maybe we just need to introduce you to some really cool brown people.” Her response in an enthusiastic 4-year-old voice was, “Okay!” She was excited about the possibility.

From that point forward, we decided we would be more intentional about spending time with her, and very quickly, she captured our hearts. We went from feeling like we were never bringing any more children into our home to saying, “Yes, Lord. We will care for this little one in whatever ways you want us to for the rest of her life.” We became her guardians about a month ago. Adoption is uncertain at this point, not because we are unwilling, but simply because the layers of brokenness in her mom’s life are complicated along with the systems working with her mom on consequences. There are some things that are certain though: God made this little girl in his image. We never want her to feel inferior or as if she is unworthy of unconditional love. We want her to love herself so that no one will ever be able to make her question her value simply because of her skin color. We want her to know her primary identity is rooted in Christ, and her skin tone is not a mistake.

So, when I look at the headlines of what happened in Virginia, I am frustrated that there are people who want little brown-skinned children to feel inferior or unworthy simply because of their skin color. There is only one race. It is the human race. However, there ARE multiple ethnicities, and God loves them all. That’s why we don’t run around saying, “Let’s all just be color blind.” Instead, we should say, “Let’s celebrate and appreciate the variety of displays of God’s creativity.”

I am sad for the people who were injured and killed in Virginia. I am sad for the people so caught up in the sin of personal or systemic racism that they can’t see their own blind spots. I am praying for all involved, including leaders who set the tone in the areas where they have influence. Also, I am grateful I get to serve as one of the pastors of a group of people who deeply want to walk together in multiethnic unity that crosses generational and socioeconomic lines.

I am grateful folks at Kentwood Community Church know the deepest issues are sin issues that can only be transformed by a vibrant relationship with Jesus. I am grateful the little 4-year-old who is changing our lives will grow up in a setting where she learns to love everyone while being comfortable in her own skin. I continue to lift our nation in prayer, and I am thankful for the many voices who spoke up to condemn the hatred, bias and/or insensitivity that undergirded that rally in Virginia.

Lord, we know that you can make all things new. We are asking you to heal our land and show us what part we need to play.