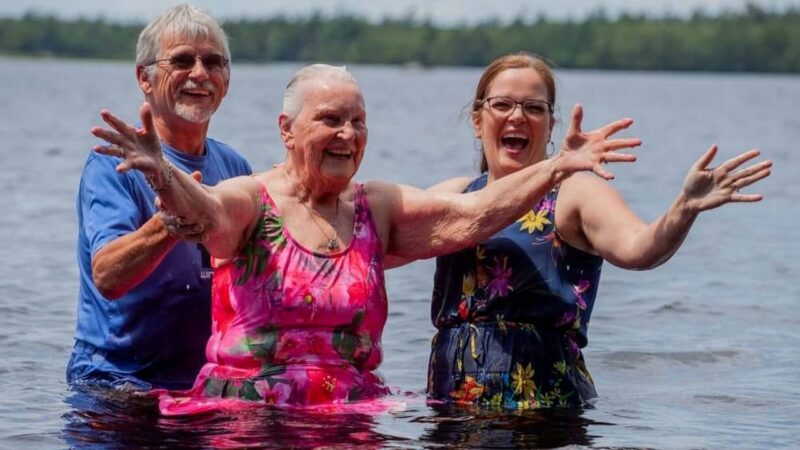 Everyone needs a "Vivian."

This year, July 17 was a day like no other at Hope Shelburne Wesleyan in Shelburne, Nova Scotia. That was when Pastor Joanne Ozon baptized five people ranging in age from eight to 88 in Lake George.

When you live in Nova Scotia and you don’t have a baptistry in your church, you must be strategic in finding that small seasonal window in which you can baptize outdoors in the lake. Pastor Joanne chose July 17, told her congregation about the opportunity to be baptized, and the first person to emphatically respond “sign me up” was an 88-year-old member named Vivian.

Vivian’s story is familiar. She gave her heart to Christ at an early age but walked away from her faith. Even though she had been following Christ and serving in the church for quite a while, when she heard Pastor Joanne’s invitation, Vivian felt compelled to jump in with both feet, so to speak, to make a public testimony of her faith.

“I don’t think I’ve ever baptized anyone before who came up out of the water with both hands raised in the air,” said Pastor Joanne. “But she did! She has so much energy. And she’s so humble and gracious, I just love her. Everyone needs a ‘Vivian’ in their lives!”

And there seems to be no regrets by Vivian in making the public statement. “She’s still talking about it, and she’s glad she did it.” In fact, the only person who was hesitant about it was Pastor Joanne, but not for any spiritual reason. “I have spinal cancer and I’ve had spinal surgery. I was worried, ‘what if I can’t get her back’? But it was fine, I had no problems.” Pastor Joanne jokingly adds, “The little ones are the hardest, because you have to push ‘em under, right?” They don’t just go under on their own.”

Despite her age, Vivian is very involved in church activities. Hope Church recently took part in a community event called Illuminate, which in the U.S. is known as Night to Shine, a ministry for people with special needs, organized by the Tim Tebow Foundation. There were 60 people with special needs and 200 volunteers, and Vivian stayed from beginning to end as a volunteer.

One could say that Vivian is a symbol of the very rebirth seen at Hope. The church was closed for four years and reopened in October 2015 by an older pastor who hired Joanne as an assistant pastor in July 2017. She eventually became the lead pastor and the number of worshippers has grown from 12 to 80. “We actually grew during the pandemic, which helped us rather than hurt us because we were all online. Once we reopened, people came to check us out.”

Pastor Joanne, who has had to preach from a wheelchair during this season due to her spinal surgery, is also a joyous person. She is doing well, has completed her last round of chemo, and is looking forward to participating in serving the community in October for Love Week.

Love Week is an organized event in which churches from various denominations go out and serve the needs of the community, whether it be help with yardwork, picking up trash, mowing lawns, chopping wood, feeding people, whatever someone needs.

No doubt Vivian will be found among Hope’s volunteers that week.