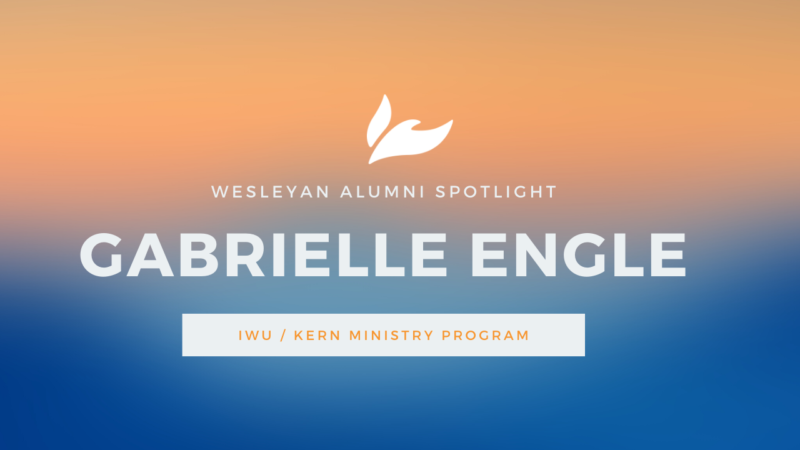 “The church of the future is going to have to simplify. We’re not going to be able to rely on giving as much to support a staff of 15 pastors. We’re going to have to know what we are about – preaching and teaching the word of God, inviting everyone..

It started with a 7-by-4-foot wooden table with bench seats placed in the middle of a neighborhood in Benton Harbor, Michigan, by an ordained pastor who worked at an outdoor gear shop. On summer days, girls and boys filled the benches to eat grilled hot dogs and mothers stopped by to collect some produce from the garden nearby. The table drew out conversations about radishes and racism, poverty and parenting. Can you see the church here?

The table was built by Gabrielle Engle, a graduate of Indiana Wesleyan University’s first Kern cohort, who moved to Benton Harbor three and a half years ago and joined the staff of Overflow Church and Mosaic Christian Community Association (MCCA).

Engle chose Benton Harbor because of its racial and economic divides. She wanted to listen and learn. She was eager to put her energy toward seeking racial justice and wholeness for the city of 10,000, most of whom were African American and who earned wages markedly lower than their white neighbors in St. Joseph.

However, three years in to full-time ministry, Engle had little spare time for listening and learning. Despite buying and fixing up a house in Benton Harbor, she wasn’t really part of the neighborhood.

“I realized I was missing my neighbors and the people coming and going around me. There were so many people next door to me that I missed because I was so busy ‘doing ministry,’” she said.

Engle longed to see a new embodiment of the church deeply involved in and committed to the community. She began to dream of a putting a table in her front yard where her neighbors could gather. In February, she decided to leave her positions at Overflow and MCCA and she found a job at an outdoor gear shop. She and her friends built the table and began inviting neighbors and friends over for casual meals.

Engle and her friends had no programs or conversation starters in mind for the meals around the table. But as the wooden benches filled, conversations about embedded racism and justice naturally began to unfold.

“It’s been healing for me, as someone who cares about creating systems and processes, to see that sometimes we just have to show up. To me, that’s the call, that’s the Great Commission. To go is simply to turn around and see the person in front of you,” Engle explained.

Engle also began to work in a network of community gardens across Benton Harbor, which is a food desert, or an area with limited access to affordable and nutritious food.

“Almost all of the middle school girls I mentored in the past few years are already pre-diabetic,” she said. “I wanted to do something about changing the accessibility of food in a region that has some of the best soil in the nation, ironically.”

Engle serves on the local school board and was able to involve the city’s schoolchildren in planting the gardens. The produce harvested is distributed among the community, and some is eaten at community meals at the wooden table.

For Engle, satisfying physical hunger is a prerequisite for addressing spiritual hunger. “How can I feed someone the word of God but not feed their belly? I think sometimes feeding someone food is teaching them the gospel,” she explained.

Nine months into this new season of ministry, the question that prompted Engle to take a break from full-time pastoring persists: “How am I to engage in the church?” She says these months have brought new visions for the future of the church in a city like Benton Harbor.

“The church of the future is going to have to simplify. We’re not going to be able to rely on giving as much to support a staff of 15 pastors. We’re going to have to know what we are about – preaching and teaching the word of God, inviting everyone to the table for bread and wine, for baptism,” Engle said.

“I think that’s what a lot of people around us are looking for – simple. People don’t need a show. They don’t need more commitments or shallow small groups. They want community, which starts with your neighbors and investing in them,” she said.

So what does it look like to simplify the church?

Engle believes it starts with celebrating the expressions of the church that don’t look like what we would expect – “to celebrate a table in ‘the hood’ or the church working at a Wendy’s drive-through.”

It will require releasing our desire to put metrics on the ministry of the church – attendance numbers, baptism figures, tithes. “Metrics stunt us,” Engle said.

She is quick to say that she doesn’t have answers: “It’s all very messy. But we can’t just tell the end of our stories, that’s not testimony.”

“God is doing some deep work in me through stepping outside what could have been an easier path. I want that for more people,” Engle said.