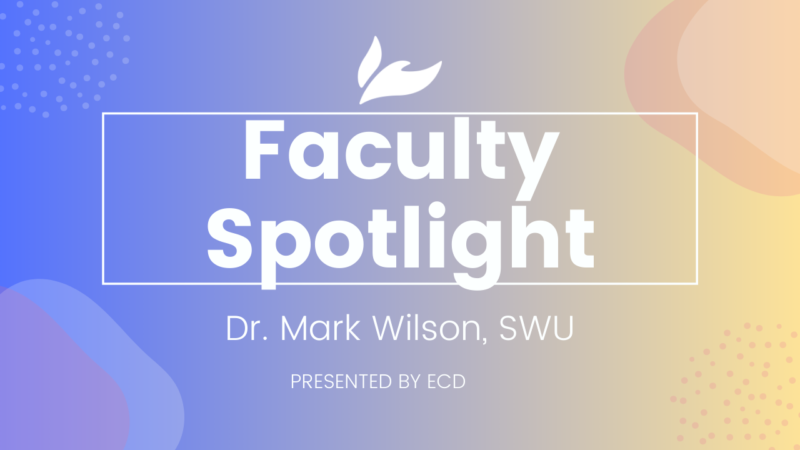 “A pastor cleverly disguised as a professor.” That’s how Rev. Mark Wilson refers to himself.

‘That they will see’: Rev. Mark Wilson

“A pastor cleverly disguised as a professor.” That’s how Rev. Mark Wilson refers to himself. Wilson began teaching at Southern Wesleyan University in 2017 after decades in pastoral ministry, the most recent in northern Wisconsin. Wilson said two things, other than the weather, prompted him to make the move 1,000 miles southeast to Central, South Carolina. First, after 26 years at Hayward Wesleyan, the church “needed a new vision, a new set of eyes.”

“Second, to teach was always something that was deep down inside of me,” Wilson said.

Offered a unique position by SWU President Todd Voss, Wilson was excited about the transition from pastoring to equipping future pastors.

SWU was particularly focused on raising up “apostolic multipliers, those who see new vision and want to bring about new things,” Wilson said.

Wilson and the faculty of SWU’s religion department began to dream up a new educational program based on the needs of the churches.

“Pastors we talked to said that young pastors coming out of college lack experience,” he said.

In response, Wilson and his colleagues birthed a new approach called 3-and-1. Students in the new program receive three years of on-campus instruction before being deployed to a residency for their final year. That fourth year gives students the opportunity to gain real-life, full-immersion ministry experience before they graduate.

“Our freshmen this year are the first ones who have that option,” Wilson said.

Helping students build relationships with churches across the country for their residencies is one of Wilson’s favorite parts of his new job, he said.

But even better than building those bridges, Wilson cites the transformation he’s seen of students in his classes.

When asked what course is his favorite to teach, Wilson replied: “It’s like asking which of my kids is my favorite. I love them all!”

He said general education courses and the major courses each have their own perks.

“In gen eds, I’ve seen people come to Christ and feel called into ministry, right there in class,” he said.

In his Basic Christian Beliefs class last fall, one student felt a call to ministry and switched her major that semester to youth ministry.  Wilson said the student, who is now the student body president, is one of the “sharpest students on campus.”

“On the other hand, it’s really exciting to pour into eager ministerial students, to be able to shape their imagination,” he added.

“I brought them in and interviewed them in the class. After class, one lady said she was wrestling with a call to missions and had prayed for God to give her a sign. That confirmed it,” he said, adding that the student spent the last summer serving in Haiti.

Wilson’s students describe him as a “mentor” who “teaches out of his passion.” The same could be said of his own mentors, who first inspired him as a student at Marion College, now Indiana Wesleyan University.

“Keith Drury and Bud Bence are on my short list of most influential people in my life,” Wilson said.

Now as a teacher, Wilson often thinks back to Drury and Bence’s teaching methods to find inspiration in his own classroom.

For his own students, Wilson’s prayer is for vision: “That they will see.”

“That’s vision; it’s not making up something, it’s just seeing.”