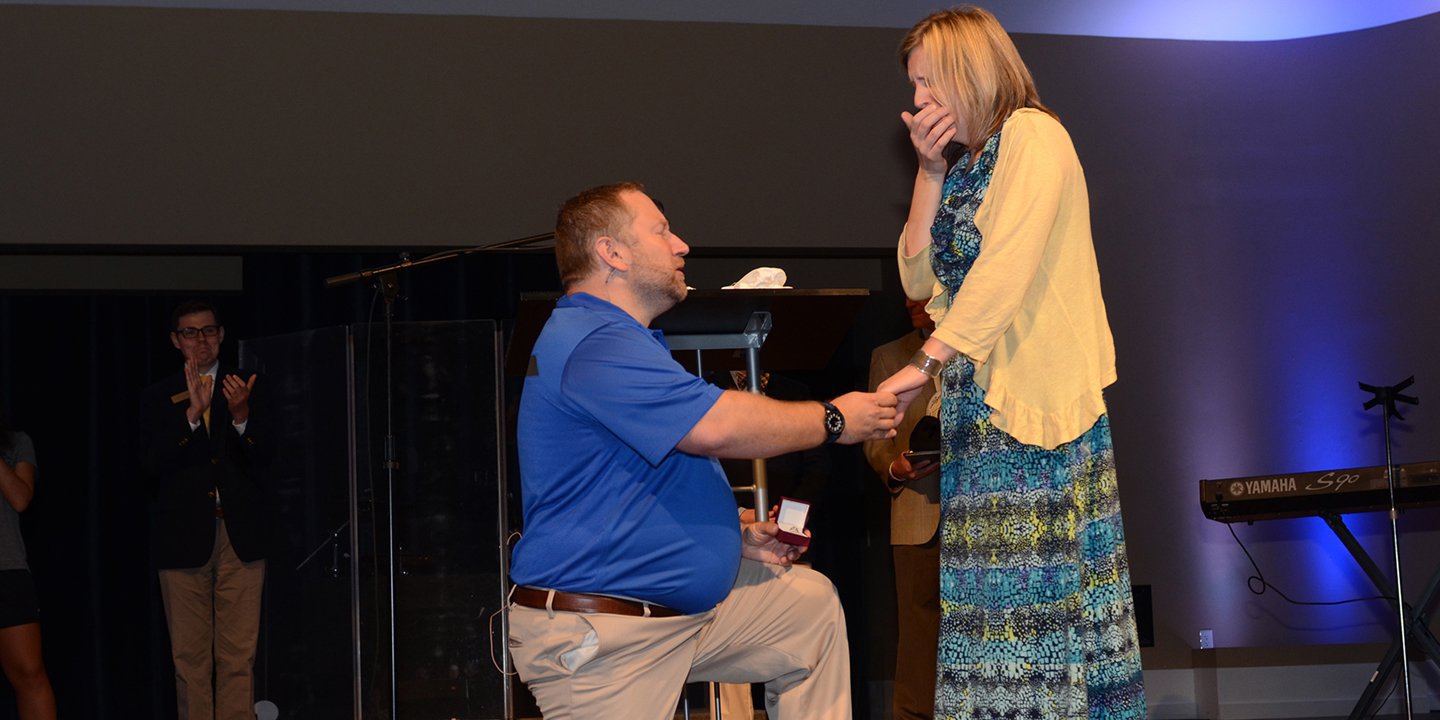 Karen Mullikin was presented multiple surprises during a recent trip back to her alma mater, including a gift from her husband, Rev. Heath Mullikin.

Rev. Heath Mullikin returned to his alma mater, Southern Wesleyan University, to give the chapel message September 21, but concluded his message in an unforgettable way.

Heath, who is currently pastor at Oakway United Wesleyan Church in Westminister, S.C., met his wife Karen while both were students at the university. An outstanding student who was always on the dean’s list and active in athletics, Karen worked hard with the goal of graduating a semester early. But on the week she was supposed to graduate, Karen’s grandfather died. Because of that, she was unable to attend commencement ceremonies and she didn’t get to hear her name called or walk across the stage and receive her diploma. Karen’s diploma was delivered to her home by a UPS truck.

Fast-forward 17 years to 2015. As Heath concluded his message in chapel about oneness in Christ, he called for Karen to come onto the stage, where Dr. Todd Voss, university president, presented her with a diploma cover to give her degree a deserving place of honor. Also in this cover was a letter from Voss, recognizing her dedication and service as a student:

“A lifetime of commitment and dedication. A lifetime of love and faithfulness. To each other, and also the Southern Wesleyan University. Today we celebrate these elements with you as we look to the circumstances that have led to this day, and the impact that you have had at SWU.”

Karen also received a servant’s towel, presented to all graduates at baccalaureate; a Bible from Southern Wesleyan’s Alumni Association; and a signed ball and jacket from the women’s soccer team, who recognized her role in making such a team a reality when she was a student.

But another special event was re-created, this time in style and with many witnesses.

On the weekend of Karen’s graduation, Heath, realizing that she would likely go home to New York and stay there, proposed to her and gave her a small engagement ring.

On stage at the close of chapel, Heath went down on one knee and presented Karen with a new ring, saying, “I want you to know I will love you with all of my heart and I will be there with you until I can be there no more.”

Karen, visibly moved, embraced Heath as their children and the chapel audience looked on.

Moved by the spirit of unity displayed in the auditorium and reflecting on his wife’s battle with Huntington’s Disease, a house fire, and their daughters’ recent serious jet-ski accident, Heath said “Being one is not always easy, and our life is not easy right now. We have issues, we have struggles all the time–nothing different than what you go through.”

“I think it was a great surprise to Karen and was so pleasing to Heath to see his school reach out to his family in this way,” said Rev. Ken Dill, university chaplain. “Heath and his wife Karen are both graduates of SWU and are great supporters of the university in their ministry.”