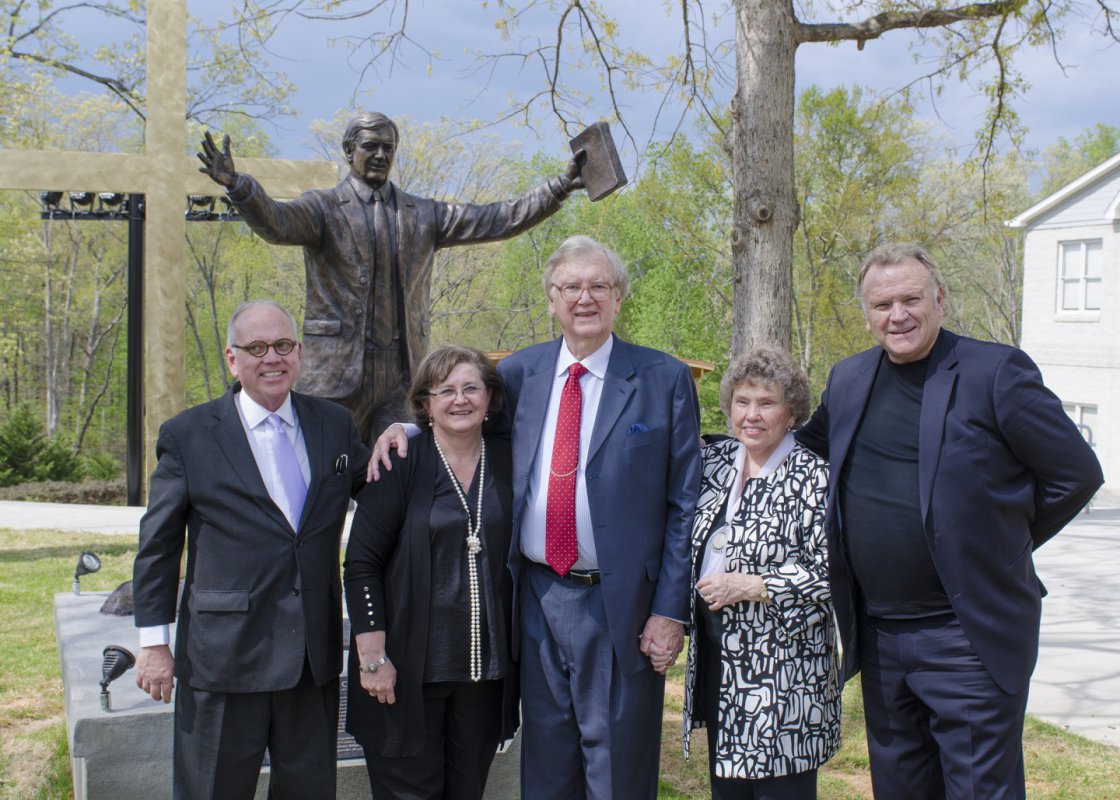 Dr. Clyde Dupin has been considered the “Billy Graham of Small Town U.S.A.” As his ministry grew, his impact reached worldwide, resulting in thousands of individuals making decisions to follow Christ.

The Clyde Dupin Celebration Amphitheater is the result of generous gifts and support from the Dupin family and friends. At its entrance stands a statue of Dupin, created by professional sculptor Dee Jay Bawden of Provo, Utah.

Dupin became a Christian at the age of nine and began preaching as a boy, beginning decades of evangelism that reached more than four million people in over 600 interdenominational crusades, revivals, and conventions. An ordained minister in The Wesleyan Church, Dupin pastored for 10 years and was an evangelist for 50 years. He produced a radio program heard by thousands and published a weekly column that appeared in more than 100 newspapers for 40 years.

Dupin received his ministerial training at United Wesleyan College, University of Evansville, and received an honorary doctorate of divinity from Southern Wesleyan. He married Grace Elizabeth Spencer in 1951. They had three children; Wesley, Kenneth and Joy. Both sons are pastors and each has a son who pastors.

“This is called Dupin Celebration Amphitheater for a reason because it’s what Clyde called his crusades. But more than that, it’s what our campus community will do every day they walk by this space reminding us that evangelism is our mission and celebrating lives won to Christ is our reward,” said Southern Wesleyan University President Dr. Todd Voss.

Ben Davis, SCDOT commissioner for the Third Congressional District and a former general board chairman of Clyde Dupin Ministries, said “When I met Clyde Dupin and talked to him, I realized that his total calling in life was to reach other people for Christ and that if he came he was going to reach out to people all over.” Davis recalled the effect of Dupin’s crusades on communities, with many individuals becoming Christians–several following God’s call into full-time ministry, and recalling how churches were brought together in those communities.

Pam Mangum of the Billy Graham Evangelistic Association, who became a Christian at one of Dupin’s crusades, said “My life is a part of the ripple effect of Dr. Dupin’s work as I carry out God’s mission for my life.” Mangum read a quote from Franklin Graham saying “Clyde Dupin was engaged in the most important work on Earth, proclaiming the gospel of Jesus Christ.”

Terry Woychowski, a Dupin supporter and former vice president of General Motors credited with the rollout of major SUV and truck brands, called attention to Dupin’s leadership–his wisdom, courage, and strength to endure as he traveled the world with the gospel.

“A leader indeed has a vision of a better way, but it requires wisdom to know how to go about that. Clyde had to dig deep to find strength day after day, crusade after crusade. This man was held up by family and friends, supporters, and men and women of faith to continue to pray and physically help him up, continuing to propel him into battle.”

Dupin expressed gratitude to Southern Wesleyan and to Dr. Voss, praising him for his love for God, love of people, and his vision for the university.

“I accept your honor only in the name of Jesus,” Dupin said. “What I am, I am by the grace of God.”

Referring to the statue erected at the amphitheater’s entrance following the ceremony, he said, “Don’t look at that man; look at the Bible in his hand.” Of the cross that stands behind Dupin’s sculpture, he said, “They’ll know that with the cross, there’s redemption and salvation.”

Dr. Charles Joiner, chairman of Southern Wesleyan’s board of trustees, led those assembled for the ceremony in a litany of dedication.

“At the crossroads of the campus it will stand as a testimony of God’s desire to bring the lost to faith and renewal to the believer,” said part of the litany.

Ken Dill, university chaplain and associate vice president for spiritual life, recalled the shared vision he had with Voss about a vacant space between Newton Hobson Chapel and Fine Arts Center and Nicholson-Mitchell Christian Ministry Center that was grown over with scrub trees, praying it would one day be a place where students would gather.

Located along Wesleyan Drive next to Newton Hobson Chapel and Fine Arts Center, the amphitheater will host outdoor concerts and become a centerpiece for a variety of events. The amphitheater is a testimony to Southern Wesleyan University’s faith-filled community. The contagious generosity that made this venue possible will also be of benefit to the surrounding community as Southern Wesleyan hosts outdoor events. 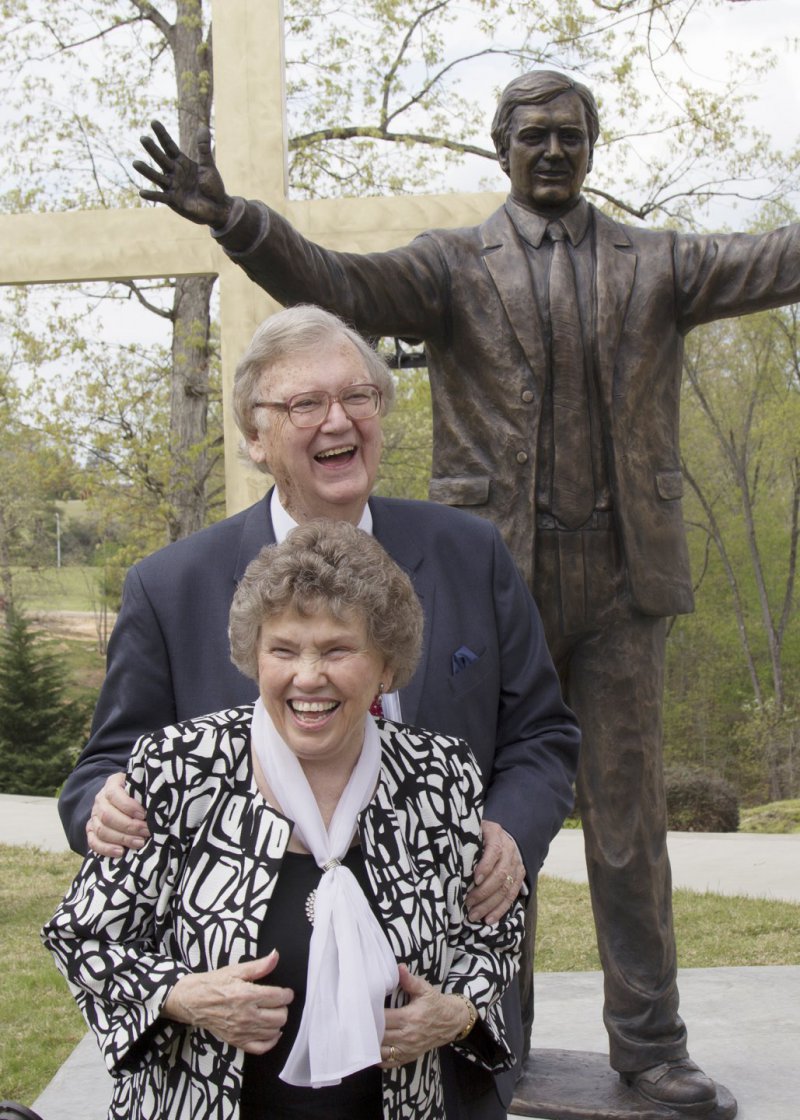 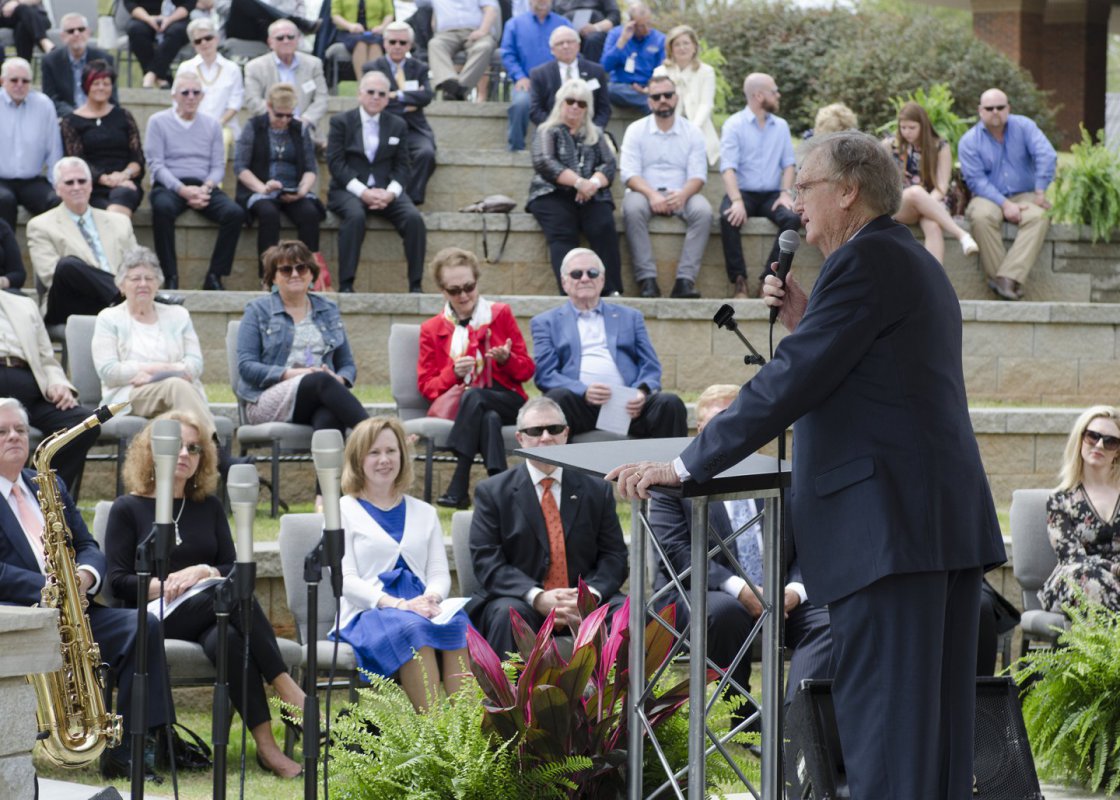