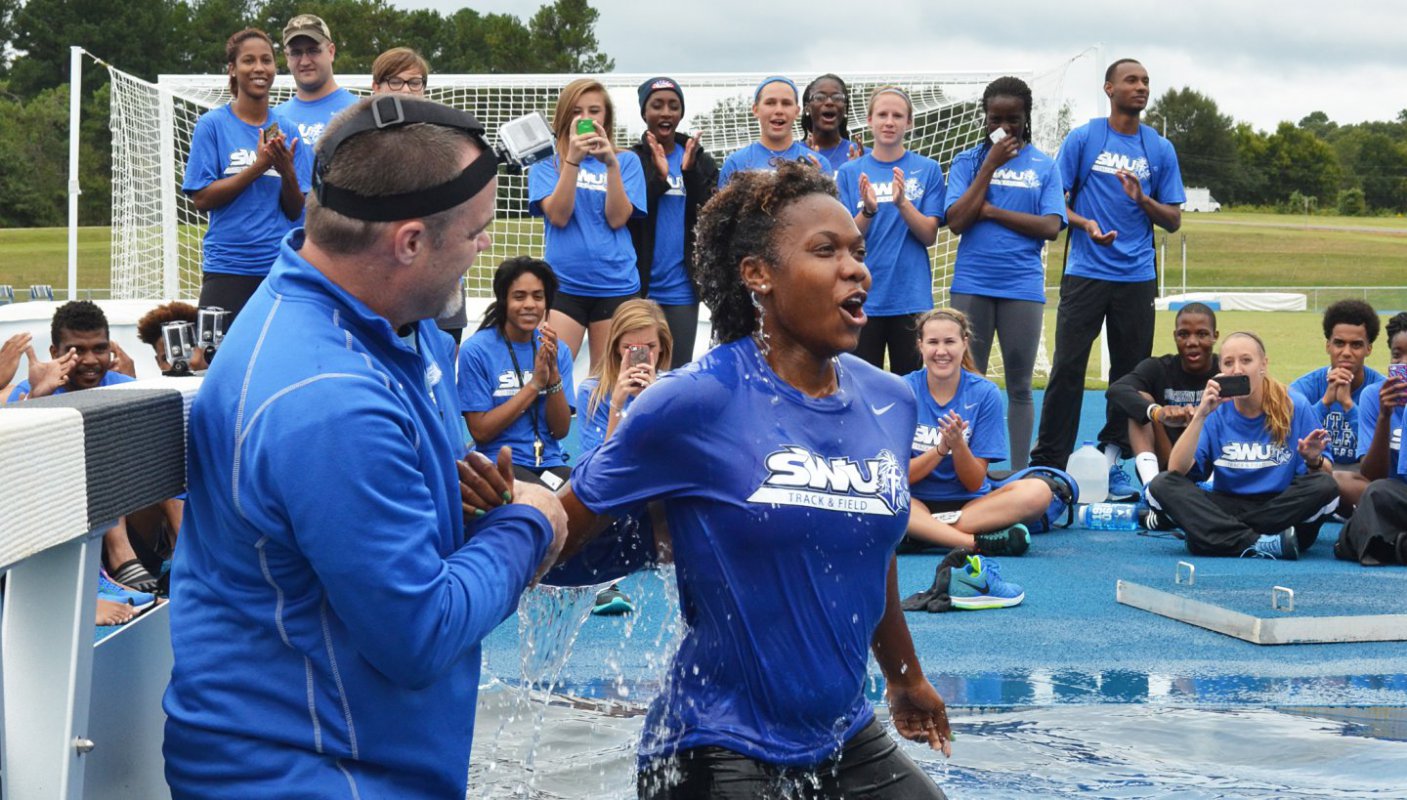 Two SWU coaches reflect on how revival is happening in the athletic department. One coach says he hasn't seen anything like it in his 28 years at the university.

Friday afternoon is a time when weekend plans dominate thought processes – football, dates, hanging out with friends and relaxing.

On the minds of many on Southern Wesleyan University’s Central campus was a celebration, but not a celebration of the week’s hard work winding down. Word was spreading about life-changing decisions being made by student-athletes who were reaching out to Christ as their savior. Just after 3 p.m., a group of student-athletes gathered on the “SWU Blue” track, locking arms and praying as students, faculty and staff made their way toward the track.

Rev. Tom Harding, pastor of ALIVE Wesleyan Church, a nearby congregation attended by many of Southern Wesleyan’s students, stepped into a steeplechase pit filled with water, and – one by one – baptized more than a dozen student-athletes wishing to make public their new found faith.

Harding commented that the baptisms are a “great symbol” of SWU’s desire to partner with local Wesleyan churches in caring for the student body and added that they brought together student-athletes of many teams as well as friends in a show of support.

Olivia Bush of Indian Rocks Beach, Fla., recalled a conversation with friend and classmate Krystal Pearce just before fall break last year. Pearce, a tennis recruit who worked out with the track athletes, said she had been praying that the Lord would bring the team closer together. On Oct. 3, 2013, Pearce was killed in an automobile accident as she was returning home to Delaware for fall break. Bush believes Pearce’s prayers are now being answered.

Charles Wimphrie, Southern Wesleyan’s head basketball coach, hasn’t seen anything like it in his 28 years at the university.

“These kids are making life-changing decisions that will give them a solid foundation for the rest of their lives,” he said.

Greg Thiel, head men’s and women’s track coach, leads a Bible study with student-athletes in the cafeteria. Thiel shared his story of running from the Lord when he was head track coach at the University of South Florida, then coming to a dramatic conversion experience. Thiel shared his own experience of the events that followed this experience and subsequent challenges he had with friends and family members who didn’t understand the change in his life.

Morgan Haney had come to Southern Wesleyan from Indiana planning to run track for the Warriors. Shortly after the start of Fall Semester, Theil invited her to a Bible study.

“I didn’t want to go at all. I ended up just stumbling into his office right when the Bible study was going on,” Haney said. She was unprepared for the tug on her heart and the subsequent experience she was eager to share with others.

“When (Thiel) asked me to pray out loud to God, it was like all chains being broken,” Haney said. “I poured out everything I had to him and I immediately felt free.”

Lavornne Taylor of Phenix City, Ala., said her life was like a roller-coaster. She was on medication to control her emotions. She told Thiel she felt bad and wanted to go home for a week. Thiel told Taylor that running from her problems wouldn’t help, and shared Bible verses with her.

“I just prayed for God to be in my life,” Taylor said, adding that, although she still has some problems she is better able to cope with them. She soon realized she no longer needed her medication and stopped taking it. “Everything is like different just because of that one simple prayer,” she said.

“When I was in that water, I didn’t even feel the coldness,” said Kayla Eison of Spartanburg. “All I heard was, ‘Forgiven, everything is gone.’ I made a list previously that day of everything that was eating me and at night, I burned that letter. I haven’t thought of it since.”

“I felt like I just needed (Christ) in my heart because I was distant from him,” said Kia Tillman of Anderson, grateful to Thiel for mentoring her and helping her find Christ.

“When I recruit athletes, I never ask them where they are at spiritually. I tell them what we’re about as a school. I tell them what I’m about,” said Thiel. “I’ve given my testimony to recruits a couple of times, but usually it’s about listening.”

Theil would tell his recruits, “I’m not worried about making you a better track athlete. I’m not asking you where you’re at, but I just want you to know all about relationships with Jesus. My dream and prayer is that you’ll have a strong relationship when you walk across that stage in four years.”