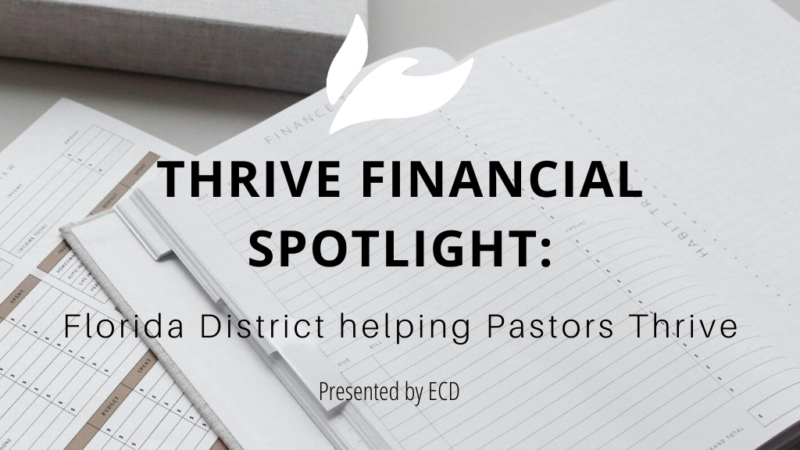 This role is important, because—according to Styers—the problem with executing clergy care is not a lack of concern, but a lack of time on the part of district leaders. “We try our very best to not let people fall through the cracks...

Healthy pastors are more effective in leading healthy churches. Florida District Superintendent Patrick Styers believes that at their best, denominations build in structures that make it possible for pastors to become healthier. That possibility emerges, in part, from a district’s ability to make clergy care a priority. Thrive Financial Initiative (TFI) is a core part of the Florida District’s approach to helping support clergy, and their efforts were elevated when Styers hired Todd Sloan—discipleship pastor at Fellowship Community Church in Spring Hill, Florida—in a dual role as Pastoral Care Consultant and Student Development Director.

This role is important, because—according to Styers—the problem with executing clergy care is not a lack of concern, but a lack of time on the part of district leaders. “We try our very best to not let people fall through the cracks; the district and denomination care—we all know the statistics about those who drop out of ministry,” he said. But because district superintendents oversee so many churches, pastors, and administrative details, support efforts can easily be overlooked in favor of other, more urgent tasks.

Sloan’s involvement with pastoral health includes his oversight of TFI; and in addition to TFI, the Florida District facilitates a retirement investment program, and a student debt pay-down program (both of which include financial incentives for participation). Their district is at the forefront of clergy health initiatives, partly because they have a structure in which someone (Sloan) is specifically charged with—and compensated for—building structures for helping clergy.

Thrive Financial Initiative has a unique place in that strategy for Sloan and Styers, as it helps clergy and laity work together toward health.

One of the foundational benefits of TFI is that both clergy and laity “have the verbiage to define what their situation actually is,” said Styers. “Often, this is why pastors stay away from talking about it in their churches, too, because they can’t talk about stewardship from a place where they are practicing it. We need pastors to know where they are. We require them to meet with a certified financial advisor often, in most of our programs, which can help make those changes more sustainable.”

For Styers and Sloan, the benefit of programs like TFI (and a focus on clergy health in general) is that pastors can stay more creative in ministry without the additional stress of financial hardship. The Florida District is reaping rewards from their investment, too: pastors are paying down student loans, eliminating thoughtless spending, and investing in retirement funds. And retirement is an especially important focus, as pastors often stay in ministry after their health or energy falter, simply because other options feel financially out of reach.

As Sloan and Styers continue to serve people, they emphasize the importance of community and intentional effort. ““It doesn’t happen by itself; even if it’s simple,” said Sloan. Like anything change in habits, financial health involves building a plan, realigning actions, and tracking results. TFI is powerful because it resources each part of that process.