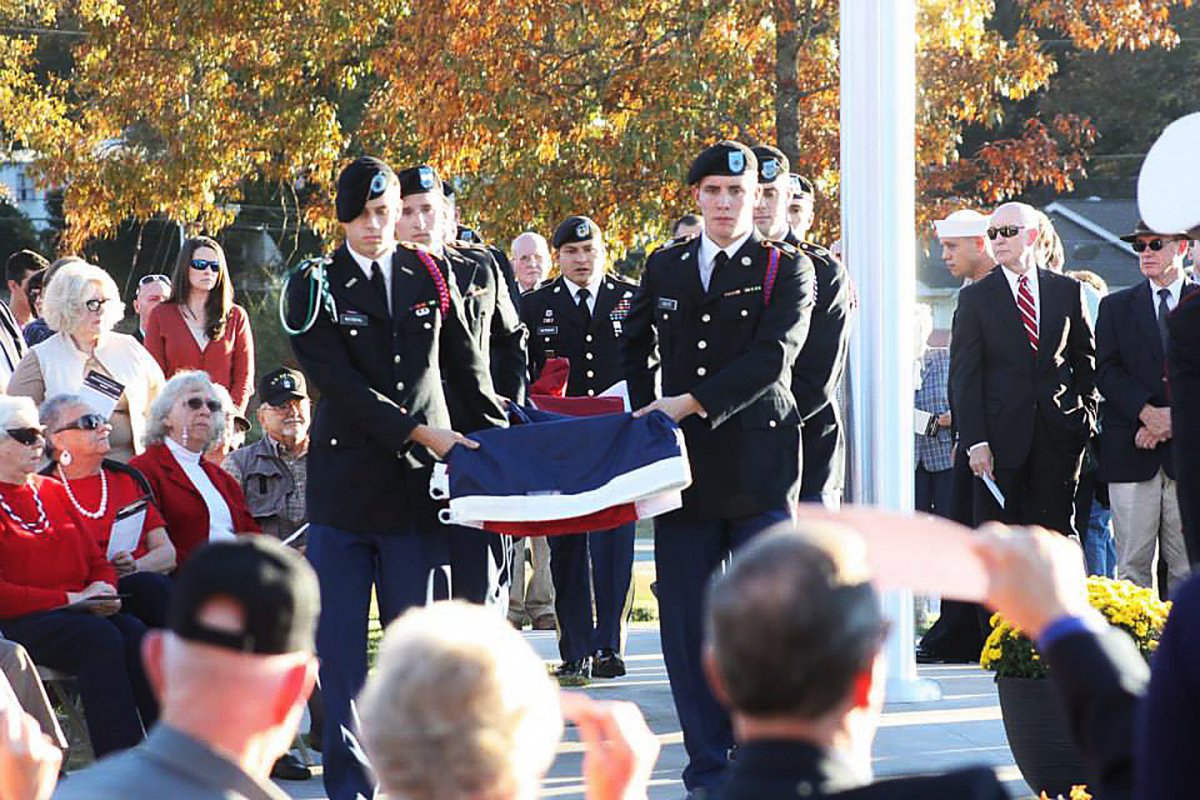 U.S. Senator Lindsay Graham and S.C. Lt. Gov. Yancey McGill assisted in dedicating a flag plaza honoring fallen soldiers on the SWU campus. Sen. Graham calls it one of the best memorials in the state.

What began as an effort to place flags at Southern Wesleyan University’s new athletic facilities grew into a tribute to those who have served and continue to serve in our military.

The plaza, located near the campus entrance in Central, S.C., was dedicated on Veterans Day to the late Col. Jimmy D. Sheriff and his widow, Gwen Anne Campbell Sheriff, and to the soldiers and spouses of the S.C. National Guard, Battery C, 2nd Battalion (AW) (SP) 263rd ADA.

Col. Sheriff served in the Clemson “Charlie Battery” from 1959-1977. Col. Sheriff graduated from SWU with an A.B. degree. Also a SWU graduate, Anne is a retired educator who founded the Faith Clayton Family Research Center at Southern Wesleyan.

“What started as a simple idea was transformed into a more than huge flag plaza, but also a prayer plaza as we celebrate our military, along with the religious liberty and freedom they have fought to keep,” said University President Todd Voss.

“This memorial today is one of the best in South Carolina,” said Graham, who was born and raised in Central. “Every person out here today has lost family members,” said McGill, noting relatives he lost to war.

Calling attention to members of the Clemson ROTC “Fightin’ Tigers” battalion who escorted the U.S. flag, Livingston said, “When you saw that flag come across here, it was very appropriate that it was carried by the future leaders of our military.”

Martin praised Voss for his vision for SWU and his desire to work with the town to achieve common goals.

“We celebrate this Plaza dedication but we celebrate so much more. These stones, bricks, concrete, seals, fountain, poles, bronze plaques, and flags mean more than the sum of their parts. They signify to all passersby ‘love, honor, reverence, respect, freedom, faith, perseverance, commitment, sacrifice, patriotism, adversity, and triumph.’ Thank you to Anne Sheriff and the 2nd Battalion of the Clemson National Guard for reminding us how special these enduring qualities are to our community,” said Dr. Lisa McWherter, vice president for advancement, in her welcome to guests. “In the words of Judge Darl Fowler, ‘To God be the glory!’”

Other highlights included The 282nd U.S. Army Brass Ensemble from Fort Jackson, the University Singers performing patriotic selections, and area Scouts leading in the Pledge of Allegiance. At the conclusion of the ceremony was a 21-gun salute from the Clemson ROTC Rifle Team followed by the playing of “Taps” by Sgt. Brent Watts of the U.S. Army, a 2009 SWU alumnus.

Many businesses and individuals shared in the vision to make the plaza a reality. Its centerpiece is a large U.S. flag, donated by Sam’s Club of Easley, who also donated the South Carolina flag. McKinney Dodge of Easley donated an 80-foot flag pole. Special appreciation goes to Walmart, Drs. Chuck and Betty Mealy, Mike Metz, and John Ross of Palmetto Insurance in Anderson. The Class of 1953 was also recognized for their donation toward additional poles, on which fly the South Carolina flag, Pickens County flag, Town of Central flag, the Christian flag, and the SWU flag.

A celebratory dinner was held after the dedication for dignitaries, donors and friends of the university. Anne Sheriff, Darl Fowler, Clary, Town of Central Administrator Phillip Mishoe and others addressed dinner guests.

The Veterans Day events were hosted by the office of advancement at Southern Wesleyan University.