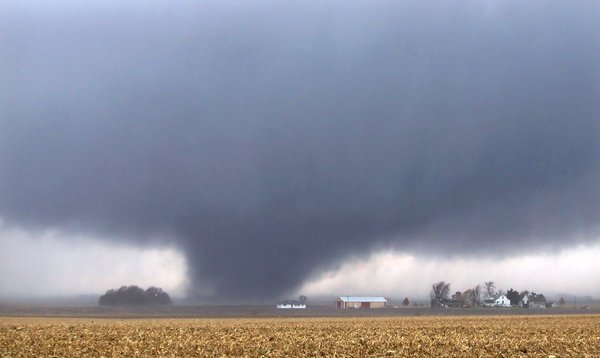 An onslaught of tornadoes barraged the Midwest on Sunday, November 17, killing eight people. The Wesleyan Church reports that the districts in the path of the storms have reported no injuries.

An onslaught of thunderstorms and tornadoes (nicknamed the “fall fury” by newscasts) barraged the Midwest on Sunday, November 17, killing eight people. The Wesleyan Church reports that the districts in the path of the storms have reported no injuries. Only a few instances of damage were reported by Wesleyan districts: a pastor’s home in Indiana Central District had roof damage from a large falling tree branch.

“While we are giving thanks that Wesleyan churches and people were largely spared, we are deeply concerned and praying for the families of the eight persons who were killed, as well as the many who suffered damage to their homes,” said Ron McClung, assistant general secretary for The Wesleyan Church.

According to media reports, the rash of at least 55 tornadoes on Sunday affected several states, causing 8 deaths and up to $1 billion in damage. In Washington, Illinois, alone, over one thousand homes were damaged or destroyed. Although extraordinary for November, this compares with nearly $4 billion damage that was caused by the tornadoes in Oklahoma in May, 2013.

Poured-Out Ministries is once again launching its efforts to help those who suffered damaged homes. The disaster and relief partner of The Wesleyan Church will travel to Washington, Illinois, and the surrounding area, where an EF4 tornado struck on November 17. Poured-Out is visiting the area to assess the damage and resources needed for residents.

As soon as Poured-Out has confirmation from its onsite team regarding damage and resource needs, more information will be communicated for those who would like to join volunteer teams to help the Washington community.

Visit the Poured-Out website or Facebook page for updates. You can also e-mail Illinois@poured-out.org for more information.