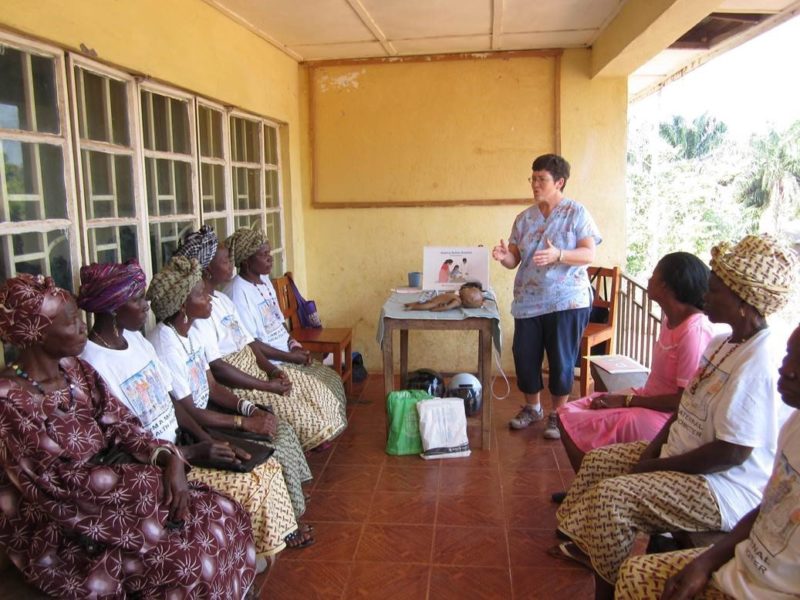 Sierra Leone has always held a special place in my heart. After the devastation left by Ebola throughout 2014 and most of 2015, I look forward to 2016 as a pivotal year of recovery for the country. Prior to the Ebola outbreak, the war-torn nation had made such great strides in its economy, job market, and infant and maternal mortality rate. Now, Sierra Leoneans have an opportunity to not only rebuild the country, but also resume its progress.

Carrie Jo Cain, a registered nurse who grew up in Sierra Leone, also believes that this year will play a major role in shaping the future of the country. As the program health director for World Hope International (WHI), a Christian relief and development organization working with vulnerable and exploited communities to alleviate poverty, suffering and injustice, she worked endlessly and tirelessly in the fight to stop Ebola and will play an instrumental role in helping the country in its recovery efforts.

She was recently announced as the winner of the prestigious Children’s Prize, an annual global competition seeking to fund the best and most effective child survival project proposing to save the greatest number of children’s lives. I had the privilege of interviewing Carrie Jo (CJ) about Sierra Leone, and wanted to share some highlights of our insightful discussion with all of you:

Jo Anne Lyon: Why do you think 2016 is a pivotal year for Sierra Leone?
CJ: This is the year that Sierra Leoneans can set the tone and set the stage for their recovery post-Ebola. Having just been officially declared Ebola-free in November 2015, 2016 will allow Sierra Leone to buckle down and focus on rebuilding their country in the aftermath of Ebola. They must also be ready for Ebola to re-emerge and know how to stop it by blocking transmission. Sierra Leoneans have to reach out and grab all of the wonderful opportunities that are coming their way to turn around negative situations and improve the country. They must remain passionate about their country and fight to rebuild it after such a devastating blow to their economy, healthcare and education systems, infrastructure and overall mental and physical well-being.

JAL: What do you think the country can do in 2016 to effectively rebuild itself after Ebola?
CJ: I think the most important thing the country can do to effectively rebuild itself this year is to build national pride and patriotism and keep passionate about recovery. It is definitely going to be an uphill battle but everyone needs to remain enthused and focused on improving the status quo. I also think another key factor is increasing the number of young scholars in Sierra Leone. Many young people leave the country to pursue an education, which is great, but then they do not return. It saddens me to see so many young, educated Sierra Leoneans not returning to their country to put their newfound knowledge into action. We need these young scholars to return to their country and help Sierra Leone rebuild itself post-Ebola.

JAL: What do you think will be the three main areas of focus for Sierra Leone in 2016?
CJ: We have to improve the healthcare system and that means not only through medical supplies and training, but also by providing basic sanitation and clean water. We have to improve education and get children – many of whom stopped attending during the Ebola outbreak – back in school and we have to improve communication. Without communication it is not possible for programs like Helping Babies Breathe to even get off of the ground. Unfortunately, these three areas took a hard hit during the Ebola outbreak and I strongly feel that these need to be and will be the main areas of focus in Sierra Leone this year.

JAL: Speaking of health care, it was announced in mid-December last year that you are the 2015 recipient of the Children’s Prize. Can you tell me about this?
CJ: Yes! As the Children’s Prize recipient, World Hope International will receive $250,000 in funding to implement the American Academy of Pediatrics’ Helping Babies Breathe (HBB) program to save an estimated 5,336 lives at birth in Sierra Leone over the course of two years.

Sierra Leone is ranked the worst country in the world for under-five mortality; nearly one out of every three Sierra Leonean children do not live to see their fifth birthday. Thirty percent of these deaths occur during the first day of life. The primary force driving this harrowing fact is simple: a lack of skilled attendants in delivery. In fact, 77 percent of rural deliveries in Sierra Leone occurred at home, with assistance from traditional birth attendants who are largely illiterate and have no formal training.

While the HBB program has already been implemented with success in 77 countries over the past four years, it was designed for use in health facilities. WHI’s plan is to expand the curriculum to include all those attending births in non-clinical settings, therefore improving survival conditions.

JAL: What is the HBB program?
CJ: HBB in Sierra Leone specifically is about preventing a potentially negative outcome from happening – the death of a newborn. It teaches rural healthcare professionals how to intervene when a baby is in distress and help it get its first breaths with low-tech intervention.

JAL: How will WHI leverage the funding they will receive from the Children’s Prize?
CJ: Great question. WHI will use the $250,000 in funding that they receive from the Children’s Prize to implement HBB in five districts in Sierra Leone in collaboration with local health ministries and UNICEF, which will save an estimated 5,336 lives at birth over the course of two years. Right now we are in the planning phases working to get the program off the ground and hopefully expand across the entire country.

In 2014, my team and I implemented a HBB pilot program in three chiefdoms in Sierra Leone leveraging private funds and church support. It was so well received and embraced by the community that we decided it would be a good idea to roll it out to other districts across Sierra Leone, which is what I will be focusing on over the next few months. During the pilot program, the trainees were so enthusiastic that they often sang songs of thankfulness at the close of the training – singing about how their babies would now have a better chance at life. This confirmed that what we were doing was special and inspired me to expand efforts to roll out training. The Sierra Leoneans, many of whom had walked 10 miles to participate in our training, were very appreciative of the fact that we were training them in their community, their setting, with a baby that looked like them.

JAL: Why is this program so close to your heart?
CJ: I have worked in the birthing setting for many years and have witnesses the impact of a well-trained team in saving the life of a new-born infant in distress. The methods in HBB are simple and the technology is easily used in the most rural setting by the least educated caregiver. I have observed many times over the death of infants because of no one being trained to intervene. We now finally have the opportunity to impact this on a large scale. Having grown up in Sierra Leone and feeling called into nursing from experiences volunteering alongside missionary nurses, I feel privileged to finally bring something so life-changing to a group of people so in need of this type of intervention.

JAL: Is there anything else you would like to share with readers?
CJ: It is a real privilege to be the Children’s Prize recipient and to work with World Hope International’s unique and passionate team. I am very excited about implementing HBB in Sierra Leone this year.

This article was originally published on Huffington Post on January 19, 2016. Read the original article.