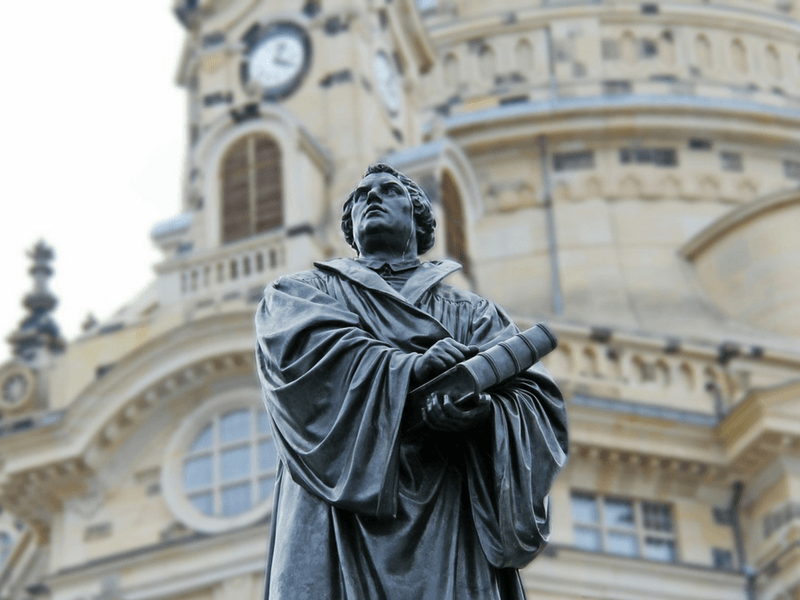 Martin Luther did not intend to start a movement away from the church of which he was a part. His intent was to reform, to change. His efforts were met with resistance. Instead of reforming, the church excommunicated Luther. Standing before an official body of the church in the city of Worms, he was ordered to recant. He replied:

Unless I am convinced by the testimony of the Scriptures or by clear reason, . . . I am bound by the Scriptures I have quoted and my conscience is captive to the Word of God. I cannot and will not retract anything, since it is neither safe nor right to go against conscience. Here I stand. I cannot do otherwise. May God help me. Amen.

Since reform proved to be impossible due to the rigid stance of the church, he was forced out. He and his followers began the Protestant movement.

When Protestantism spread to England, it became known as the Anglican Church. John Wesley, a priest in the Anglican Church, came along 200 years after Martin Luther. Wesley struggled long and hard to be assured of his own salvation. On May 24, 1738, he had a life-changing experience. He later wrote in his journal:

In the evening I went very unwillingly to a society in Aldersgate-Street, where one was reading Luther’s preface to the Epistle to the Romans. About a quarter before nine, while he was describing the change which God works in the heart through faith in Christ, I felt my heart strangely warmed. I felt I did trust in Christ, Christ alone for salvation: And an assurance was given me, that he had taken away my sins, even mine, and saved me from the law of sin and death.

Wesley’s intent was not to start a new movement or a new denomination either. But when he began preaching in the fields, he fell out of favor with the Anglicans, who preferred things to be done with more decorum.

Wesley was a member of the Anglican Church until the day he died, but he is rightly called the father of Methodism because he and his followers produced a new kind of church. With an experience that “warmed the heart,” Wesley organized converts into “classes” and emphasized the importance of discipleship. The methodical approach to spiritual disciplines used by Wesley and his colleagues earned them the nickname “methodists” and it stuck.

Fast-forward more than 50 years after the Methodist movement came to America and we find a group of people who protested slavery and the heavy rule of bishops in the Methodist Episcopal (ME) Church of that day. The reform efforts of Orange Scott and his colleagues were not well-received. In the first issue of The True Wesleyan, dated January 7, 1843, Scott wrote:

We take this step after years of consideration and with a solemn sense of our responsibility to God. . . . The M.E. [Methodist Episcopal] Church is not only a slave-holding but a slavery-defending church. . . . Is there any prospect that this church will ever be reformed, so long as slavery exists in the country? . . . We step into the breach. . . . Duty is ours–consequences, God’s.

Though not originally intending to start a new denomination, Orange Scott and others withdrew from the ME Church and formed the Wesleyan Methodist Connection.

In the late nineteenth and early twentieth centuries, revivals of holiness swept across the land and as those converts began organizing into churches, the Pilgrim Holiness Church was born. In 1968, Pilgrims and Wesleyan Methodists joined to form The Wesleyan Church.

Neither Luther, Wesley, nor Scott had original intentions to separate from the parent body. Being men of deep conviction, they wanted to reform the church of which they were a part. But reform efforts led to separation.

So what does all this have to do with us today? Fortunately, The Wesleyan Church is healthy. More than 32,000 persons claimed to be born again through our ministries last year in North America. Worship attendance and baptisms are at an all-time high. We have much to commend.

However, until Jesus comes, the challenge will always be to keep our own hearts warm with the love of God, to have compassion for others and zeal to reach the lost and make disciples. On this 500th anniversary (October 31) of Martin Luther’s nailing his 95 theses to the door of the All Saints’ Church in Wittenberg, Germany, let’s personalize the reformation by renewing our own commitment to live in that spirit. Why not pray, as the song writer said, “Melt me, mold me, fill me, use me; Spirit of the Living God, fall fresh on me.”