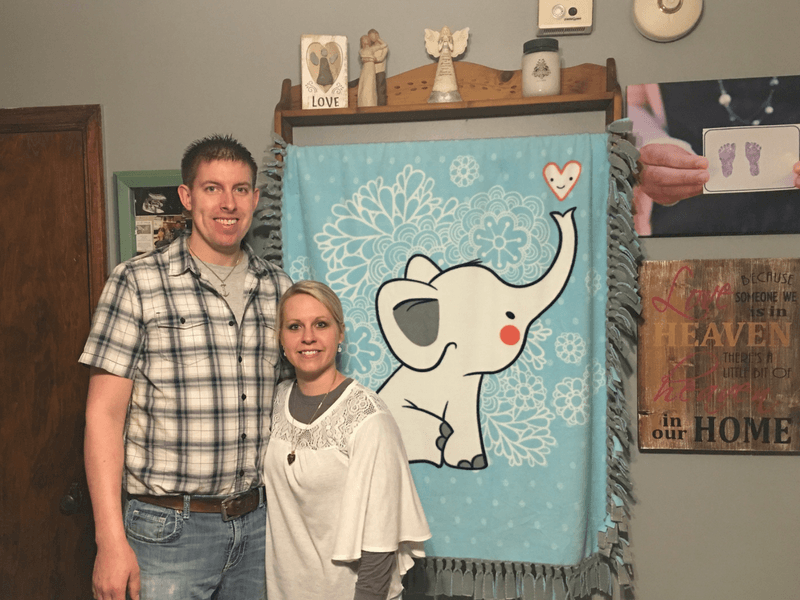 A “rae” of sunshine

After hitting rock bottom after the devastating loss of her preterm baby, a mom finds hope and support at a Wesleyan church in Iowa.

My husband and I were pregnant with our first baby, and on June 6, 2017, we were going to our 20-week ultrasound appointment. My little bump was starting to show.

I felt so much happiness and excitement in expectation of what we would find out. I went to work that day and everyone—including family, friends and co-workers—knew it was a big day for us. We planned to give the envelope with the gender results to a lady who would make a cake for our gender reveal party. Little did we know that day wouldn’t turn out like we had hoped.

Our ultrasound took longer than planned. I looked at my watch. We had been there 90 minutes. The ultrasound tech left the room saying a radiologist needed to check something. The tech had said, “Not to worry—we just want to make sure we have all of the pictures we need, and we want to avoid calling you back later.”

We waited. I finally told my husband to go home because he worked the night shift and hadn’t slept yet. So, he did.

Shortly after he left, a different doctor came in and broke the news—and my heart. Diagnosed with an incompetent cervix, I had to have an emergency surgery that would, prayerfully, keep me pregnant longer so we could save the baby. My husband returned to the hospital as I was transferred to the emergency room.

I prayed every waking minute that God would grant us a miracle, and we would be able to share our story of our baby, a girl, with the world. I had just finished painting the nursery, and we had all the supplies needed. My faith was strong, and I just knew God would give us a miracle. I thought to myself, “There’s no way we won’t be able to bring her home because we are strong in our faith and we are prepared to be parents.”

But during the surgery my water broke.

“I’m sorry, there’s nothing more I can do,” said the doctor. Our baby could not be saved. To have my baby one minute and not the next … it broke me. I felt sad, empty, lonely, shattered and nothing at the same time. Our little girl was perfect without any issues. My body just wasn’t able to support her.

My husband and I named our daughter Gracie Rae. Gracie means to have favor or blessing, and Rae is a feminine form of Ray, like a ray of sunshine. She brought us so much happiness, and we wanted her to have a good name that was fitting—one we could think about with favor and admiration.

I took some time off work, but when my leave was up, I was not ready to return. Life kept moving on, but I didn’t. I felt lost and I was just going through the motions of life. I was devastated and depressed. I even had thoughts of ending my life because I couldn’t possibly see living life without Gracie. I was angry at God, and I stopped praying. I stopped living; I was just existing. I tried to hide how unhappy and sad I was. My husband didn’t understand why I cried so much, and we weren’t connecting as a couple anymore. My life had taken a complete 180-degree turn from where it had been when I was pregnant with Gracie.

Then one day I felt I had to do something. I needed church and needed to connect to something bigger because I had done everything I physically could to deal with this grief of losing a baby.

I had heard about The Bridge Church in Charles City, Iowa, because I had seen a renovation video about it on Facebook. I had also seen the church represented in a local parade the previous summer and everyone looked happy and welcoming. So, I sent a message to the church via Facebook and asked if they had a support group for women who had lost babies.

Rev. Rob Williams messaged back. While they didn’t have a support group, he responded, there were some women in the church who had gone through something similar. I decided to talk to someone.

Pastor Rob gave me a phone number. I put off calling Danae, who had lost multiple babies herself, for months, but worked up the courage to message her on Facebook. I randomly asked her if I could attend church with her and, just like that, we met for the first time on a Sunday morning in a church pew. After that service, we went to breakfast with Danae, her husband and her baby, and she told me more of her story. Since then Danae has been a friend and encourager in my own journey of loss. She has listened to me and validated the grief I’ve known in losing my baby.

The Bridge Church is truly more than just a building. It’s a place where people want to know you and want to engage in life together. People at The Bridge Church welcomed me with open arms, saying “We’re glad you’re here.” My husband, Randy, and I have connected with so many people and have made genuine friends. I’m still working on my faith and trusting God to provide us with a baby in his time and not my own. I’m still praying and learning to give him control of my life. But I like the path I’m on.

I look forward to seeing what God has in store for Randy and me with growing our family. We are so blessed to be on this faith journey with the members of The Bridge Church. I am beginning to experience the warmth of a “rae” of the “son” on my upturned face. It feels good.