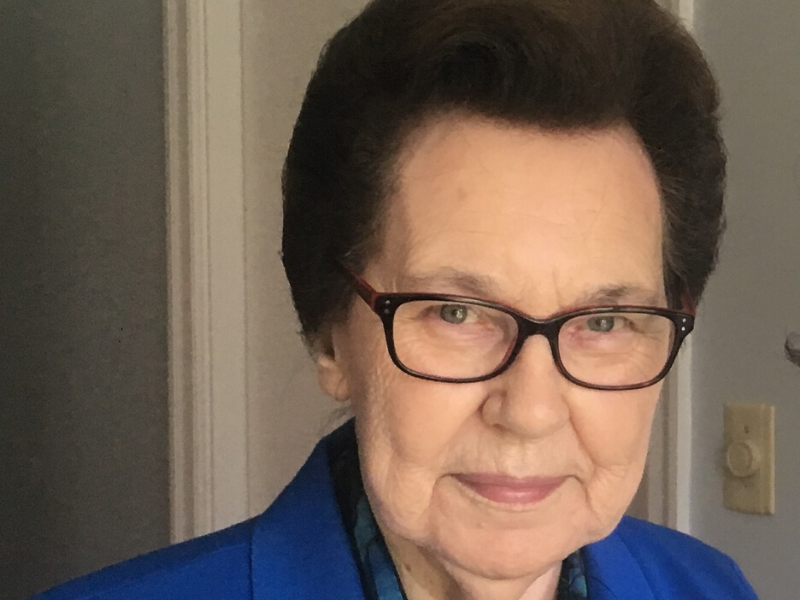 I stood by Janet’s bedside and watched her slowly move towards heaven. I thought, “This cannot be.” I had begun to think of Janet as immortal. In 1992, Janet and her late husband, Duane, a professor of religion at Indiana Wesleyan University, purchased and ran a daycare facility in central Indiana. She ran the daycare up until the week before she died.

Last year, she had a very serious fall trying to get a bug off the ground near the daycare. When she described the fall, I was stunned that she did not have a concussion and broken hip. But, no, Janet only missed one day of work. A short time prior to that, she and Flo Zarates (a friend and daycare employee) were driving on 86th street in Indianapolis and were broadsided by another car. Neither had injuries, and in the proverbial cliché, “both walked away from the accident.”

Janet defied all the images of a woman who was 87 years old. In fact, I watched this in progress the night we brought her into the emergency room. The doctor started talking to her in a patronizing tone, asking questions like, “What do you do with your time?”

In a strong voice, she responded, “I operate a daycare of 150 children with 35 employees, two buses and am at the daycare every morning at 6:20.”

Immediately, his condescending tone stopped, and suddenly, she was his equal. This continued throughout the stay and word spread on the hospital floor and in surgery what she did. She was treated with great love and respect, and the nurses wept when she drew her last breath.

Janet believed a loving God wanted to redeem a broken world. She was in the business of reaching this broken world, making things new in what she touched all her 80+ years. It is this love of Jesus that was transforming to babies, preschoolers and school–age children — even college-aged students. For years, she worked at God’s Bible School in Cincinnati, Ohio, as the dean of women.  There are many funny stories that abound, concerning her approving or disapproving of whom students should date. (Some paid attention and many did not.) She has shared many laughs with the students over the years.

Her first day in the hospital, Flo reminded Janet of a baby she frequently cared for, saying, “He is going to miss you today because you always went in the first thing in the morning and held him, talked to him and he would laugh out loud.”

I couldn’t help but think of Jesus at that moment.

You see, Janet was a disciple of Jesus, and she lived like him.

Children were low in society in his day. He invited them to come to him. He held them and talked with them as his disciples looked on aghast that the man they thought was going to overthrow their current oppressors was playing with children. Then to the disciples’ surprise, Jesus said that unless you become as a child you cannot enter the kingdom of heaven — stunning words they could not grasp.

But Jesus did not mean “childishness.” He meant child–like: exhibiting elements of trust, joy, curiosity, loving freely, forgiving quickly and the list goes on.

I remember Janet telling about a child that was misbehaving in class and was brought into her office. She first listened to the child, then gently and softly — without raising her voice — made the correction, and the child confessed the wrong. Janet then gave the child a big M&M from the special box.

On another occasion, we were to meet for dinner, and she texted to tell me she would be late. Janet was riding the bus that afternoon to escort some of the school children home. I inquired as to why, and she said, “Well, there have been some bigger kids causing some trouble on the bus, and the bus driver cannot — and should not have to — handle it. So, he asked if I would ride the bus because if I am there, they behave properly.”

Jesus was a Friend

You see, sharing these examples is not about illustrating how much Janet knew, but rather, it’s about another dimension: the love of Jesus pouring through her that is unquantifiable, a faithful woman, loving family and friends with abundant generosity.

I think of Jesus and his friendship with Lazarus, Mary, Martha and others. There was loyalty, generosity, the vulnerability that came with suffering with them and, yes, celebrating with them. Janet loved to celebrate. In fact, three weeks before her death, we celebrated just being alive. She and Marlene Beers (a lifelong friend) cooked a great roast beef, carrots and potatoes for dinner, topped off with her famous Derby Pie. As we sat around her kitchen table laughing, telling stories and enjoying each other, we never imagined that that this would be our last meal together on earth.

Janet’s faith was deep, and she could fill books on answers to prayer, understanding even the long prayer — those God answers years later.

But most importantly, Janet was a friend of God and lived like Jesus. The last Scripture I read to her in her good ear (as she would say) was Psalm 23. As I read the portion on death, her eyelids raised. I realized with pain that she was now in that transition.

“The Lord is my Shepherd, I shall not want

He makes me to lie down in green pastures

He leads me beside still waters, he restores my soul.

He guides me in paths of righteousness for his name’s sake.

I will fear no evil for you are with me:

Your rod and staff comfort me.

You anoint my head with oil, my cup overflows.

Surely goodness and mercy will follow me all the days of my life and I will dwell in the house of the Lord forever.

Dr. Jo Anne Lyon is general emerita of The Wesleyan Church. Janet Thompson was her friend for 40 years.